2015 has seen global gas prices steadily grinding lower. The decline has been more orderly than the price plunge in the second half of 2014 that ushered in the current phase of oversupply. But what has changed more dramatically across 2015 is market expectations of a price recovery. The world is getting used to a new phase of lower and more convergent global gas prices.

There has been a pronounced downward revision of future price expectations across the global gas market as 2015 has evolved. This has been reinforced by falling oil price expectations. There is now growing acceptance that the current oversupply of gas is more than just a temporary phenomenon. Demand growth projections are weakening at the same time that large committed volumes of new supply are ramping up. The world is getting used to a new phase of lower and more convergent global gas prices.

At the start of this year we wrote about two key drivers of European gas pricing dynamics in an oversupplied world:

In today’s article we revisit those drivers to assess the current state of the gas market, as well as looking ahead to implications for 2016.

Oil is weighing on hub prices 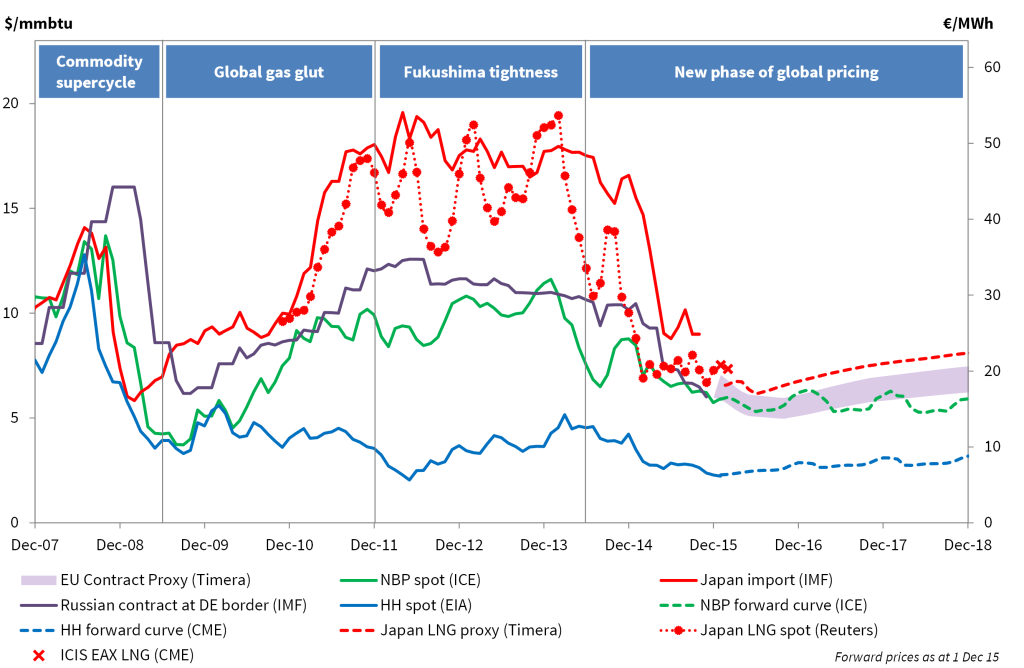 So far there has been almost no evidence of the usual seasonal price recovery as winter approaches. That is partly due to a mild start to winter. But it is also driven by the fact that falling oil prices have dragged down oil-indexed gas supply contract prices as the year has progressed. This is illustrated by the falling German border price proxy for Russian supply contracts in Chart 1 (the purple line). The typical 6-9 month lag in contract indexation means that the oil price declines of summer 2015 are still feeding through in the form of lower gas contract prices.

Another interesting dynamic across 2015 has been the shaping of ‘take or pay’ volumes of contracted gas. Gas buyers have utilised contract volume flexibility to shape volume take into the second half of the year. This is because of the price lag in oil-indexed contracts.

At the start of the year oil-indexed contract prices were at a significant premium to hub prices (given the delayed impact of falling oil prices). This provided a clear incentive to reduce volumes earlier in the year. But it has meant a ramp up in contract volume take as the year has progressed in order to comply with take or pay constraints. This is now weighing on prices as 2015 draws to a close.

Europe now at the center of the global LNG market

The current global oversupply of LNG increases the importance of the linkage between the European and global gas markets. Europe’s role as a market of last resort for surplus LNG means that European hub prices are a key driver of spot LNG prices globally. In turn, the evolution of oversupply in the global LNG market is having an important influence on European hub price dynamics.

LNG spot prices have stabilised across 2015 in a 6.50-7.50 $/mmbtu range. This represents a slight premium to European hub prices, but one that barely covers the transport differential to Asia. As a result, LNG import volumes into Europe have increased significantly.

The linkage between LNG and European hub prices is also being reflected in contract pricing terms, with NBP becoming the global benchmark for transaction price levels. For example pricing of the Egyptian and Jordanian tenders held in the second half of 2015 was driven by NBP, even though the contracts have been struck on a Brent indexed basis.

The Egyptian tender reflects another interesting dynamic in 2015. Although the much anticipated ramp up in global liquefaction capacity started in earnest this year with about 15 bcma of new supply coming online, there has been almost no net growth in LNG supply in 2015. This is largely because of a reduction in supply from existing exporters, particularly in the Middle East and North Africa e.g. Yemen, Egypt, Oman & Algeria.

But don’t expect this dynamic to continue into 2016! More than 40 bcma of new Australian and US LNG exports are due to come online across the next year, combined with an anticipated return in the Angola LNG plant. The wall of new supply to be commissioned from 2016-18 is set to become the real test of European hubs as a global gas price floor.

What does this mean for supply contract pricing?

Market conditions heavily influence the balance of power in gas supply contract negotiation. Gas producers held all the cards in the three years that followed the Fukushima disaster (Q2 2011 to Q2 2014). But price falls over the last 18 months have seen the balance of power shift firmly back in favour of contract buyers. Evidence of this shift can be seen via the increasing success buyers are having in purchasing gas contracts on a hub based pricing terms.

In the LNG market, hub indexation is becoming standard for the sale of short to medium term supply volumes (typically on an NBP or TTF basis). This has been helped by a number of LNG portfolio players which have been caught with surplus gas and been willing to offer relatively flexible indexation terms to shift volume. This has forced producers to follow suit in order to sell uncontracted LNG volumes. European buyers (e.g. E.ON) are now gaining traction in demanding hub indexation on long term LNG supply contracts into Europe.

Producers have also been granting concessions on European pipeline contract pricing. This is indicative of increasing competition between sellers in an oversupplied market. Falling prices have meant that LNG is now a credible alternative source of incremental supply for European gas portfolios. LNG contracts offer diversification benefits and increasingly flexible terms and European buyers no longer need to pay a premium to secure these. It is Russia that most acutely feels the threat posed by cheap LNG.

We end our thoughts for 2015, reiterating the importance of Russia’s strategy in an oversupplied gas market. Gazprom appears to be responding to increasing competitive pressure in a lower price environment. Oil indexation remains its headline policy for the moment, but beneath the ice the tide may be turning. Gazprom’s recent concessions on hub price indexation to a consortium of European suppliers supporting the development of the Nordstream 2 pipeline is a case in point. An increasingly flexible stance on pricing is not a case of Gazprom conceding defeat. It is just a pragmatic commercial response to an oversupplied market.

This is our last article for 2015. It has been another year of substantial growth in readership for the blog. We appreciate your support and are enjoying meeting an increasing number of you face to face at industry conferences and events. We are back at the start of January 2016. In the meantime we wish you all the best for the festive season.