The complex interaction between currencies and European energy markets is a key driver of value and risk. The implications of exchange rate movements are particularly important in the current environment where the threat of systemic risk from the European and US debt crises is causing gyrations in global financial markets. The three key currencies with a pan-European impact are the USD, EUR and GBP..

We explored the broad impact of asset correlations and exchange rate movements on European energy markets in an article last week. As well as the ‘macro’ influence of the current inverse relationship between the USD and global energy prices, exchange rate movements have other important implications for European power and gas markets. This article focuses on the 3 key currencies with a pan-European impact, the USD, EUR and GBP. Other currencies such as CHF, NOK, SEK, PLN and CZK also have an influence but typically at a more regional level.

In order to consider the impact of exchange rate movements it is helpful to consider European markets in several categories as shown in Table 1:

Oil, coal and LNG markets: The European markets for oil and coal are driven by global markets for these commodities which are traded in USD. European LNG prices may be denominated in local currencies but market price dynamics are still driven by competition for LNG cargoes denominated in USD. As such the strength of the USD impacts the purchasing power of European currencies. In addition the strength of correlation between the USD and global energy prices has an important influence.

Consider the example of a strengthening USD (against EUR and GBP). An increase in the USD reduces the purchasing power of European currencies, increasing the cost of coal, oil and LNG in local currency terms. However in the current environment of a strong inverse USD vs. commodities correlation, an increase in USD strength is also likely to coincide with a fall in global energy prices. As long as that correlation holds, the two impacts act to offset each other, although movements in more volatile commodity prices typically outweigh exchange rate movements.

European gas market: The exchange rate influence on the price of gas in Europe is more complex. The European gas market is still essentially a single regional market traded in EUR on the Continent and GBP in the UK. However the impact of movements in GBP reaches well beyond UK borders because of the dominance of UK NBP forward market liquidity in driving pricing at continental hubs (e.g. TTF, NCG). If GBP strengthens against the EUR then continental gas prices will rise accordingly given physical flow arbitrage across spot hubs. This relationship is so strong that some trading desks rely on it, using NBP as a direct hedge for continental hub positions without explicitly hedging the EUR-GBP currency exposure.

The USD is also a key driver. Global LNG prices typically priced in USD are increasingly influential in determining European hub prices given Europe’s rising import dependency. As a result movements in the USD are an important factor in determining European LNG pricing. If the EUR depreciates against the USD it erodes Europe’s ability to compete for available LNG in the global market (particularly against Asia). The USD influence also comes through the oil indexation of long term gas contracts. While spot indexation is becoming more common, the majority of long term gas contracts are still indexed to oil products (primarily gas oil and fuel oil) denominated in EUR. However the price of these oil products is set in global markets in USD terms so changes in the EUR-USD exchange rate directly impact the contract price.

European power markets: Power markets are regional and priced in local currency terms. But power prices are to a large extent driven by the variable cost of marginal thermal generation. So the impact of exchange rate movements on power prices is driven primarily through the impacts on fuels (particularly coal and gas) and carbon prices. In addition exchange rates impact the spread between power prices across interconnectors between the Eurozone power markets and the UK, Scandinavia, Switzerland and Eastern Europe.

In last week’s article we considered a simple example of a UK coal buyer with a short coal exposure. This week we extend this logic using a case study to explore the impact of exchange rate movements on asset exposures. Thermal generation assets are interesting because generation margins are driven by the spread between power, fuel and carbon prices. In other words margins are driven by relative rather than absolute price levels. Coal-fired power plants are particularly interesting as the fuel leg of the spread (coal) is priced in USD.

The generation margin of a coal plant in the UK is driven by its exposure to the clean dark spread (CDS), the difference between the price it receives for power and the cost of generating it (we explore the value of UK coal plant in more detail here). This CDS exposure can be deconstructed into five key market risk factors: power price (GBP), coal price (USD), carbon price (EUR) and the EUR-GBP and GBP-USD exchange rates. While it is easier to aggregate the two exchange rate risk factors (EUR-GBP and GBP-USD) into the carbon and coal price respectively, this approach ignores the important impact of correlations between exchange rate movements and the underlying commodities. 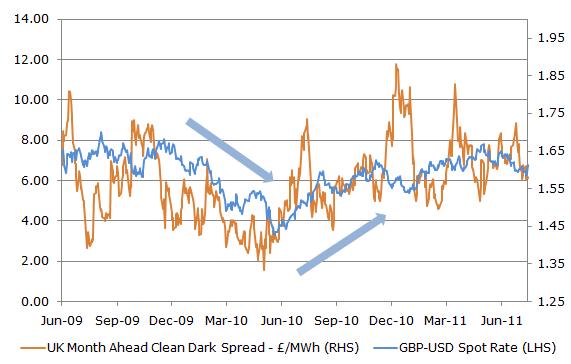 The first phase of the European debt crisis evolved from Dec 2009, when Greek credit ratings were slashed, to Jun 2010 as the threat of contagion across European periphery markets (e.g. Ireland, Portugal & Spain) started to recede as policy actions were taken to stabilise the situation. Over this period GBP fell by approximately 12% against the USD. The CDS also fell over this period, with the fall in GBP-USD contributing by increasing the cost of coal in GBP terms by over £8/tonne. Although there are clearly other factors influencing the CDS over this period, as an indication an £8/tonne increase in coal cost is equivalent to a 3.4 £/MWh reduction in the clean dark spread. As policy actions stabilised the crisis GBP-USD recovered, commodity prices moved higher (note the inverse USD correlation) and the CDS also recovered. It will be interesting to watch the evolution of the CDS vs USD relationship as the next phase of the European debt crisis evolves.

The complex interaction between currencies and European energy markets is a key driver of value and risk. The implications of exchange rate movements are particularly important in the current environment where the threat of systemic risk from the European and US debt crises is causing gyrations in global financial markets.