The global LNG market is entering a period of rapid expansion. The volume of global liquefaction capacity is set to double over the next decade, requiring around $1 trillion of new investment. The end result of this period of rapid evolution should be price convergence across regional hubs. New LNG infrastructure will drive an increasingly dynamic market in traded cargoes and a strengthening of global gas price influence on regional markets. But there is considerable uncertainty around the path of evolution that the LNG market will follow over the next decade. This article summarises five factors that we think will be key to determining that path.

The global LNG market is entering a period of rapid expansion.  The volume of global liquefaction capacity is set to double over the next decade, requiring an estimated $1 trillion of new investment.  The force behind this expansion is a shift towards gas as a fuel of choice and an increase in the import dependence of regions facing declining domestic reserves.  We have written several articles (links at the bottom of this one) focusing on the dynamics behind the rapid evolution of the global LNG market.

However it is important to recognise the global LNG market is still in a stage of relative infancy.  Only a small portion of global gas consumption is currently satisfied by LNG (around 9% as illustrated in Chart 1).  Only a portion of those LNG cargoes have the contractual flexibility for diversion in response to price dynamics, although these flexible cargoes can have a disproportionate influence on global gas prices given their influence on marginal pricing.  This lack of global LNG cargo flexibility is currently reflected in the regional price divergence across Asia (tight market post Fukushima), Europe (broadly tracking oil-indexed contract supply) and the US (flooded with domestic shale gas) as we set out here.

Chart 1: A geographical summary of the global gas market 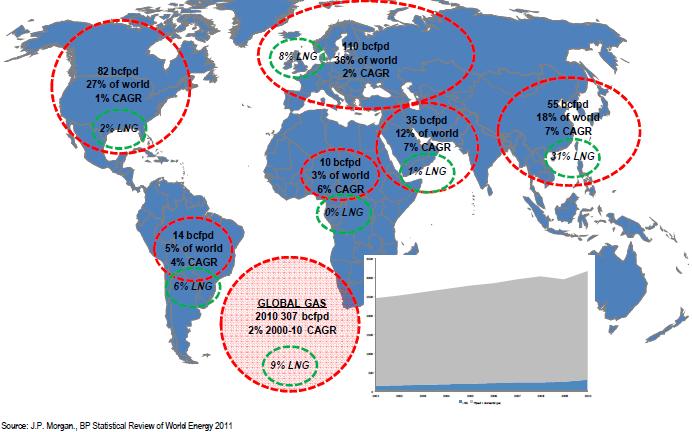 The end result of this period of rapid evolution in the LNG market should be price convergence across regional hubs towards transport differentials.  New LNG infrastructure will drive an increasingly dynamic market in traded cargoes and a strengthening of global gas price influence on regional markets.  But there is considerable uncertainty around the path of evolution that the LNG market will follow over the next decade.  This article summarises five factors that we think will be key to determining that path.

Around 70% of liquefaction capacity currently under development is located in Australia.  If this capacity is brought to market as planned then Australia is set to overtake Qatar as the world’s largest exporter of LNG by the end of this decade.  Australia has an abundance of gas resource, but its weakness is high project costs.  Gas is relatively expensive to produce and transport to the liquefaction terminal, not helped by high labour costs and unprecedented strength of the Australian dollar.  Australia projects are currently satisfying incremental demand growth from a gas hungry Asia.  But there are two key threats to project development: exports of cheaper gas from the US and a slowdown in Asian demand growth (see below).

We have previously written about the evolution of US LNG exports and their impact on global pricing.  While the US is currently awash with relatively low cost gas, uncertainty remains as to whether the government will approve large volumes of US exports and the sustainability of the US shale gas revolution.  The extent to which exporters are granted approval and whether the industry can overcome shale gas environmental concerns and grow or even maintain production levels will be key factors influencing re-convergence of global prices.

None of Japan’s 50 nuclear reactors that were closed after the Fukushima disaster are currently in operation.  Given Japan is the world’s largest LNG importer, nuclear closures have been a huge factor driving tightness in the Asian market.  While the increase in Japanese demand has been dramatic, it is a one-off factor whose impact will diminish over time.  The Japanese economy, already suffering from decades of stagnation, is being crippled by the strength of the yen and the cost of imported energy.   The decision was made last week that the first of Japan’s reactors will return to service this summer.  The pace of return of the remaining reactors, a subject of intense political debate in Japan, will be a key driver of Asian demand over the next few years.

If the penetration of gas increased by just 1% in China’s primary energy consumption (from 4 to 5%) it would mean an increase of approximately 27bcma of gas demand.  If that volume were to be met by LNG alone, it would mean an increase in imports of 20MT per year.  However while the headline numbers are startling, there is considerable uncertainty over the rate of China’s policy driven switching from coal to gas fired generation, particularly as the economy slows.  There are also a range of alternative sources of gas to satisfy Chinese demand, specifically pipeline imports from neighbouring countries (Turkmenistan, Kazakhstan, Burma and Russia) and domestic shale gas resource.  For more on Chinese LNG demand see here.

Another global recession looks increasingly likely as a result of a slowdown in the rate of Asian growth and political deadlock over European debt crisis resolution.  While this is a key source of uncertainty impacting all energy markets, the LNG market is particularly exposed.  A sharp fall in Asian growth would have a disproportionate impact on global LNG demand given that Asia is the key driver of incremental demand growth.  At the same time LNG supply development is vulnerable to tightening capital constraints from a deterioration of the financial crisis, given that liquefaction projects are very capital intensive.

Putting the pieces together

There can be little doubt that the rapid evolution of the LNG market will increase the influence of global pricing on regional gas markets this decade.  The complexity and uncertainty around the interaction of global gas market drivers presents an interesting challenge from an analytical perspective.  But developing an effective analytical framework is by no means an insurmountable task.  In our view the key to success comes from focusing on understanding how macro drivers interact to impact LNG market evolution and pricing dynamics.  Putting some numbers and boundaries around the five factors set out in this article is a good place to start.

The influence of new LNG importers on the global market

Will US LNG exports revolutionise the global gas market?