Getting to grips with intermittency

An OIES take on the issue

An Oxford Institute for Energy Studies (OIES) report titled “The Impact of Import Dependency and Wind Generation on UK Gas Demand and Security of Supply to 2025” (Ref 1), penned by Howard V Rogers last year, takes a detailed look at these issues in the UK context.  The basic methodology applied by Rogers was as follows:

Modelling boffins might argue that the above methodology was over simplistic and that a detailed fundamental market model is required to do the problem justice.  However, the elegance of Rogers’ analysis is its simplicity and transparency.  This neatly side steps the distraction of uncertainty over the detailed modelling methodology and input assumptions.  More importantly it directly addresses the real issue with intermittency which is renewables load uncertainty in the very short term.  By contrast, many long term fundamental models will be set-up to work on an expected outcome basis and work with average renewables generation (or derated capacity).

The OIES report offers some striking illustrations of the potential impact of intermittency.  The charts below show the daily generation patterns of the different capacity types for 2015 and 2020 from Rogers’ analysis.

The charts above clearly show the impact of increasing levels of intermittent wind (green) on the absolute level and variability of gas fired generation (red).  This variability will be directly exported to the gas market as gas swing demand for power generation.  The picture becomes becomes even more extreme when viewed at hourly granularity.  The chart below shows the analysis for a charateristic week in 2020.

However it does raise some important questions as to the required levels of reserve during periods of high wind output and the increased probability of National Grid being required to constrain off wind capacity.

At a higher level, the key conclusions from Rogers’ report are as follows:

The first three conclusions offer a good, if uncontroversial, summary of the issues but the most eye catching conclusion is clearly the last.  It poses an interesting question as to how soon the UK could reach this implied cap.  The greatest uncertainty is clearly the assumed build rates for both onshore and offshore wind.

The assumptions in the OIES analysis were largely based on data from DECC’s 2050 Pathways Analysis (published in 2010) which, consistent with its purpose, assumed a very aggressive path to decarbonisation, in large part delivered by a step change in renewables build rates.  As illustrated in the chart below, previous Timera Energy analysis based on simple extrapolation of historical build rates suggests that getting anywhere near DECC’s assumed levels is highly unlikely unless there is a step change in policy support for renewables. 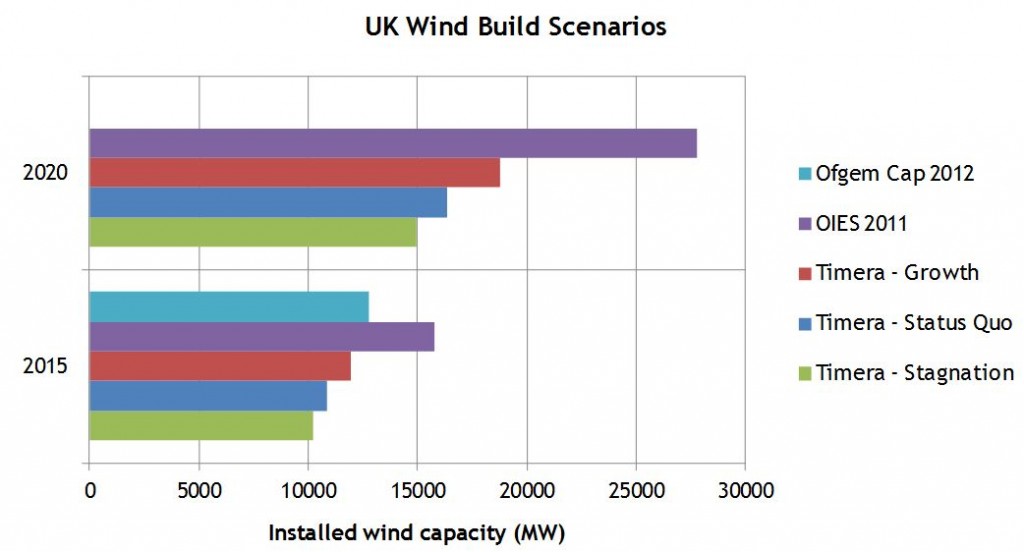 As the reality of the UK’s finances begins to bite and the inherent tension between austerity and decarbonisation policies comes to a head, DECC’s aggressive build assumptions feel increasingly optimistic. In contrast, Ofgem’s assumptions on wind build in its recently published Electricity Capacity Assessment report (Jul 2012) were closer to our more conservative build rate assumptions (included in the chart above for 2015 only as Ofgem’s study covered the period to 2016/17).

The other side of the equation is the level of available flexible capacity to manage intermittency.  The Ofgem report highlighted the increasing awareness of the potential for a capacity crunch mid decade.  In our view there is also a significant risk that a number of older CCGT plant are closed by the middle of the decade.

Irrespective of renewables build rate uncertainty, the OIES analysis highlights the structural changes in generation and market price dynamics that will increasingly dominate the UK market.  These factors will be overlaid on weather sensitive demand and plant availability that have historically dominated prompt fundamentals, prices and volatility.

It is worth recapping what some of the broader implications are likely to be for the market:

How far will the UK fall short of its renewable generation target?