For the last 12 months, the dominant price trend in European power and gas markets has been downwards as global commodity prices have declined and Europe has fallen back into recession. But since the end of June, commodity prices have staged a recovery on the back of a barrage of new intervention measures from central banks and the Chinese government. But will this form the foundations of a longer term recovery in commodity prices?

For the last 12 months, the dominant price trend in European power and gas markets has been downwards as global commodity prices have declined and Europe has fallen back into recession.  But since the end of June, commodity prices have staged a recovery on the back of a barrage of new intervention measures from central banks and the Chinese government.

Central bankers have a reputation for choosing their words carefully.  But the rhetoric that has accompanied recent intervention has verged on defiance.  Both the ECB and the Federal Reserve have made declarations of open ended monetary intervention accompanied by statements along the lines of “we will do whatever it takes”.  But will this form the foundations of a longer term recovery in commodity prices?

The markets for hydrocarbons

Global market prices for hydrocarbons (oil, gas and coal) are the primary driver of the cost of energy supply in Europe.  We have written previously about the ‘risk on’ vs ‘risk off’ mentality that has been a feature of global financial markets since 2008, as the influence of central bank monetary stimulus has increased.  The resulting high levels of correlation between movements in commodity prices and other global asset prices (e.g. equities, bonds, currencies) has continued to be a dominant force.

But within the hydrocarbon based commodity markets there has been an interesting divergence taking shape in 2012:

Despite these differences, the renewed bout of financial market intervention has emerged as an important factor driving price movements over the last three months.

There have been 3 substantial market intervention programs announced since the end of June:

The Chinese stimulus package is relatively small in size (less than a quarter of the 2009 stimulus) and is likely to exacerbate the overcapacity and credit issues that China faces rather than stimulate a sustainable pick up in growth.  For an interesting overview of issues with further Chinese stimulus see here. 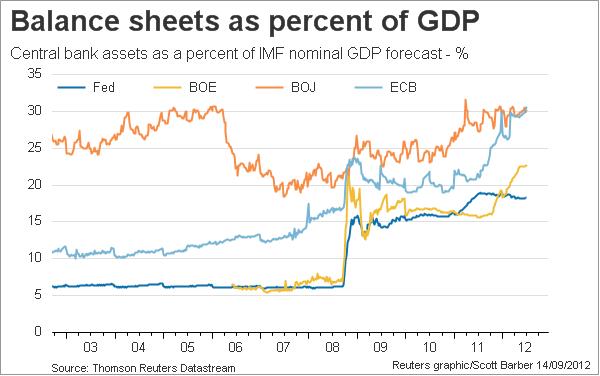 While this intervention is impressive in its scale, what matters for commodity markets is sustainable economic growth.  Monetary expansion may have prevented the global financial system from spiralling downward into cardiac arrest, but the lasting benefits for economic growth are less clear.

Opiates may temporarily help with the symptoms but are of little benefit without some surgery to address the underlying illness.  Far from this, central bank intervention has taken the pressure off governments to address the structural issues that caused the financial crisis: a dependence of economic growth on debt fuelled investment and consumption.

Regardless of the merits of monetary stimulus, central banks are now working against a cyclical global downturn in economic growth.  Diagram 2 shows a key indicator of industrial economic strength, the Manufacturing Purchasing Managers Index (PMI).  Both the European and Chinese PMIs have been contracting (a reading below 50) for the last 18 months.  This has been the driving factor behind weakening global commodity prices and there is little evidence of any positive impact from the increase in stimulus shown in Diagram 1. 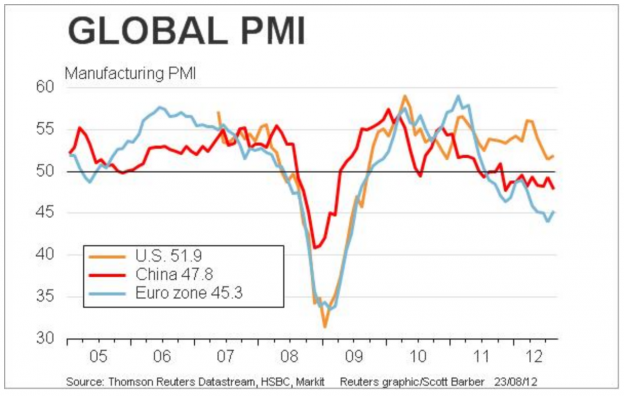 The mechanism that fuelled growth prior to the financial crisis looks to be broken.  Despite central banks engineering historically low interest rates, consumers and companies in developing economies are focusing on repairing their balance sheets rather than borrowing to invest or consume.  The debt overhang across most of the developed world is acting as a brake on economic growth.

Importantly for commodity markets, this slowdown is weighing on Asia, where economic growth has relied on foreign investment and consumption.  Marginal demand growth in Asian economies has been instrumental in driving the price of coal, LNG and most industrial commodities over the last decade.  Monetary intervention may cause some short term pain relief in global commodity markets.  But it is not going to address the structural issues that lie behind weakening commodity prices.

Global commodity markets: focusing in on oil, coal and gas