2013: Study the past if you would define the future

As 2013 has evolved, consensus has strengthened around a number of market views on energy market pricing dynamics. For example, the global gas market will rema

2013: Study the past if you would define the future

With Christmas rapidly approaching this is the last blog article for 2013.  We will be back next year on the 6th January.  But to finish off this year we take a step back and review 2013 energy pricing dynamics with a view to trying to better understand what may lie ahead. We also explore how a macroeconomic shock might upset current energy market trends.

Last decade was characterised by correlated movements in global energy prices.  There were some substantial price swings, focused around the boom and bust of the commodity ‘supercycle’.   But the pricing of oil, coal and gas largely reflected changing market views on the impact of emerging economy demand for energy, particularly with respect to China.

Oil, coal and gas prices have regained some of their independence this decade.  2013 has seen coal prices decline a further 20% as Chinese import demand has continued to slow.  Brent crude prices on the other hand have bucked the 2013 trend of falling commodity prices, remaining remarkably resilient against a backdrop of elevated unconventional production costs and continuing tensions in the Middle East.  For all the swings in spot crude prices, the back end of the Brent curve has remained firmly anchored around 85-90 $/bbl.

While the oil and coal markets are truly global in nature, significant regional price differentials have remained across the global gas market in 2013, as shown in Chart 1.  These price differentials largely reflect constraints in the ability to move gas from the Atlantic Basin (particularly North America) to Asia. But 2013 has seen the firming prospect of substantial volumes of US exports in the second half of this decade.  In our view these US exports are set to have a major impact on the global gas market. 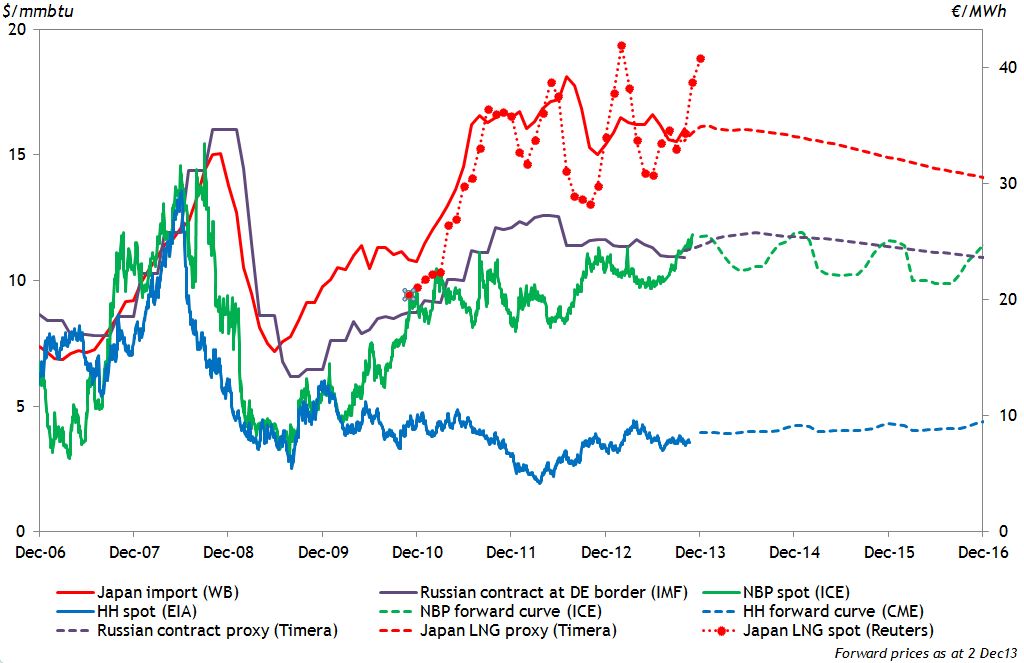 With an absence of new liquefaction capacity and feed gas issues, the post-Fukushima global gas market remains tight.  Flexible European LNG supply has continued to be diverted to higher priced markets in 2013. But this has done little to temper the price premium of Asian and South American LNG over Europe. Spot LNG prices have remained volatile across 2013, although they have broadly reflected seasonal Asian demand, with prices currently strengthening again into the Asian winter.

Within Europe, hub prices have evolved in a manner consistent with oil-indexed contract pricing.  This oil-linkage has been supported by the diversion of flexible LNG supply and negotiated discounting (~10%) of a number of Russian oil-indexed swing contracts.

With European gas hub prices supported by oil, the 2013 fall in coal prices has seen a continued erosion of gas generation margins and load factors.  As a result of this and the continued expansion in renewable capacity, the relationship between coal and power prices has strengthened, particularly in Germany.

The last decade has seen dramatic shifts in price behaviour across oil, coal and gas markets.  In the context of this period the last two years have been relatively stable.  The trends of 2012 have broadly remained in place for 2013. Market consensus suggests these trends will continue into 2014.  But how useful is this as a guide?

Market consensus as a guide to the future

Looking forward into 2014 and beyond we are struck by a number of strong consensus market views.  For example:

Strong cases can be made for each of these views and they may turn out to be right.  But looking at the deviation of outcomes from consensus views across recent history (e.g. ‘supercycle here to stay’ – 2007, ‘global gas glut to last years’ – 2009), there is certainly the risk of some major surprises. One strong potential candidate to shock the status quo is an unhappy ending to the current burst of global monetary expansion.

2013 has seen yet another remarkable central bank sponsored increase in the availability of money.  The impact of this unprecedented global experiment in monetary expansion has not been specific to energy markets.  But it is sure to be a key factor shaping the evolution of energy markets going forward.

The competitive nature of monetary expansion has become clearer as 2013 has progressed, as shown in Chart 2.  Japan threw down the gauntlet in April with a promise to double its monetary base across the next two years.  Europe has paid the price with a sharply appreciating currency, although the ECB is in the process of trying to respond by further easing the cost of money.  And despite a rapidly declining budget deficit in the US, the Federal Reserve appears as enthusiastic as ever to provide liquidity by purchasing debt (taper or otherwise).

Chart 2: Central Bank balance sheets as a % of GDP 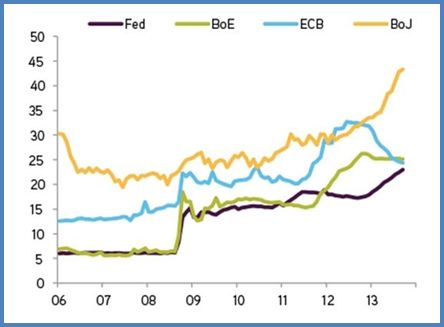 The result of the open liquidity taps has been a remarkable rise in financial asset prices in 2013.  The US benchmark S&P 500 stock market index has increased by about 25% to new all time highs.  Perhaps more importantly for energy markets, credit spreads in the developed world have compressed dramatically, reducing the cost of capital.  But these moves have been in stark contrast to a fall in commodity prices across 2013, with the benchmark CRB commodity index declining by about 10%.

Monetary expansion on this scale is a force to be reckoned with.  It may well ensure these market price trends continue through 2014.  But we suspect that it is the prices of commodities rather than financial assets that reflect the true state of the global economy.  Behind the purple haze of liquidity, there has been little in the way of structural economic reform to address the causes of the last financial crisis.  And with its 5 year anniversary approaching in March 2014, history suggests the current economic cycle is getting long in the tooth.

Perhaps the most important impact of the current liquidity boom is its distortion of the true cost of credit.  As 2013 has progressed, global markets appear to have increasingly priced in the continuation of cheap credit conditions over a long term horizon.  Low borrowing costs and low returns are again encouraging a boom in investor risk appetite.  Deja vu 1998/99, 2006/07.

As a result, the global economy looks increasingly vulnerable to a shock that causes the market pricing of credit to reassert.  But the monetary and fiscal response over the last 5 years has left central banks and governments ill-equipped to fight the next downturn.  Whether that downturn arrives in 2014 or later, the effects of global monetary expansion are likely to be a key driver of energy market evolution and perhaps the source of a major shock to market consensus.

An economic shock and energy markets

Exploring potential shocks to current market conditions is not an attempt to predict the future.  Rather it is a prudent exercise in risk management.  One powerful lesson from the last decade is that consensus views on energy market evolution are easily shattered.  So there is a clear benefit from challenging (or stress testing) commercial decisions and portfolio construction with an open mind as to future outcomes.

Defining relevant scenarios is of course company and portfolio specific.  But for example, what would the impact of one or more of the following outcomes be:

Sound arguments can be made against each of these outcomes.  But before you discard them as impossible, think back to some of the shocks over the last decade; the commodity supercycle, fracking, the global financial crisis and Fukushima.  We subscribe to the old adage; it is dangerous to rely on forecasts, particularly about the future.

2013 has been another great year of readership growth for the Blog and we have again been widely published in the industry press (e.g. Energy Risk, Commodities Now, LNG Industry, Reuters).   We look forward to continuing in January.  In the meantime, thanks for your support and all the best for a Happy Christmas and relaxing break.