There is set to be a shift in the tectonic plates of the global LNG market in the second half of this decade. Large volumes of new supply in Australia, Canada

There is set to be a shift in the tectonic plates of the global LNG market in the second half of this decade.  Large uncontracted volumes of new supply in Australia, Canada and East Africa are competing with US export projects to serve what is anticipated to be strong growth in import demand, particularly from developing economies.

However there is little in the way of new LNG supply that will come into the market before 2015.  So the dynamics over the remainder of the first half of this decade are likely to be quite different.  The rapid expansion of new liquefaction capacity over the 2009-11period is now over and LNG supply in the medium term looks to be relatively inelastic.  The evolution of LNG pricing over the next two to three years will to a large extent be determined by fluctuations in demand from uncontracted buyers (e.g. China, India, Brazil and Argentina) as well as Japanese nuclear restarts.  An analysis of incremental supply and demand in 2012, services as a useful indication of things to come over this medium term horizon.

A decline and shift in global supply

Chart 1 shows a snapshot of incremental changes in supply over the 2012 year. 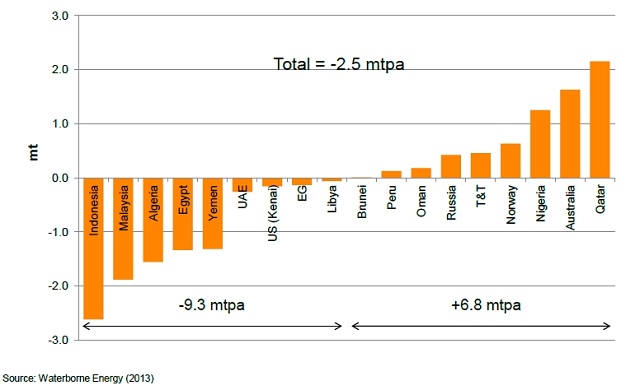 There are two key factors at work.  A number of developing countries that are existing LNG exporters, are struggling with feedgas issues (e.g. Indonesia, Algeria and Egypt).  Strong domestic gas demand is eating into the feedstock for LNG export terminals.  Contractual obligations are typically being met, but there has been a reduction in uncontracted gas exports.  As an offset to this decline in supply, there have been several new LNG projects that have come online (e.g. Pluto in Australia) or existing LNG facilities that have increased exports.  But the net effect is clear.  Global LNG supply declined in 2012, a rare event historically in what has been a rapidly expanding market.

Chart 2 shows a snapshot of incremental changes in demand over the 2012 year. 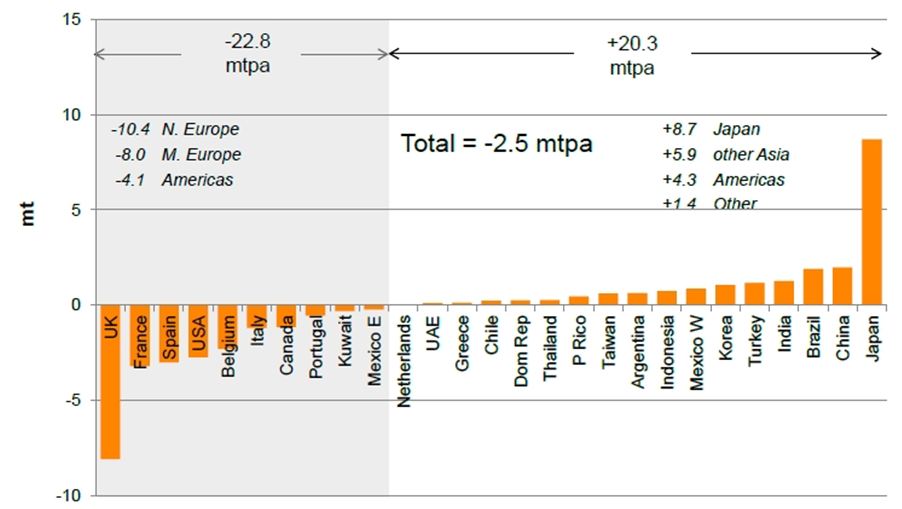 A clear trend can be seen from this data, with spot market buyers paying a price premium to attract supply away from Europe (and to a lesser extent North America).   Japan is an outlier with its 2012 demand reflecting a continuation of LNG purchases to make up the shortfall of gas post Fukushima.  But the other incremental buyers of LNG tend to be developing economies with relatively low levels of long term contract cover.

Any changes in the trends shown in 2012 will likely accompany a change in price dynamics.  An increase in feedgas issues or a rise in developing economy demand could materially tighten the global market and increase the spot price premium over European hubs.  On the other hand, a weakening in Asian growth or a sharp decline in Japanese demand due to nuclear restarts could drive global LNG spot price convergence.  The 2012 snapshot provides a useful insight into the drivers that are likely to prevail in the LNG market over the next 2 to 3 years.