We set out some key numbers driving oil market supply, demand & pricing dynamics and look at how a looming price surge may well accelerate decarbonisation.

Step back to May 2009 in the aftermath of the financial crisis.  A prominent keynote speaker at a leading European energy conference gives a speech to a hall full of senior energy industry representatives. In his speech he sets out two bold conclusions:

The first conclusion was a prescient call, which was far from obvious to most of the audience at the time.  The second conclusion was deeply flawed. Brent was around 50 $/bbl at the time, on its way back above 120 $/bbl. So what did he miss?

The ‘decarbonisation will drive oil prices lower’ narrative remains prominent.  In today’s article we are going to argue the other way: that oil prices are likely to rise, but in doing so accelerate decarbonisation.

Pretty much everyone now agrees that decarbonisation spells terminal decline for oil production, it’s a question of when not if. However for the time being, global oil demand looks set to hit new records (probably by next year).

Oil demand will likely peak sometime in the mid to late 2020s. The exact timing of this peak is an interesting pub conversation, but not really that relevant.

If you are interested in oil prices, what matters most is how supply and demand dynamics play out across the next decade and their impact on the pricing of the marginal barrel of oil. Three factors will play an important role in determining this:

The first of these factors will substantially erode oil demand over time. But the second and third factors could drive oil well above 100 $/bbl in the next 3-5 years.

The interesting circularity in play is that higher oil prices are likely to accelerate permanent substitution to other energy sources. This is particularly true for electrification of transport given increased competitiveness of electricity (e.g. for EVs) and even hydrogen as oil prices rise.

A summary of the oil market balance

Chart 1 shows a very high level view of the current demand & supply balance, focusing in on the margin where prices are set. 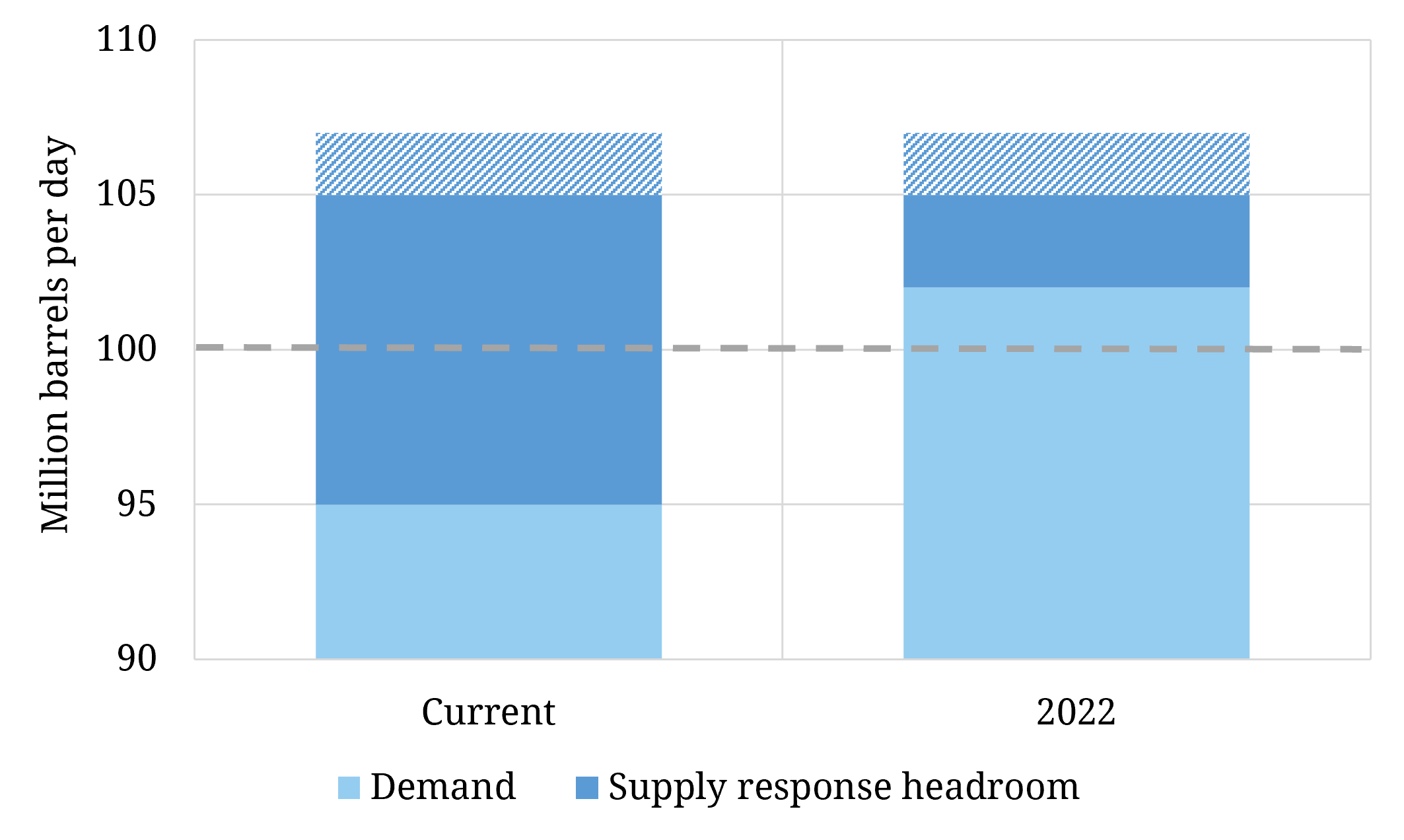 And a couple of key numbers behind global supply response:

To frame how tight the crude market currently is, there is roughly 10-12 mbpd of production headroom across OPEC + Russia + US shale upside. Around 5-7 mbpd of that headroom is likely to be eaten up by 2022 (assuming global demand is 102 mbpd). That leaves only 3-5 mbpd next year, which if oil demand remains strong could well be eroded by 2023-25.

At the point production headroom is absorbed, the oil market supply curve becomes pretty inelastic (unresponsive to price), with demand destruction the main short term mechanism to balance the market.  That could mean much higher spot crude prices.

A backwardated curve reflects the fact that the market is paying a premium for near term delivery of oil. That is a sign of near term demand strength and / or constraints on supply response. Curve backwardation is usually bullish.

Chart 2 shows the evolution of the Brent crude futures curve across the last few months and how backwardation has become more pronounced as spot prices have risen. 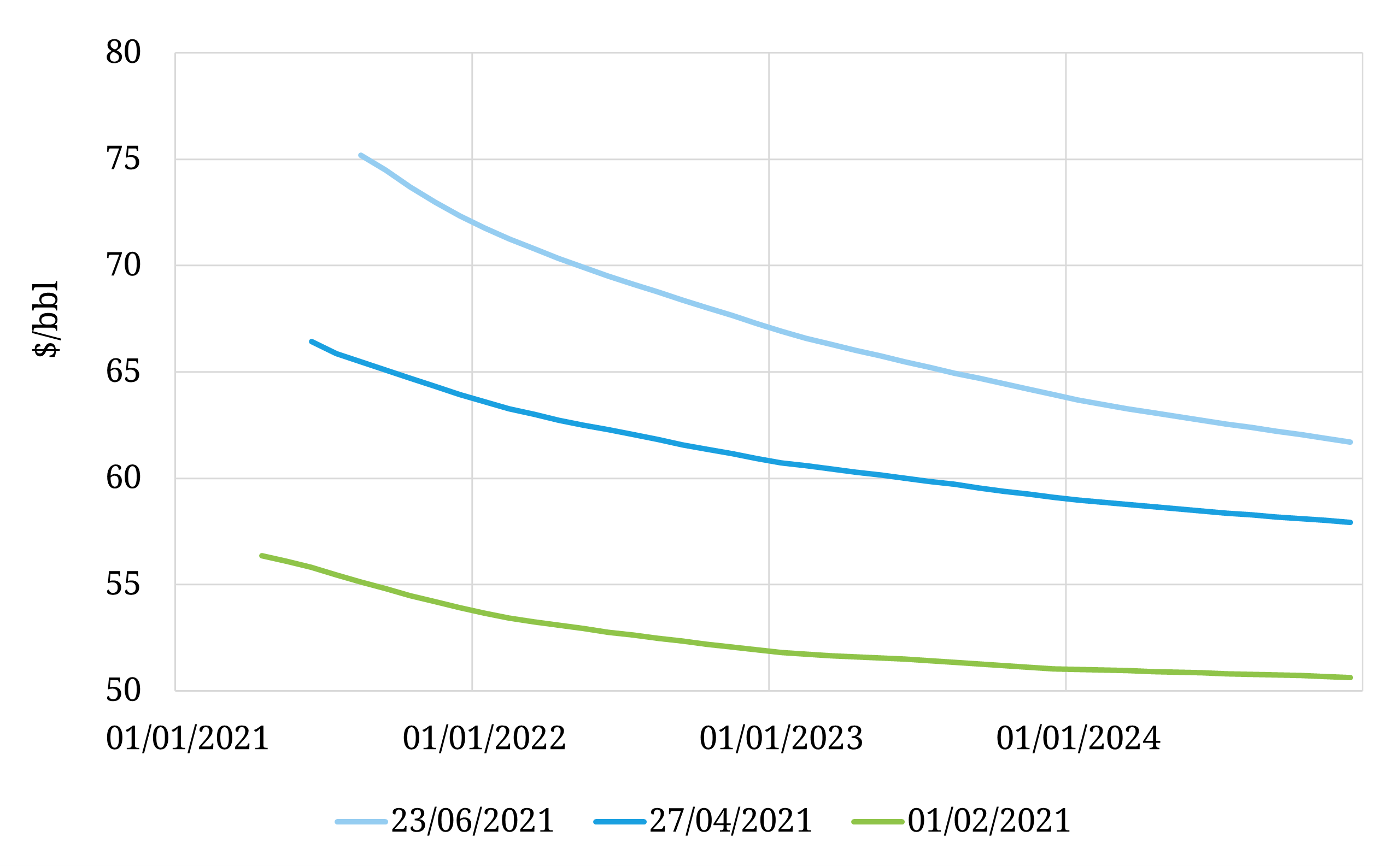 For the last decade, longer dated crude prices (e.g. 3 – 5 years forward) have been anchored by US shale production cost dynamics. Pre-Covid crash, this anchor was around a 55-60 $/bbl range for Brent (see our Brent curve animation here for a clear visual).

This anchoring of the curve reflects the fact that US producers hedge shale well investments typically around 2 years forward, to support financing of capex required to drill.  If longer dated prices rise to the top of the anchor range, it supports hedging and drilling of more wells. If prices fall to the bottom of the range, investment is choked off.

Why crude prices may be set to surge

US shale investment dynamics have driven a neat and reliable mechanism to anchor the crude curve… until Covid. Across the last year there are 3 factors that have been impacting curve anchor dynamics:

All three of these factors mean higher costs & barriers for investing in US shale.  That is reflected in a subdued US rig count and completed wells, despite sharply higher prices in 2021. In case you are wondering about broader investment in conventional oil plays, these have multi-year lead times and have been at very low levels since the 2015-16 price crash.

The oil market looks like it is about to test the supply response of US shale producers as longer dated prices rise. It will be very interesting to see what the new anchor range may be given the three factors above, it could be closer to 70-80 $/bbl for Brent.

Even if the long end of the curve remains anchored by shale, there is a significant delay (1 – 2 years) in response to bring on new US production. Across this period, spot prices could easily surge above 100 $/bbl, with demand response driving marginal pricing.

Crude prices fell a blistering 50% in the first two weeks of March. We look at the impact on LNG contract and market pricing dynamics.
Read more
Featured Article
27 Apr 2020

We look at negative crude prices, the current state of play in the gas market and whether negative gas prices are on the way too.
Read more