We look at the impact of surging carbon prices on German thermal plant closure economics and consider the impact on capacity mix transition & power prices.

2021 has seen a relentless rally in EUA carbon prices, as Europe raises the bar on emissions reduction.

In 2020, Germany set out a regulatory driven timeline to close its fleet of coal & lignite plants by 2038. Carbon prices at current levels are likely to precipitate closure at a much faster rate, in Germany, as well as in its large exporting neighbours, Poland and the Czech Republic.

It is time to consider what could happen to the German power market (and its neighbours) if coal closures accelerate across the 2020s. 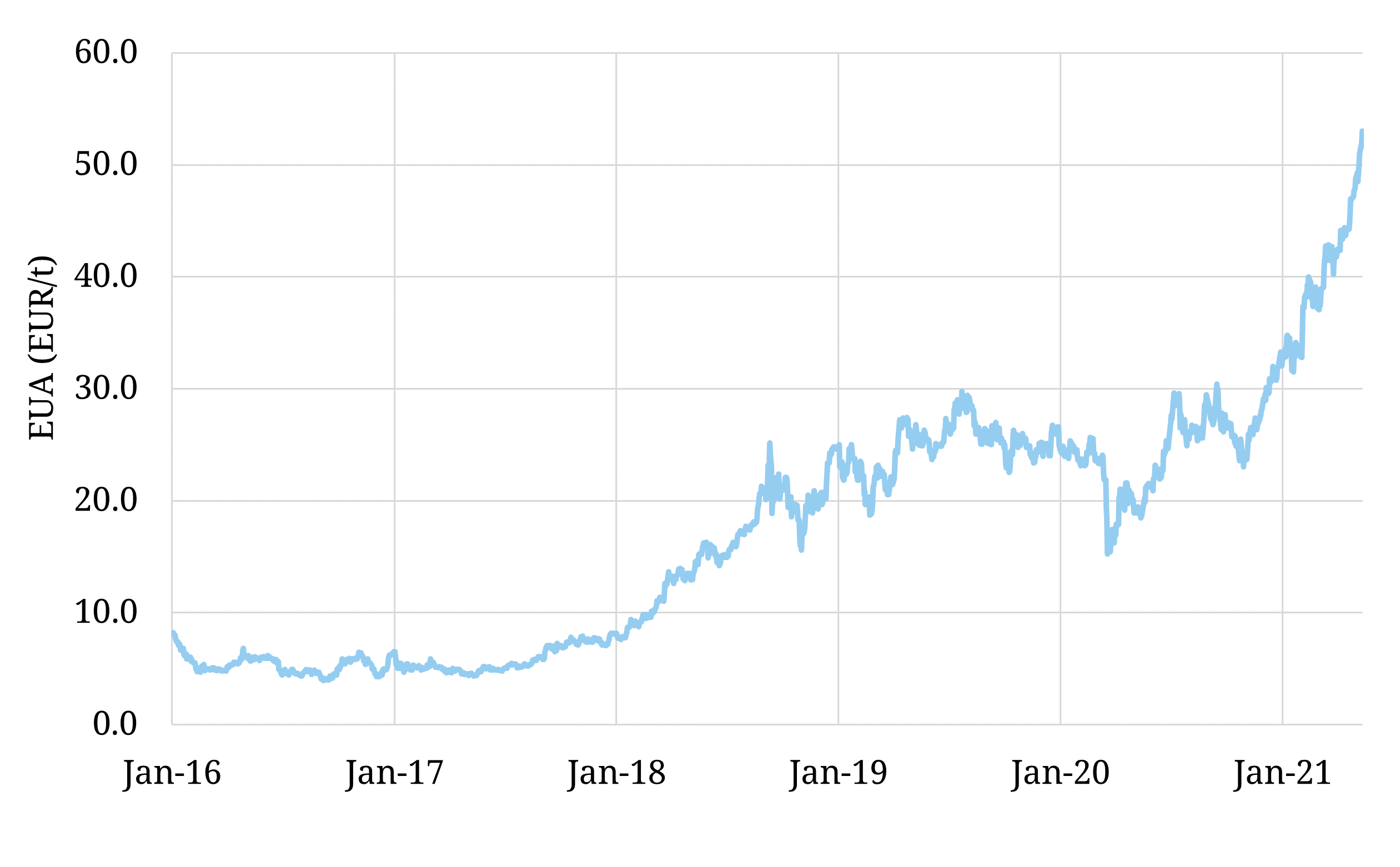 If we assume for simplicity that EUA price rises are passed through based on CCGT carbon intensity, every 1 EUR/t rise in EUAs:

In other words power prices rise to compensate marginal gas plants for higher carbon costs, but this falls well short of the variable cost impact on coal and lignite units.

These numbers illustrate the downward impact of the more than 30 €/t rally in carbon prices on forward CDS and CBS over the last 6 months.  Current forward CDS levels for lower efficiency (40%) and higher efficiency (45%) German coal plants are shown in Chart 2 (assuming 10 €/t of variable coal transport costs and 1 €/t variable plant costs).

Chart 2 shows coal plants on a forward price basis being pushed out of merit across the summer months and operating a peaking profile in shoulder months.  This varies by station depending on flexibility, coal transport costs etc.

Hard coal plants have fixed costs that range from 30-50 €/kW/yr. That is the equivalent of 4-7 €/MWh of generation margins assuming a baseload running profile just to cover fixed costs.

More flexible coal plants can create some additional value by profiling generation into peak periods. But many coal plants have flexibility constraints and high start costs which limit their ability to provide peaking flexibility. If carbon prices remain at these levels, the writing is on the wall for the German coal fleet.

Forward lignite plant generation margins (Clean Brown Spreads or CBS) are also being pushed well below fixed costs by rising carbon prices and turning negative across summer months. Lignite plant operators face a decision to either idle the plant, or decommission the plant & mine entirely, ahead of regulatory scheduled closure timelines.

These closure decisions are complicated by the impact of closure compensation and local political considerations e.g. around worker layoffs and unions.

There can be no doubt that carbon EUA prices are in a structural uptrend since Europe stepped up its ‘green new deal’ emissions response in 2020. But as the EUA price rise starts to take a parabolic shape approaching 60 €/t, it’s time to ask the question – is there a growing risk of a major price correction?

There are two factors that are set to provide some significant price resistance at these levels, neither of which is receiving much press:

Media attention appears more focused on lofty price targets (e.g. 100 €/t) put out by several hedge funds. EUAs may reach this level at some point this decade, but the red warning flag is hoisted when investment podcasts start touting carbon as the ‘trade of the century’ as has been the case this month. This suggests there is a good deal of near term speculative froth driving what is at its core an emissions compliance focused market, with a history of heavy handed steering by regulators.

EUA price correction or not, the probability of accelerated coal closures in Germany is rising rapidly. There is currently a popular narrative in Germany that runs along the lines of:

This narrative is consistent with decarbonisation of the power sector as required to meet Germany’s emissions targets. But it significantly oversimplifies the challenges the German power market faces across the next 5 – 10 years.

Put in simple terms, Germany needs to replace 8 GW of nuclear (closing by end of 2022), 15GW of coal and 14GW of lignite capacity (most of which will now likely close by the mid 2020s). The majority of these units have been running at relatively high load factors i.e. orders of magnitude more GW of wind & solar capacity is required to replace it, given lower average load factors (& even lower derating factors).

The renewables part of the narrative is being backed by action, with policy makers ramping up support for wind & solar investment to hit the revised 65% German 2030 renewable target.  But deployment takes time and it needs to be backed up by adequate flexibility.

It is the ‘storage & interconnectors’ bit of the narrative which appears to be the Achilles heel of Germany’s approach, for two reasons:

Although there are some sections of both industry and government that understand this challenge, Germany’s current policy framework appears to be flirting with major power market disorder across the next 2 – 3 years. By that we mean major network stress events, price spikes and a structural rise in price volatility.

What is needed in Germany is a much more constructive policy framework to support investment in flexible capacity. For example Germany is currently one of the less attractive markets in Europe from a battery investment perspective.

If we are right about market disorder, policy makers and system operators will likely intervene on a short term basis in response e.g. via reserve contracts, ancillary markets or asset reserve pools.  The existing stability reserve mechanism was called on multiple times across Q1 2021 to support the market.

However the enduring solution for Germany’s flexibility issue, like in most other European countries, is likely to be some form of capacity market.