CCS – Will it take off anytime soon?

Guest Post written by Howard Rogers, the Director of Natural Gas Research at the Oxford Institute for Energy Studies. Policy makers across Europe are

CCS – Will it take off anytime soon?

This week’s article is the next in a series of Guest Posts written by Howard Rogers, the Director of Natural Gas Research at the Oxford Institute for Energy Studies.

I published a paper in 2012 on the subject of CCS entitled (appropriately I thought) ‘Gas with CCS in the UK, Waiting for Godot?’.  This line of research was prompted by a desire to get to the bottom of why such a potentially significant weapon in the quest for CO2 abatement, despite gaining the approval of all key climate change policy bodies, has to date not one commercial scale power sector application in operation globally.

The most common explanation is that of ‘technology challenges’.  This is factually incorrect.  Not only have the individual building blocks of the CCS chain been successfully employed in the upstream, petrochemical and refining sectors for decades, but commercial scale CCS chains have been deployed in the fields of natural gas processing and fertiliser manufacturing.

Whilst technological progress would certainly improve efficiencies and lower costs – especially in the CO2 separation stage – there are no barriers to making the process work, at scale, with coal or gas – fired generation plant.  This is true whether we are considering pre-combustion (where the coal or gas stream is reacted with steam to form a mixture of CO2 and Hydrogen) or post-combustion (where coal or natural gas is used in a conventional generation plant and the CO2 extracted from the flue gas before it is vented in a stack).  Pre-combustion configurations tend to require more complex process plant and lack the operational flexibility of post-combustion alternatives.  This is likely to be important in the future where coal or gas fired generation with CCS could be required to provide flexible buffering or back-up to intermittent wind and solar generation.

The question of cost

Here I believe the issue is one of the commercial complexity of establishing a power generation with CCS ‘chain’.  In order to successfully construct a commercial scale power sector CCS scheme it is necessary to ensure that the commercial arrangements for the power generation and CO2 separation, CO2 transportation and CO2 storage stages are covered by a ‘web’ of commercial agreements which appropriately apportion risks and rewards along all stages of the CCS chain.  As current wholesale power market prices are set by unabated fossil fuel generation with currently only weak CO2 cost signals, it would be necessary that governments provide a level of assurance, not just on future power generation revenue, but more specifically on the difference between generation revenue and fuel costs. This is a level of complexity which has never yet been attempted in power markets which until recently have been run under an orthodox market framework. 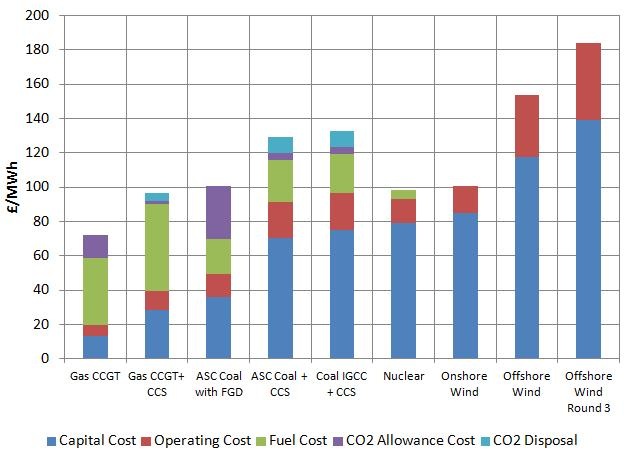 The attraction of CCS

The enduring dilemma is that however difficult it may be to construct a workable commercial and subsidy framework for CCS – it represents a potentially very significant source of low carbon generation.  Although the commercial arrangements for building offshore wind are more straightforward, ultimately gas with CCS may offer a more cost effective alternative to consumers.  Another factor in favour of CCS is the challenge of ensuring system stability as installed capacities of wind generation become significant.  Until a viable or affordable means of power storage is developed, wind power must be backed up by a controllable, flexible alternative means of generation.  This could be hydro, coal or gas fired generation, but if it is the latter two, this may make it difficult to meet longer term carbon targets.  Gas or coal with CCS could be an alternative to excessive levels of wind generation and a flexible complementary back up to wind if used in a post-combustion CCS configuration.

In conclusion, CCS is a technology which offers significant potential in helping society achieve decarbonisation of power generation.  While technological progress can reduce the cost and improve the efficiency of CCS, it does not represent a barrier to successful implementation.  The complexity of the commercial agreements and subsidy mechanisms require to support CSS investment in the context of a market-orientated power sector is the key challenge.  However, absent breakthroughs in affordable power storage technology or other large scale ‘controllable’ low carbon generation, gas and coal with CCS must at some point be embraced if carbon goals are to be achieved, due to the shortcomings of wind and solar.

Whether the UK government has the drive and commitment to ‘see it through’ this time around is debatable.  However if society remains committed to decarbonisation goals and breakthroughs elsewhere are not forthcoming, CCS is likely to remain an area whose undoubted technical viability and scalability will challenge those tasked with designing a framework to facilitate the necessary investment for at least the next few policy iterations.