Crude is not alone as it plunges into 2015

The plunging price of crude oil is the big story of the energy industry in 2015 so far. Looking back through history, similar oil price moves of this magnitude

Crude is not alone as it plunges into 2015

The plunging price of crude oil is the big story of the energy industry in 2015 so far.  The impact of this seismic shift in the pricing of hydrocarbons reaches well beyond the oil market. The fall in crude is in turn acting to drag down global gas prices, changing LNG flows and threatening the economics of large volumes of new production.  Shifts in the relative pricing of hydrocarbons are also set to shake up the competitive balance across gas, coal and renewable power generation assets.

Looking back through history, similar oil price moves of this magnitude suggest prices are unlikely to make a meaningful recovery anytime soon.  Weak crude is not just going to be January’s story.  It will likely be the defining energy market event of 2015.  So we are going to start the year with a series of three articles focused on crude pricing:

Then in series of subsequent articles across the first half of this year we will drill down into some of the more detailed implications of the structural shift in crude pricing for LNG, European gas and power markets.

Oil is in good company

As the decline in oil prices gained pace towards the end of 2014, the prices of other key industrial and energy commodities have also accelerated lower. This reflects a broader weakening in commodity demand tied to a softening global economic growth outlook.  Chart 1 plots the crude price decline against two other important commodities:

So while there is a specific oversupply story playing out in the crude market, the rapid decline in the prices of other commodities into 2015 suggests a broader weakening in global commodity demand. 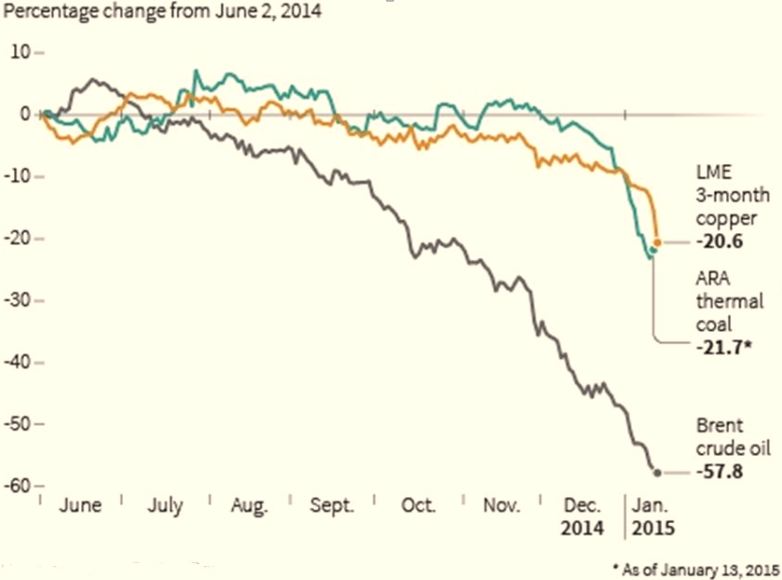 Is the global economy stagnating?

Looking beyond commodity markets for a minute, it is not hard to find evidence of increasing concerns around global economic weakness. Interest rate markets are a good place to start.  Long term (10 year) government bond yields have also fallen sharply across the last 6-12 months as illustrated in Chart 2, with bond yields of 4 major developed countries shown as follows: 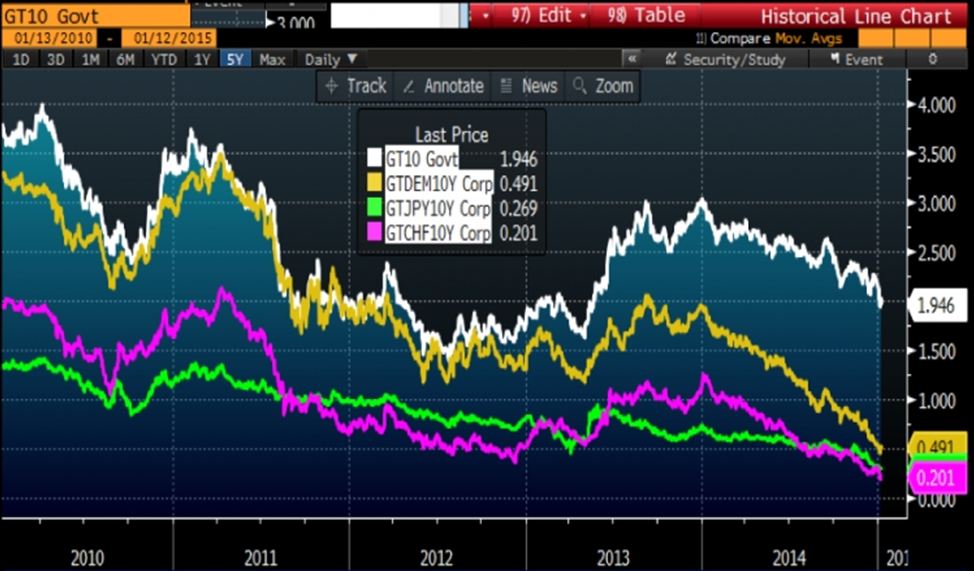 Yield curves across the world have been flattening (longer term yields falling relative to short ones), a dynamic typically associated with expectations of weakening economic conditions.  It is important to also take into account the effects of central bank bond purchases on bond yields (Quantitative Easing or QE).  But in a sense these bond purchase programs only reinforce the message of underlying economic weakness.

The pronounced decline in German yields across 2014 symptomises concerns about Europe joining Japan in a state of prolonged deflationary stagnation.  The European Central Bank is expected to respond this week by announcing aggressive new QE measures of its own.  But while the world’s major central banks have inflated share and property markets with QE, their success in fostering real economic growth in a debt laden global economy has been limited.

The US yield gap over Europe and Japan reflects a healthier US economy in relative terms but one whose fortunes are clearly linked to the rest of the world.  But importantly, higher US yields have driven a pronounced rally in the US dollar over the last year.  This has also contributed to global commodity price weakness given commodities are traded in USD terms.

The linkage back to energy markets

Why does all this matter for European gas and power markets?  There are the more obvious direct implications of weakening economic growth on demand for power and gas across Europe.  But there are a number of more indirect consequences of a structural shift lower in global commodity prices caused by weakening demand.  For example:

We will follow through on each of these themes in a number of subsequent articles across the first half of 2015.  But next week we continue our focus on crude with a more specific look at supply side drivers.