Asset owners and investors are not waiting for sweeping policy announcements before taking action.  The writing is on the wall.

Asset owners and investors are not waiting for sweeping policy announcements before taking action.  The writing is on the wall.

In early March 2020, as the rapid spread of Covid dominated the headlines, the EU passed a law establishing a net zero 2050 carbon emissions target.

The net zero target has major implications for European gas market evolution and the value of gas assets.  2050 may seem like a long time away, but the impacts of the target are rapidly taking shape.

A major EU ‘gas package’ of regulatory reforms has been under development for several years and was anticipated to be released in 2020. But the growing momentum behind decarbonisation has now seen this rebranded as a ‘decarbonisation package’ and delayed until 2021.

EU and individual country policies are now being strongly influenced by how the gas market will operate within the EU’s headline targets on decarbonisation.

This gas policy shift is being felt across the energy industry.  Asset owners and investors are not waiting for sweeping policy announcements before taking action.  The writing is on the wall.

The decarbonisation of European gas markets across the next 30 years presents enormous opportunities for growth and value creation.  It will also result in some existing assets being stranded and decommissioned. In today’s article, we set out a framework to help understand the impact of gas market decarbonisation and look at the key role of hydrogen.

That said, there are some reasonable assumptions we can make to frame this uncertainty. Diagram 1 shows a breakdown of current demand for natural gas (methane), split out by potential options for decarbonisation.

It is important to note that the diagram is illustrative and the boxes in the diagram are not to scale. In an article to follow soon we will show two fully worked scenarios for gas market evolution to 2050.

Diagram 1: How could current gas demand be decarbonised?

There are broadly 5 options to reach a net zero carbon footprint by 2050: 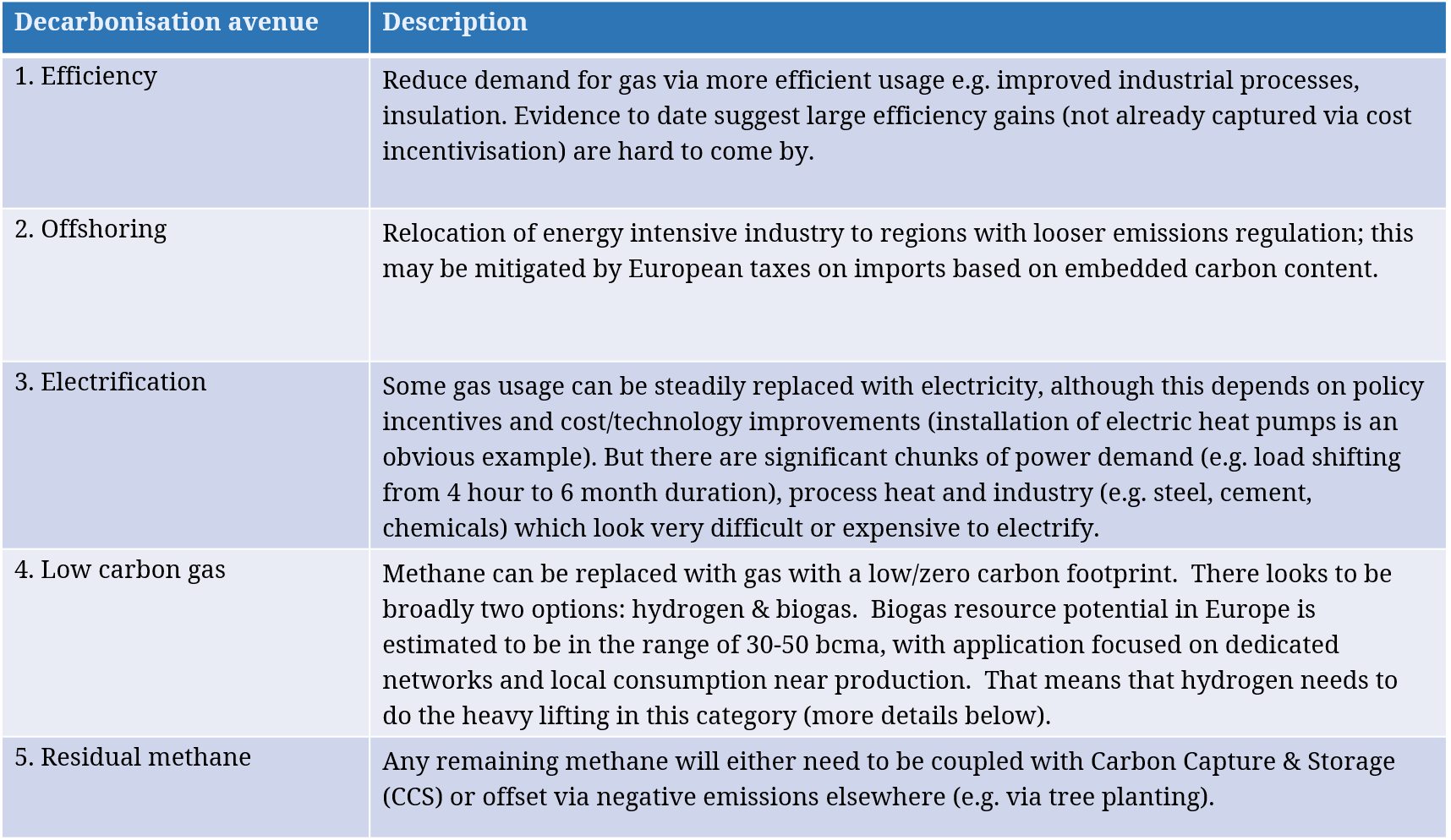 Hydrogen is the missing link

We have been engaged by several large energy companies across the last 12 months to analyse the impacts of European gas decarbonisation on individual asset & portfolio values.  We undertake this analysis using our European gas market model (which captures intermarket linkages via fully integrated LNG market + European power market model modules).  One key conclusion of our analysis is that the role of hydrogen will be pivotal in driving gas market evolution and asset values.

In the context of Diagram 1, ‘low carbon gas’ (predominantly hydrogen) is a key enabler of faster and more cost-effective decarbonisation.  This is primarily because of practical limitations around the volume potential and timing of each of the other 4 avenues.

Electrification is often pushed as the obvious solution.  ‘Electrify everything & decarbonise power’ is an attractively simple mantra, and is sensible as a broad principle.  But there are substantial volumes of current methane demand with no practical electrification solutions in sight (e.g. weekly/seasonal power load shifting and process heat).  And other volumes which will be very expensive to electrify (e.g. retrofitting heat pumps to replace existing gas boilers).

Gas decarbonisation has been framed as a title fight battle between ‘Electrification vs Hydrogen’.  The renewables industry is the number one fan of Electrification, whereas the gas industry is promoting Hydrogen as the champion.

If fast and cost-effective decarbonisation is the goal, our analysis suggests this ‘Electrification vs Hydrogen’ framing is the wrong approach.  Both electrification and hydrogen are needed in scale to achieve the 2050 target.

The key question is not ‘if’ hydrogen will play a key role, but:

If there is one lesson to date from decarbonising the power sector, it is that policy makers should not attempt to pick winners. Power policy experimentation points to success being underpinned by a clear set of policy support guidelines that allows (i) competition between technologies (where it is realistic) and (ii) investment de-risking to drive down the cost of capital. The UK FiT/CfD scheme is an example (albeit far from perfect).

There are however already pronounced biases creeping into the push for a hydrogen solution. There is a strong policy and renewables industry push to champion green hydrogen produced via electrolysis from wind & solar.  This is likely to be the most effective solution in the long term, but is currently very expensive as shown in Chart 1, which compares the costs of electrolysis with the most established alternative (Steam Methane Reform + CCUS). 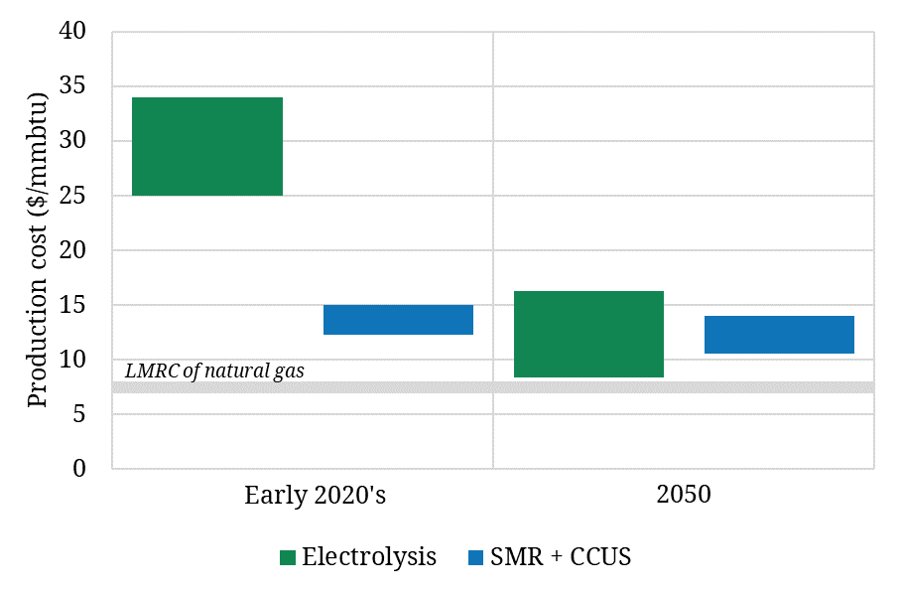 Costs are not the only reason why electrolysis is unlikely to be ‘the silver bullet’. Decarbonisation of power already presents a huge challenge in terms of deployment of wind and solar capacity and the associated requirements for flexibility and transmission upgrades. Electrolysis compounds that challenge.

Over at least the next 10-20 years, there is a strong numerical argument for focusing all renewables investment on displacing lignite, coal and then gas fired power plants.  The carbon reduction from direct displacement of fossil fuel generation is currently up to 5 times more efficient in reducing carbon emissions than using renewables to produce hydrogen to replace gas.

Current scepticism of carbon capture & storage to support SMR is born from a lack of any measurable progress on CCS in the power sector.  But this misrepresents the challenge of coupling CCS with methane reforming.  Failure of CCS in the power sector has been driven by the inability to cost-effectively ‘capture’ carbon emissions (either pre or post combustion).  But capturing carbon as a by-product of the SMR production process is much easier. And the ‘storage’ part of CCS has been repeatedly proven and involves conventional technology and existing reservoirs.

The other key advantage of methane reforming is that it relies on existing gas transmission infrastructure, as opposed to transitioning energy to already challenged electricity networks.  High pressure gas pipeline networks can be used to deliver feedstock gas for hydrogen production close to demand centres.

Impact of decarbonisation on the gas market

Our analysis of decarbonisation of the gas market suggests two ‘pathways’ for market evolution that we think are important to analyse. These can be characterised as:

It is important to note that these pathways are not framed around ‘Electrification vs Hydrogen’.  Hydrogen plays a key role in both pathways, but in the second pathway its evolution is focused on production via electrolysis.

Within these two broad pathways, a number of more specific scenarios can & should be constructed. We retain our healthy respect for uncertainty, particularly against a backdrop of rapid policy & technology driven evolution of markets.

But our analysis shows that the most effective decarbonisation is likely to come from policy makers setting up a level playing field and letting companies innovate.  It can sometimes be a winding path, but common sense usually prevails.

We will return in our next article to set out modelling analysis of how the European gas market may evolve under these two pathways.

We set out analysis that shows a rapidly increasing European capacity deficit and a major requirement for investment in 4 different types of flexibility.
Read more
Featured Article
16 Jan 2020

Momentum behind the role of hydrogen in decarbonising the European gas market is gathering pace. We look at how hydrogen may impact the gas supply chain.
Read more