The headline targets from the Hydrogen Strategy demonstrate a serious intent to scale hydrogen investment and to do it fast.

We set out analysis of two scenarios that explore how the EU’s new hydrogen strategy may drive decarbonisation of the European gas market.

The headline targets from the Hydrogen Strategy demonstrate a serious intent to scale hydrogen investment and to do it fast.

Renewable electricity is anchoring Europe’s push to decarbonise, but it is not enough. There is a growing recognition across policy makers and companies that a new front needs to be established in the form of hydrogen.

Industry and investment interest in hydrogen has surged in 2020. Over the last two weeks, the EU has boosted hydrogen momentum with the launch of three key policy initiatives:

The Hydrogen Strategy establishes initial targets & a roadmap for hydrogen deployment, flagging up to €470bn of investment required by 2050. The ECHA is a governmental/industry body tasked with driving the deployment of low-carbon hydrogen, with leadership including CEOs of Shell, Siemens, EDF & Vattenfall. The Innovation Fund is targeting €1 bn a year of investment in emerging clean tech projects, with a clear hydrogen angle.

Policy support for hydrogen is being accelerated by the European fiscal stimulus response to Covid.  The three announcements above form part of both the EU ‘Recovery Package’ and the ‘European Green Deal’ policies.

There are many policy details still to be refined before the full implementation of hydrogen support mechanisms. But the headline targets from the Hydrogen Strategy demonstrate a serious intent to scale hydrogen investment and to do it fast.

The EU is targeting at least 6GW of hydrogen electrolysers by 2024. This target increases to at least 40GW by 2030, with the potential for a second 40GW from outside EU borders.  The EU’s initial policy announcement is focused on green hydrogen (via electrolysis), but it also implies broader support for blue hydrogen (via SMR or pyrolysis) to support transition.

In today’s article we analyse two potential scenarios for the evolution of hydrogen in Europe and its impact in decarbonising the gas market. This is our second article in a series on decarbonisation of European gas, with our first article setting out a framework for decarbonisation and the role of hydrogen.

The hydrogen question is no longer ‘if’ but ‘how much’

In our previous article we set out how the decarbonisation of gas has been framed as a battle between ‘Electrification vs Hydrogen’. Our view is that this is ‘either / or‘ framing is the wrong lens, a view that has been reinforced by the policy announcements this month.

Hydrogen is set to play a key role in decarbonising Europe in combination with electrification.  The important questions for hydrogen are now ‘how’, ‘how much’ and ‘where’ will it be produced.

We have developed two 2050 scenarios for decarbonisation of the European gas market which we set out today. Each of these is consistent with the EU’s net zero carbon target over that horizon.  We have also refined these scenarios to reflect the latest Hydrogen Strategy policy targets described above.

The scenarios are constructed to reflect the inherent uncertainty in decarbonisation pathways and to explore differences in the key hydrogen questions above (i.e. ‘how’, ‘how much’ and ‘where’).  A summary of the two scenarios is provided in Table 1. 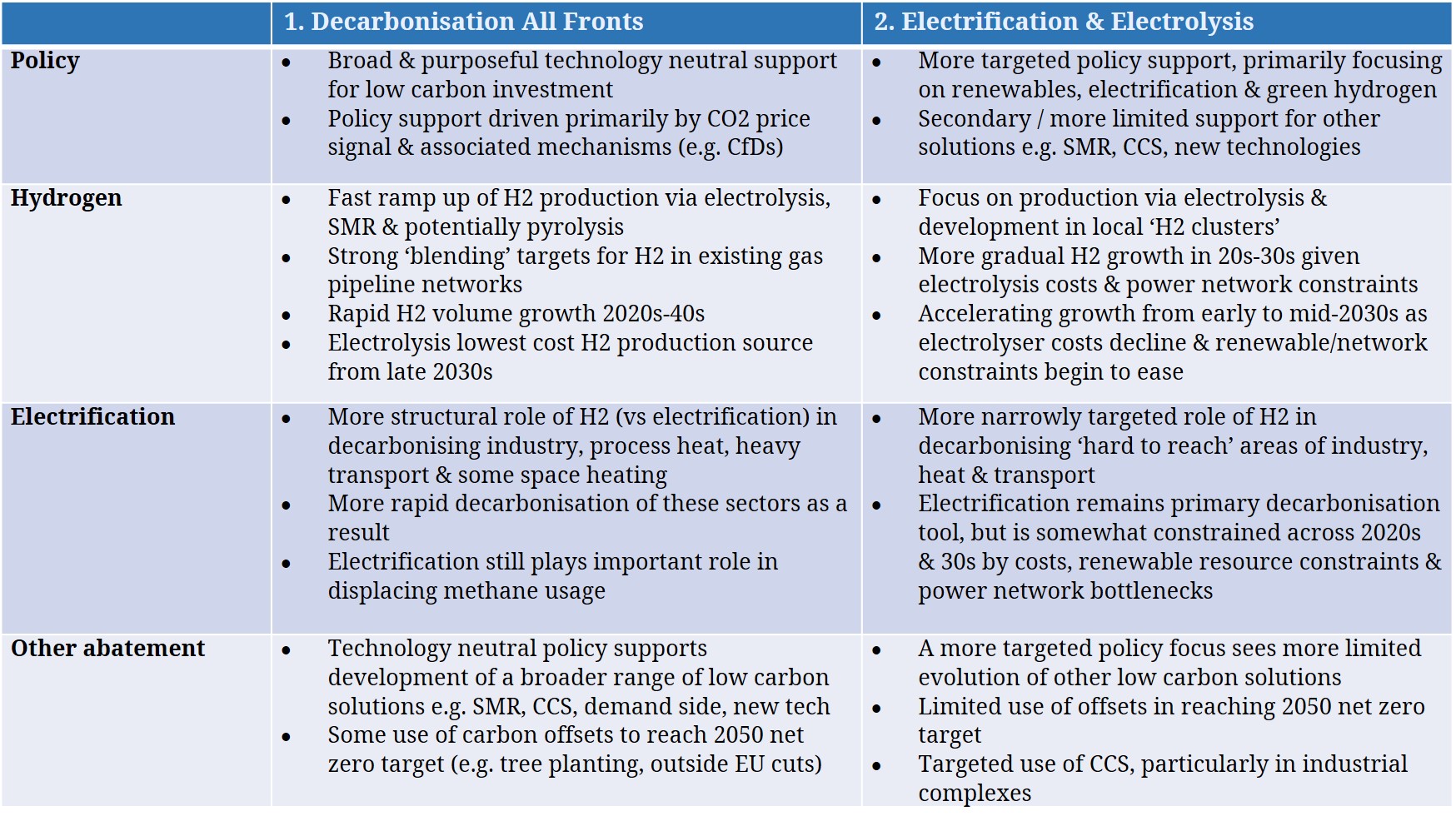 Practicalities of one scenario vs the other

The recently announced German and EU hydrogen strategies suggest a strong policy favour for renewables, electrification & electrolysis (consistent with our 2nd scenario). This reflects a political backdrop of widespread popular support for these routes.  But it also represents an inherent technology bias towards a solution driven primarily by renewable electricity generation.

An alternative approach is to support a strong carbon price signal as a technology neutral investment driver over a broader range of technology solutions.  These could include blue hydrogen, CCS, next generation bio-fuels, greater demand side engagement and perhaps most importantly, innovation & new technology (consistent with our 1st scenario). The mandates for the Innovation Fund & ECHA look more consistent with this approach.

In our view, this broader approach should result in quicker, cheaper and lower risk decarbonisation. This view is not based on a prediction as to the success of any specific solutions over electrification & electrolysis. Quite the opposite, it reflects the uncertainty involved.

Casting a broader net, increases the decarbonisation opportunity set and reduces the risks of backing particular technology paths.  We are hearing that behind the scenes, EU policy makers are more sympathetic to an ‘All Fronts’ approach than the Hydrogen Strategy policy headlines suggest.

Impact of these 2 scenarios on the European gas market

Enough politics, let’s look at some numbers. The charts below show the evolution of the European gas market supply & demand balance under the two different scenarios described above. 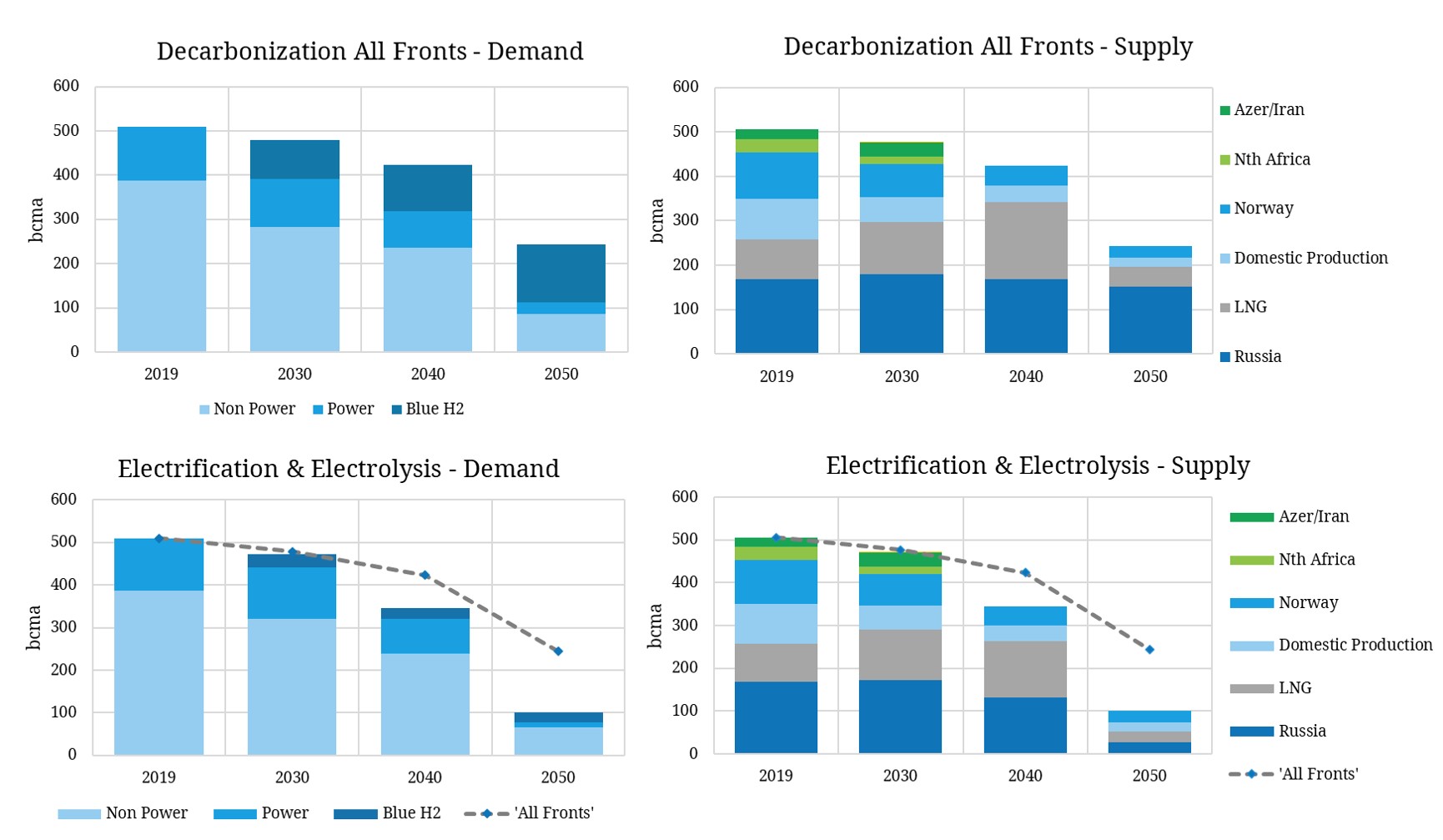 There are a lot of moving parts in the analysis that lies behind these summary charts, but let’s focus on some key conclusions by time horizon.

Despite a ramp up in policy measures to support hydrogen and broader decarbonisation, there are two reasons why European gas demand is unlikely to substantially decline by 2030.

Firstly, the pace of regulatory scheduled closures of coal & nuclear plants across Europe is set to outpace renewables growth. That leaves gas-fired power plants to fill the output gap, supporting power sector gas demand.  Both our scenarios assume the latest renewables growth targets are met. If you want more analysis on the power sector to back this up, see our briefing pack here.

Secondly, the technology & policy mechanisms required to displace gas demand in the industrial and residential sectors are not in place. Efficiency measures and a steady transition to heat pumps have a gradual impact on residential gas demand. But progress in decarbonising industrial demand across this horizon is difficult given technology & cost barriers. This is despite the new targets in the Hydrogen Strategy (which although aggressive, account for relative low volumes of gas displacement).

The 2020s in both scenarios is focused on the policy, investment & technology groundwork required for hydrogen to scale in subsequent decades.

The impact of both electrification and hydrogen starts to really take effect in the 2030s. The two scenarios also diverge significantly, more than suggested by the 2040 bars in the supply & demand charts.

2040 gas demand is higher in the ‘Decarbonisation All Fronts’ scenario, despite a significantly higher penetration of hydrogen and lower overall gas market carbon footprint. This is primarily driven by the parallel deployment of blue hydrogen, supported by the flow of gas through existing pipeline networks.

By 2050 there is a stark difference between the role of the European gas market across the two scenarios, despite both of them achieving the EUs net zero carbon target.

In the Electrification & Electrolysis scenario, the gas market is less than a quarter of its current size by 2050 and declining fast. Residual gas demand comes from some blue hydrogen capacity (developed in the 2020s & 30s), small volumes of industrial CCS and limited use of offsets for very hard to reach industrial use of gas.  Europe still receives some LNG & Russian gas to supplement the small volumes of residual domestic production.  But there is widespread repurposing, decommissioning & stranding of existing gas infrastructure.

The 2050 decline in gas demand in the ‘Decarbonisation All Fronts’ scenario is cushioned by higher volumes of blue hydrogen production capacity developed across the 2020s & 30s and the use of CCS & offsets to cover some industrial areas.  Russia dominates control of the marginal molecule of methane supply into Europe, although with Europe still experiencing ebbs and flows of ‘price taking’ gas from the LNG market.

How do we model these scenarios & what about a hydrogen market?

In order to digest the numbers in the scenarios we present above, it is useful to have some context on where they come from.

The two scenarios have been developed in the Timera Integrated Gas (TIG) modelling framework.  TIG is a detailed country level supply & demand model of the European gas market, including the evolving impact of hydrogen supply & demand. But it also has two integrated modules that allow detailed analysis of two key market linkages:

This is our last article before a break for the summer. But we leave you with a question to ponder. Under both the scenarios we show above, there are substantial flows of hydrogen across Europe, serviced by dedicated networks. At what point does this develop into a hydrogen market and what shape may that take?

We’ll come back with some of our views later in the year.  But as a taster, we think local hydrogen markets developed around production & demand clusters may evolve much quicker than people think. The development from this into a hydrogen based hub market network, as envisaged by the Hydrogen Strategy, is a much bigger step.  But our analysis shows that many of the ingredients for a liquid European hydrogen market are likely to fall into place over the next 15-20 years.

Enjoy the summer and see you back in mid August!

Momentum behind the role of hydrogen in decarbonising the European gas market is gathering pace. We look at how hydrogen may impact the gas supply chain.
Read more
Featured Article
27 May 2019