Asia dominates global LNG demand. The US and Australia are challenging the Middle East for domination of global LNG supply. But it is Europe that has become the LNG market ‘swing provider’.

Chart 1 shows a view of the evolution of European LNG imports this decade. This illustrates Europe’s role as swing provider under different prevailing market conditions: 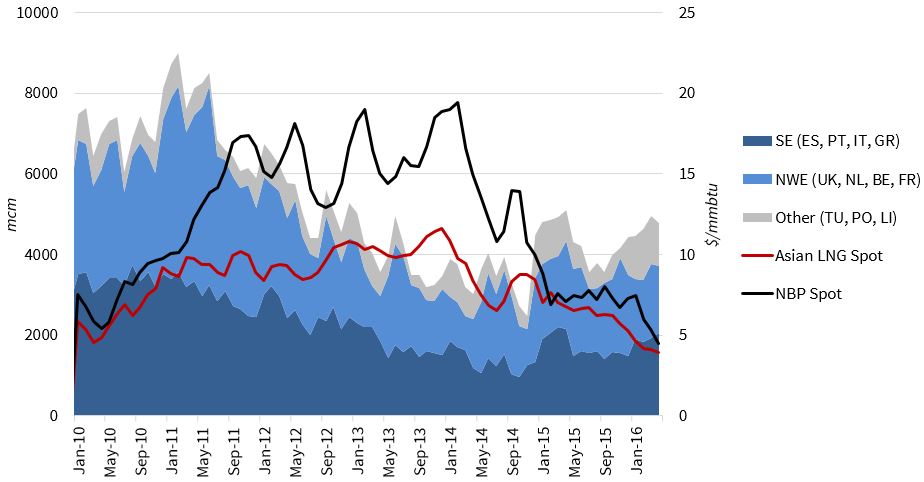 In today’s article we explore 5 drivers of Europe’s role as a provider of global supply flexibility:

Unlike Asia, European gas demand is directly responsive to changes in market prices. The mechanism driving this demand elasticity is switching of CCGTs for coal plants in the power sector, driven by spot fuel prices. As gas prices fall the competitiveness and hence load factors of CCGT plants increases (and vice versa). This key demand side flexibility mechanism allows Europe to efficiently absorb LNG in periods of surplus and divert LNG supply in periods of tightness, e.g. the 20 bcma of additional gas absorbed by the European power sector in 2016.

The European gas market also exhibits supply elasticity. Flexibility is supported by swing volumes above take or pay levels on long term pipeline contracts (particularly for Russian gas). In addition Norway has significant upstream production flexibility that is profiled on a seasonal basis, with daily flows managed by Statoil against spot price signals. In contrast to Asia, Europe also has substantial volumes of underground gas storage capacity that is also optimised against hub prices. These supply flexibility mechanisms combine to facilitate substantial ebbs and flows of European LNG import volumes.

The price responsiveness of European gas supply and demand is underpinned by trading hub liquidity. This provides robust spot price signals against which LNG cargoes can be monetised. Hubs also support the forward hedging of LNG exposures facilitating portfolio and supply chain management. This is why the North West European hubs (NBP and TTF) currently form the key global benchmark against which LNG cargoes, contracts and tenders are priced.

European flexibility to absorb large swings in LNG volumes is also a function of adequate import infrastructure. European regas capacity is rarely constrained, although this situation may change with LNG’s growing role in the supply mix. Access to regas capacity connected to liquid hubs via UK, Dutch, Belgian and French terminals is particularly important in servicing shorter term flexibility requirements. But there is further headroom beyond this given the key security of supply role played by regas infrastructure, for example on the Iberian Peninsula.

Last but not least is the impact of the portfolio construction of European gas companies. There are a number of large European gas players whose portfolios span both the global LNG and European gas market supply chains, e.g. Shell, BP, ENI, Total, Engie, Statoil, Uniper and RWE. The internal optimisation of gas within these portfolios provides a substantial additional source of supply flexibility. The exercise of this internal portfolio flexibility, such as the re-routing of flows and swapping of cargoes, is highly responsive to spot price signals even though it often does not involve direct transactions visible in the market.

European LNG imports are set to grow significantly into next decade as domestic production declines. But there is inherent price responsive flexibility in the European gas market to service large swings in import volumes. As LNG imports grow, so too will Europe’s ability to export LNG supply flexibility to the global market. This will underpin the role of European hub prices as the reference for Asian spot LNG prices in a world where growing, flexible LNG flows intensify inter-regional arbitrage opportunities.