This week we shift our focus to European gas demand. We aim to set out why European demand growth will be even more important than Asian LNG demand in driving

This week we shift our focus to European gas demand. We aim to set out why European demand growth will be even more important than Asian LNG demand in driving the evolution of both European hub prices and spot LNG prices over the remainder of this decade.

Putting this 5 year reduction in European demand in the context of the LNG market, 109 bcm represents more than 40% of total current annual Asian LNG demand. Approximately half of the fall in demand over the last 5 years occurred in 2014 alone (52 bcm), the result of exceptionally warm weather, e.g. Germany’s weather was the warmest in recorded history.

From these high level numbers, it is clear that the evolution of European gas demand over the remainder of this decade is a going to be a key driver of the global gas market balance. We will come back to look at the drivers of European gas demand in more detail in a separate article. But it is worth noting a few of the factors behind the decline:

Of these 3 factors, the power sector (1.) has been by far the largest contributor to the overall reduction in gas demand (once weather influences are accounted for). The fall in demand has been induced both by gas vs coal plant switching (given relatively weak coal prices) and by an increase in renewable output across Europe.

Looking forward, it is important to note the impact of extreme weather in 2014. Industry forecasters have been consistently overly optimistic in predicting a recovery in European gas demand. But it is reasonable to expect a significant demand recovery in 2015 regardless, given normalisation of the weather effects of 2014. This may also be supported by somewhat higher gas plant load factors as the result of weaker gas hub prices.

In order to explore the impact of weaker European demand on hub prices, we use the same scenario framework we set out last week. We have defined what we see as a reasonable weaker gas demand growth scenario over the next 5 years as follows:

We combine this European demand scenario with an assumption that Asian LNG demand growth continues at a reasonably robust rate (18% CAGR), again as we assumed in the original LNG market scenario we set out in April. 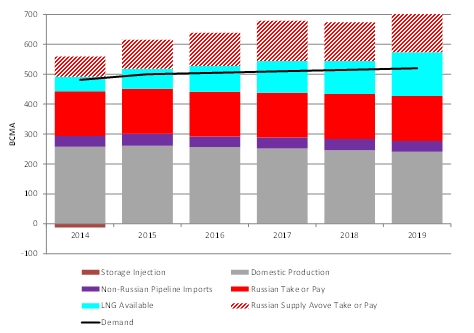 It is useful to contrast this chart with the one we showed last week. In the weak Chinese LNG demand growth scenario from last week, Europe only really started to struggle to absorb surplus flexible LNG from 2019.

The tipping point (where pipeline contract flex is exhausted), is reached much earlier in a weak European gas demand scenario. This comes down to the scale of European gas demand relative to Asian LNG imports. Asian demand growth is impressive, but it is coming off a much lower base.

The point of the scenario analysis above is not try and forecast a weak demand outcome. Instead we are trying to illustrate that weak demand adds to the challenges Europe is already facing in absorbing growing surplus global volumes of LNG over the remainder of this decade.

Over the last two weeks we have looked at the impact of (i) weaker Asian LNG demand and (ii) weaker European demand on the European gas market balance. Of these two, European demand is the bigger driver. But a combination of the two in parallel would cause a larger and more rapid development of surplus gas at European hubs. The risk of this happening and the resulting impact on hub price dynamics means we are keeping a close eye on the tipping point framework we set out recently as new liquefaction capacity comes to market.