Evolving roles and risks in the European gas market

As the European gas market has developed around traded hubs, the business models of industry players have evolved. In this article we examine the drivers of Eu

Evolving roles and risks in the European gas market

Much industry analysis and discussion has been directed at European gas price formation, specifically the transition from oil indexation to hub pricing. But there has been less focus on the changing roles and risks of the key players. In this article we examine the drivers of European hub prices and attendant uncertainties and also the risks of key players compared to the pre-liberalisation era.

With hub prices eclipsing those of oil (product) indexation as the key wholesale reference price it is natural to ask the question ‘What are the determinants of European hub pricing?’ We have addressed this question previously in articles that set out and then applied a framework for the analysis of hub price behaviour. Two important conclusions from this framework approach are:

Historical analysis shows the framework approach to have worked reasonably well to the beginning of 2014, as shown in Figure 1. For 2012 and 2013, the annual average NBP price was $9.36 and $10.63/mmbtu respectively. 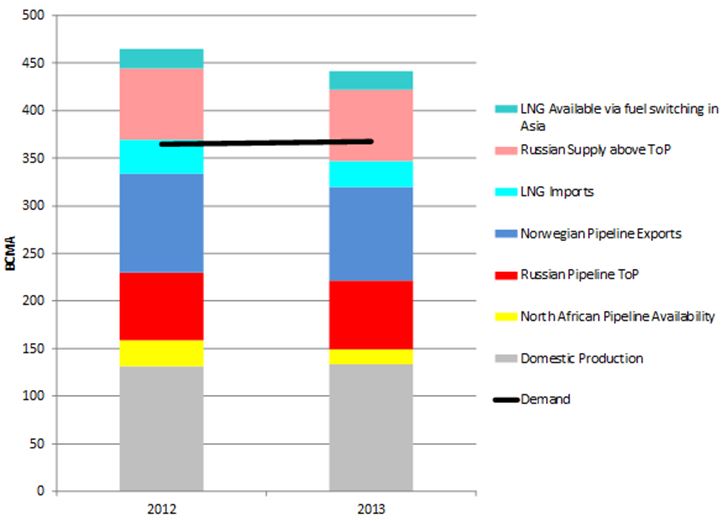 Two areas that are more challenging with the framework approach from a practical viewpoint are:

In early 2014, continuing to the present time, hub prices have fallen and remained below estimates of Russian contract price based on historic relationships to lagged oil product pricing. In mid 2014, NBP fell to levels where it demonstrably displaced coal in the UK power market. The forward curve for NBP and TTF appears to broadly re-converge with the consensus view of Russian contract prices in the 2nd half of 2015. But if substantial volumes of LNG keep flowing into European hubs, realised spot prices may again fall below contract price levels (a risk which we explored last week). We will return to the price exposure risks for midstream companies presently.

At the birth of the continental European gas industry the challenges in introducing natural gas as a new fuel were essentially to establish:

With the continuing strong growth in European gas demand up to the mid to late 2000s, this model proved highly successful for upstream and midstream participants. Demand growth effectively passed on the residual price risk to end consumers (power generators and industrials), who until relatively late in the day were unaware of this.

In the 2000s however, the First and Second Gas Directives, the Energy Sector Enquiry and the subsequent Third Package and Gas Target Model resulted in radical changes to the status quo. Network unbundling, entry/exit tariffs for transportation and the end goal of delivery of gas to hubs represented significant changes to the regulatory landscape. At the same time and partly in response to such changes, a wave of mergers created pan-European players. Significantly these were primarily power and gas utilities, dominated by power generation and management teams with more of a ‘trading mentality’.

In this new landscape the following changes can be observed in the roles of the key players in the gas supply chain:

The market landscape evolution described above has served to migrate risks into what were formerly Mid-Stream Gas Companies. The challenge they face is to continue to generate a margin on sales volumes given:

Exposures can be mitigated (but not always eliminated) by trading portfolio optimisation for the liquid portion of the forward curve. But the midstream players effectively need to pay a ‘hub minus’ price to the producers on the basis that they supply an aggregation function which has inherent value. At present it is not clear:

Looking to the future, there are three scenarios that can be envisaged:

Scenario 1: The ‘hub-minus model’ is successful and accepted by producers. Midstream players continue with a smaller but profitable merchant business and with some difficulty are able to continue with their long term contracts to expiry.

Scenario 2: The ‘hub-minus model’ is not accepted by producers. Midstream players are unable to establish a profitable business and cannot continue to the end of their long term contracts. Intense competition results in a consolidation, with companies leaving the sector leaving 6 or fewer serious players (‘the British model’).

Scenario 3: The existential threat to midstream gas players raises governmental concerns in some countries where the collapse of long term supply and transmission contracts is viewed as unacceptable. Financial support in some form is made available to enable existing contracts to be managed until expiry.

The current level of hub prices in Europe (around $7/mmbtu) may help midstream companies in terms of demand stimulation and meeting take or pay (or send or pay) commitments. However some of the problems described above primarily relate to the spread between oil indexed contract prices and hub prices. Although such spreads may reduce in the second half of 2015 it is difficult to predict whether this will be reflected in the spot market at that time or whether such a convergence will endure. The inability of players to hedge exposures beyond the liquid portion of the forward curve will unfortunately ensure that such problems are likely to recur throughout the remaining life of these contracts.

This article was drafted by Howard Rogers and is based on the findings and conclusions of the following paper: