The UK power market faces another round of design revisions as the government hits the panic button on security of supply. But these changes may lead to some u

What do you do if you design a capacity market that doesn’t work? Try, try again. The imminent threat of large volumes of coal plant closures has sent DECC rushing back to the drawing board.

This month a raft of proposed revisions to the UK capacity market have been announced for consultation. It is DECCs intention to implement these changes by the summer, in time for the start of the 2016 capacity auction process.

DECC is now fighting a security of supply battle on two fronts:

This was reflected in the UK energy secretary’s accompanying statements:

“We’re also sending a clear signal to investors that will encourage the secure and clean energy sources we need to come forward, such as gas and interconnectors”

The first statement would have made more sense three years ago when DECC first implemented the capacity market. The second statement reflects DECC’s barely disguised preference for CCGTs and interconnectors as a new build solution.

DECC’s proposed revisions to the Capacity Market reflect its security of supply concerns. These are focused around two main measures:

In this article we look at what these measures mean for the UK power market.

This measure will in effect replace the much criticised Supplemental Balancing Reserve (SBR) mechanism that is currently being used to maintain UK security of supply. The removal of SBR is long overdue given it has become increasingly unpopular and unruly over the last two years.

Plant closure announcements have forced National Grid (the TSO) to buy more and more ‘emergency reserve’ capacity to protect security of supply. Table 1 provides a summary of the 3.5 GW of SBR capacity Grid have purchased for Winter 2016-17. 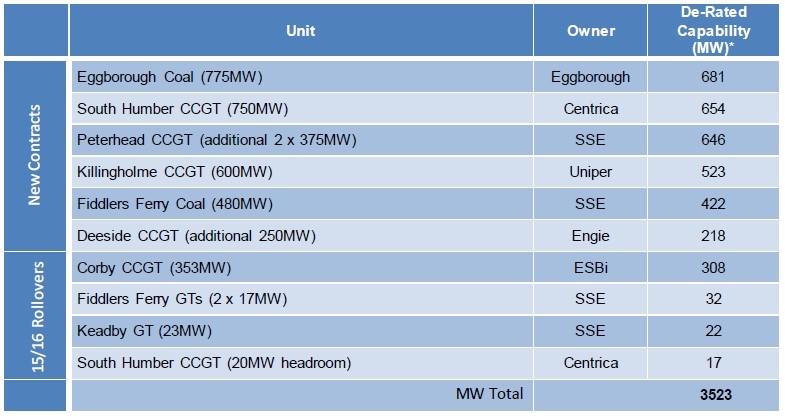 This table reads like a power plant endangered species list. The SBR capacity was procured for a total cost of £122m at an average price of 34 £/kW, 70% higher than capacity clearing prices in the first two T-4 auctions. Individual units were paid up to 88 £/kW for capacity.

SBR payments of this magnitude represent a glowing incentive for existing plants (particularly less efficient coal), to make closure announcements and bid for lucrative SBR contracts. This dynamic has forced DECCs hand in replacing SBR with something more consistent with the official capacity market.

While the removal of SBR is a positive step, the 2017-18 early implementation measures smell of panic. Running a capacity auction for one year agreements at such short notice will likely achieve DECC’s aim of driving up the capacity price. But it will do so at a substantial cost to the consumer.

The supply curve in the 2017-18 auction will be much steeper than normal given a reduced range of capacity options to meet the target. Existing coal plants are likely to be an important driver of clearing price. Coal plants will need capacity payments to cover station fixed costs (~40-50 £/kW), less any dark spread margins and delayed closure cost benefits, in order to remain open for the next two winters.

Say for example the 2017-18 auction clears at 35 £/kW with the government procuring 50GW of capacity (these are illustrative round numbers). This would cost the consumer £1.75bn. This is more than 14 times Grid’s cost of procuring SBR capacity for Winter 2016-17 (£122m). In other words the auction represents a huge windfall to existing plants that are going to remain open anyway.

Beyond this 2017-18 ‘one off’ auction, DECC will need to purchase incremental capacity in the T-1 auctions to ensure security of supply (given the absence of SBR). The supply curve for these auctions is likely to be steep and clearing prices higher for similar reasons to those described above i.e. limited competition to provide incremental capacity at short notice. Structurally higher T-1 capacity returns over the next 5 years is something to start factoring in to asset investment decisions. But these higher prices will only accrue to plants that do not already have contracts from the T-4 auction.

Leaving to one side the problem of security of supply over the next 5 winters, DECC is also rightly focusing on next decade. To give credit where it is due DECC appears to be taking a more sensible approach to the new build issue. Suggestions of introducing an entirely new set of interventions to support CCGT new build appear to have been shelved.

Instead DECC is focusing on using the existing Capacity Market but raising the capacity target level. DECC has provided guidance that 2021-22 target demand levels will be at least 3GW higher than would normally be the case. DECC’s intention in doing this is primarily to incentivise gas plant new build. But it will not necessarily result in new CCGTs being delivered.

We estimate a new CCGT project to require a minimum of 40-45 £/kW (via a 15 year contract) to proceed, given current available terms on tolling contracts and financing. The new penalties for non-delivery of capacity that DECC intends to introduce if anything act to increase the required capacity price.

Whether the clearing price in this year’s T-4 auction reaches these levels will depend on the steepness of the supply curve. But we suspect that capacity price levels between 20 and 40 £/kW will start to flush out large volumes of alternatives to CCGT capacity.

DECC will likely ensure that the use of higher emissions diesel generators is restricted via appropriate emissions legislation. It would be a mistake to do this via heavy handed fiddling with embedded generation benefits. But we suspect gas-fired peakers and an interesting range of other alternative supply sources may become apparent as capacity prices rise.

This is after all what the capacity market should be about. Competition to provide the cheapest form of incremental capacity, not a blunt instrument with which policy makers try and pick winners.