We look at the resurgence of French nuclear outages & their impact on power prices, generation margins & the system balance across European power markets.

French nuclear output is currently at only about 75% of normal levels, with knock-on effects across Europe. The impact of this generation shortfall is being reinforced by very low hydro reservoir levels in Italy & Spain and below average levels in the Nordics.

Very high gas prices are dominating headlines, but these are not the only challenges currently facing European power markets.

A summary of French nuclear issues

The substantial drop in output is the result of: 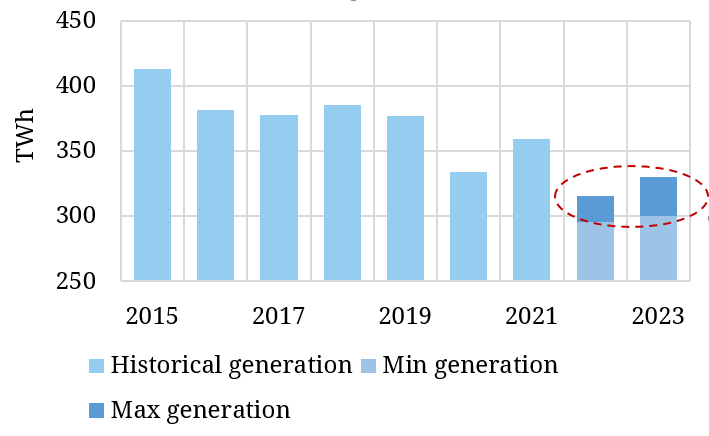 European power prices have been extremely volatile across the last 3 months. While wild gyrations in gas prices have been the primary driver, French nuclear output concerns (& low hydro levels) have played an increasingly important role in 2022.

The simplest way to strip out the influence of gas prices is to look at gas plant generation margins or Clean Spark Spreads (CSS). These show the forward margins that CCGT plants can lock in above the cost of gas & carbon.  Chart 2 shows the evolution of forward market peak CSS levels for Summer 2022 and Calendar 2023.

Clean spark spreads across Western European markets typically track each other in a fairly tight range, given high volumes of interconnection and market coupling.  The UK has been the exception, with a premium to Continental European markets reflecting the UK carbon price floor.

The close relationship between CSS began to break down from November last year as gas prices surged and concerns over French nuclear output began to increase.  A sharp divergence in Summer 2022 French CSS can be seen in Dec 2021 when EDF announced issues with a number of reactors (left hand panel of Chart 2).

Across the last 3 months these output issues have bled into Cal 2023 French forward prices as EDF has announced further downward revisions (right hand panel).  The impact on 2023 CSS accelerated in Feb 2022 as EDF revised down its 2023 output forecasts, with PK CSS surging from €75/MWh in early Feb to over €125/MWh after the announcement.

Knock on impacts across Europe

Chart 2 illustrates the strong divergence in forward French power prices from neighbouring countries as a result of nuclear outage issues. This reflects interconnector constraints which require more expensive peaking generation to be run within the French power market.

The chart also illustrates the divergence of forward prices across a number of key European markets as the system balance across Western Europe tightens. The nuclear generation deficit effectively reduces French net exports to its neighbours e.g. Germany, UK, Belgium and Italy.  This is acting to pull more expensive peaking generation plant onto the margin in these countries also, driving up power prices & CSS accordingly.

There is currently a strong industry and media focus on the impact of the Russian conflict on gas & power prices. This is somewhat overshadowing an uncomfortable secondary challenge: interconnected European power markets are facing a shortage of both energy & flexibility.

We look at the impact of French nuclear outages this winter & beyond as well as forward pricing dynamics signalling a requirement for more flexibility.
Read more