There can be little doubt as to the ascendancy of hub pricing as the key driver of commercial decision making in the European gas market. Hub prices have become

There can be little doubt as to the ascendancy of hub pricing as the key driver of commercial decision making in the European gas market. Hub prices have become the benchmark for customer supply contracts and gas portfolio optimisation across North West Europe. The influence of hub prices is also rapidly penetrating to the South (e.g. Italy and Spain) and into Eastern Europe. But what are the key factors that will drive hub price evolution? And what are the boundaries that are set to contain price levels?

Last week we set out a framework for understanding the drivers of European gas hub pricing dynamics. This approach was built on grouping similar supply sources and focusing in on the flexible supply tranches that drive marginal pricing. In this week’s article we apply this framework to take a more practical look at how commercial decisions drive hub pricing.

At the simplest level, gas supply is about price and volume. A supply stack illustrates supply volumes ranked by price. So a simple pan-European supply stack can be developed by adding price and volume assumptions to each of the tranches of supply we set out last week. A simple supply stack is shown in Chart 1 along with an indicative annual demand level for the European hub zone. 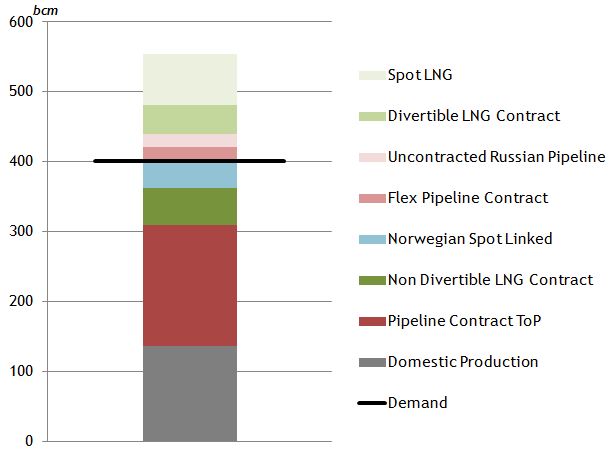 Note 1: Diagram and gas flows based on a European hub zone boundary that covers UK, BE, NL, FR, DE, CZ, AU, CH, IT & ES.  Russian gas contract volumes are based on delivery into this zone (i.e. do not include broader sales into Eastern Europe).

Note 2: The uncontracted Russian pipeline tranche includes 2014 estimates of uncontracted production. Volumes are much larger than this in the medium term.

The supply tranches in the stack chart are broadly ranked from lowest to highest marginal cost. The inflexible supply sources include:

These tranches can effectively be assumed to be priced at zero cost, because the gas will flow regardless of market pricing. In practice these tranches may contain some flexibility (e.g. the ability to bank gas across contract years) but this tends to have only a secondary impact on hub pricing.

Much more important are the flexible tranches of supply that can respond to incremental changes in hub price levels. The key tranches of flexible supply are broken out in the table below along with indicative current price ranges and pricing characteristics. The first three tranches are the key drivers of marginal pricing across the hubs. The next three tranches are supply sources that are ‘out of the money’ at current hub price levels, but can provide incremental volume if required.

The first three supply tranches interact to dominate current hub pricing dynamics. Price levels are anchored by the oil-indexed cost of pipeline swing. The discounted Russian supply contracts that have recently been re-negotiated by major European suppliers are particularly important. These sit at the lower end of the pipeline swing tranche (with contract prices around 11 $/mmbtu) and have a strong influence over marginal pricing.

But the extent to which swing contracts influence hub prices depends on the flow decisions of the Qatari’s and Norwegians. Qatar continues to place a portion of its LNG production into Europe so as not to depress Asian spot prices. Norway flows uncontracted production on top of spot-indexed contract sales to broadly match its annual production targets, optimising this flow across different hubs and time periods.

But both these sources of supply effectively displace pipeline swing contract volumes, causing annual hub price levels to remain at a ‘loosely managed’ level below oil-indexed contract prices. The future evolution of hub prices comes down to whether the balance of power currently exercised by key producers can be maintained.

The evolution of hub price levels over a medium to longer term horizon will be strongly influenced by the strategic commercial decisions of key producers. There are three gas producers with the production flexibility to materially impact the pricing of incremental gas volumes into Europe:

Incremental supply into Europe is of course not limited to these three players. But other sources of supply are typically too small to have significant strategic pricing power. And it is the pricing power of these 3 key players that is the force acting to keep hub prices within a band of oil-indexed pipeline contract supply. All three have a vested interest in trying to ensure that this situation remains. The Russians are the champions of the cause and retain the greatest influence. The Qataris and Norwegians may be more progressive, but they are ultimately sympathetic supporters.

Despite the trend towards the spot indexation of gas in Europe, it is oil-indexed price levels that will likely remain the anchor for the evolution of European hub pricing. Two reasons work together to support this logic:

This outcome relies on the continuing influence of key producers. And with Europe’s growing gas import requirements the balance of power looks skewed in their favour.

A European ‘gas squeeze’ up to Asian price levels is unlikely, despite Europe’s import appetite. There is not a structural requirement for Europe to sign contracts for large new volumes of LNG supply this decade. LNG will play a role in the supply mix, particularly for European gas portfolios with a global presence. But Europe does not need to compete head to head with Asia for long term contracted LNG at the current Asian price premium. Instead the 60 – 100 bcma volume of uncontracted Russian production is likely to be the dominant influence on long term European pricing.

The threat to this dominance is the emergence of large volumes of flexible LNG beyond 2015, causing an overflow of gas into Europe and a battle for market share (i.e. a gas glut along the lines of 2009-10). Europe is a natural home for substantial volumes of flexible LNG if the current Asian price premium were to disappear. This is particularly the case if US export capacity currently being developed to flow to Asia, instead flows towards Europe. A surplus of gas flowing out of Henry Hub at the variable cost of liquefaction and transport (e.g. 7-8 $/mmbtu) could place substantial downward pressure on European hub prices.

An understanding of European hub pricing dynamics comes down to an appreciation of the key pricing boundaries between different tranches of supply. In last week’s article we set out a framework to approach this problem. In this article we have used a pan-European supply stack to illustrate some of the practical pricing implications. The factor that underpins both these views is an understanding of the behaviour, interaction and pricing of Europe’s key tranches of flexible supply. In our view that is the place to focus if you want to get on top of the European gas market.