Global carbon emissions have risen 10% over the last decade. This signals a stronger policy response ahead, with big implications for power & gas markets.

Decarbonisation has rapidly become one of the driving forces of energy market evolution across the last decade. It is shaping the energy policy landscape, propelling rapid evolution of new technologies and spurring vast investment in new infrastructure.

Yet at an aggregate global level there has been no decarbonisation. Global carbon emissions have risen 10% (3.1 billion tonnes) over the last decade (2008-17). After stabilising for three years (2014-16), global emissions stepped higher again in 2017 (rising 426 Mt).

The COP21 Paris agreement laid out a broadly adopted plan to address decarbonisation, with a view to containing global warming. The current trajectories of policy and technology do not look close to being consistent with achieving the sub 2 degree target.

The lack of results to date is unlikely to erode the decarbonisation agenda. Instead it increases the probability of accelerated action over the next decade. That action will likely have a magnified impact on the power sector, and in turn shape the evolution of global gas markets.

In today’s article we take a step back to try and better understand the potential impact of decarbonisation. Specifically we look at the evolution of:

We start with the emissions evidence. Chart 1 shows the trajectory of aggregate global carbon emissions over the last decade. Chart 2 shows the breakdown of emissions across a grouping of 4 major regions. 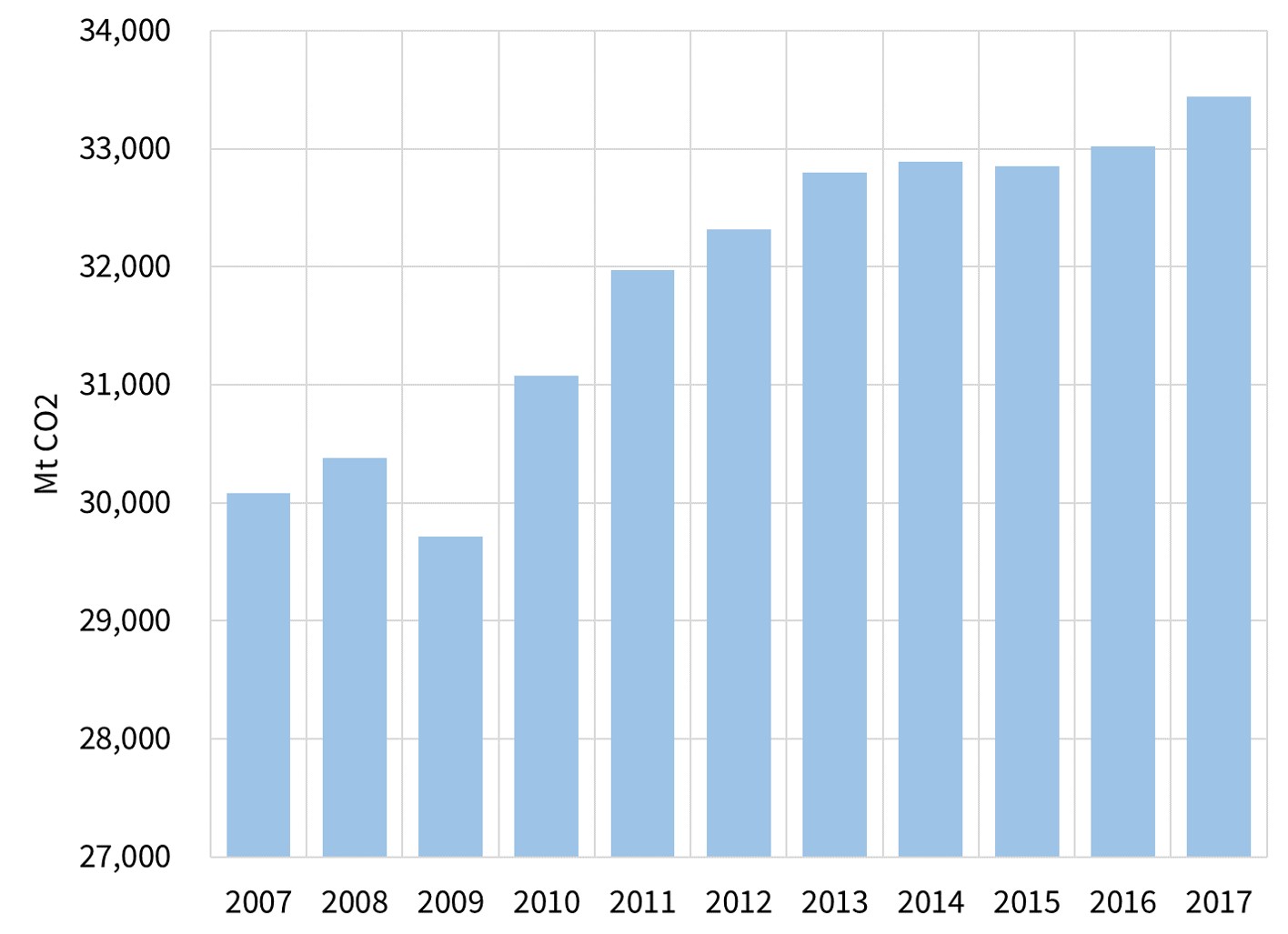 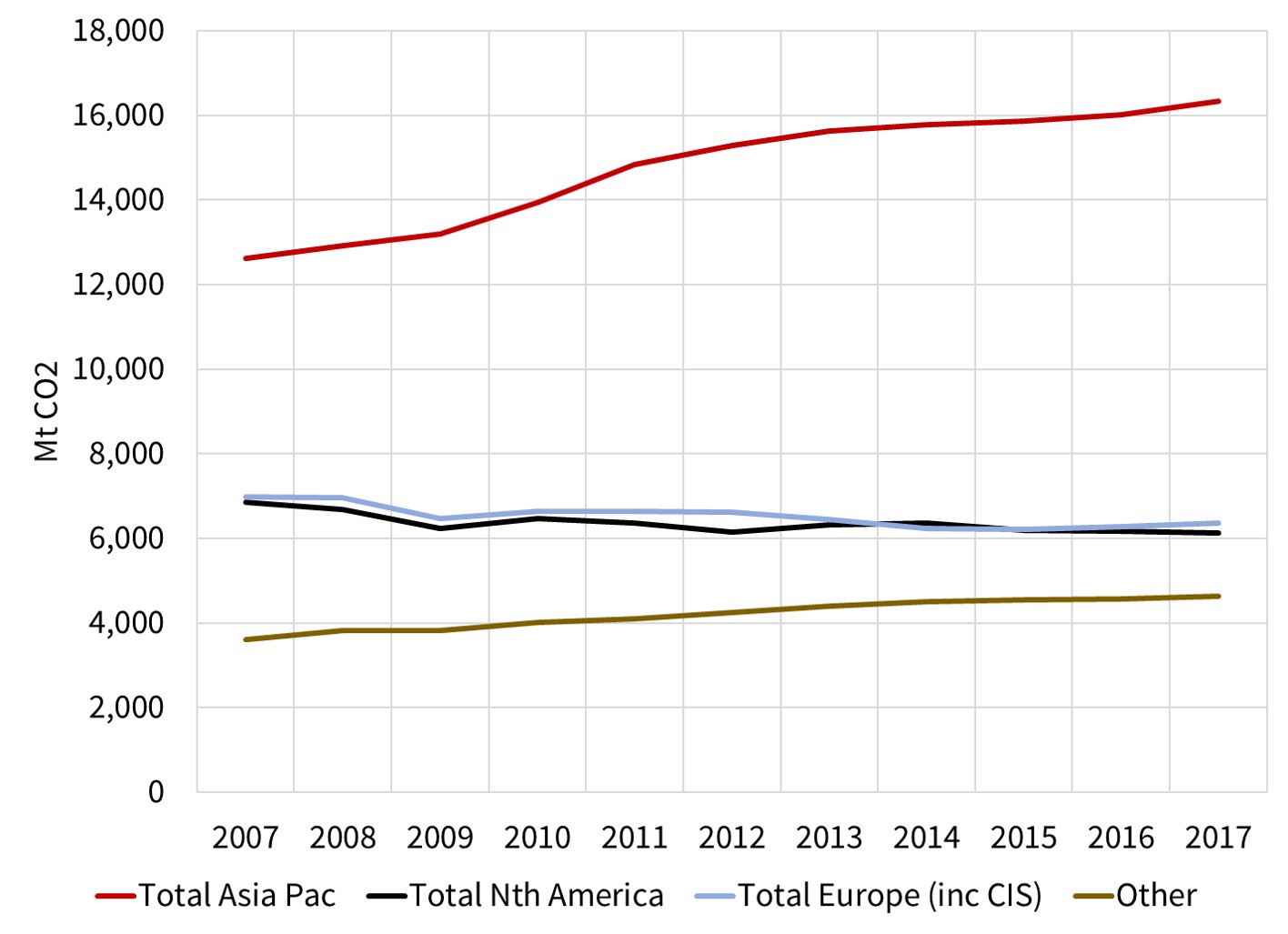 The 10% increase in global emissions across the last decade does not follow a steady path. There are some interesting drivers that influence this:

In contrast to rising emissions from emerging countries, emissions have declined across the more developed European and North American economies.

The problem at a global level is that these modest reductions in Europe and North America are being overrun by much faster emissions growth from emerging economies in Asia (+26%) and ‘Other’ regions (+21%, predominantly Latin America).

The COP21 Paris roadmap stops short of being a cohesive policy implementation plan to drive global decarbonisation. The policy response across signatory countries has been somewhat sluggish and disjointed, not helped by Trump’s attempts to stall progress.

Yet COP21 has marked a shift in the balance of global political and business wills in favour of decarbonisation. This transition is being supported by market price signals e.g. declining cost of capital for renewables, rising cost of financing coal and the substantial increase in climate change related insurance premiums.

Companies across the US, Europe and Asia smell huge profit opportunities from growth in decarbonisation driven investments such as renewables, CHP, storage, EVs, SMR nukes, smarter appliances & enabling software. Capital markets do too.

The power sector is at the frontier of global decarbonisation efforts. From a technical and cost perspective, power is easier to decarbonise than heat, transport & industry. The sharp impact of market price signals on generation shares can facilitate rapid adjustments (e.g. US shale, UK coal). Power sector decarbonisation also sets up the electrification of other sectors (specifically transport & heat).

Chart 3 shows an interesting analysis of the evolution of generation shares across the global power sector, using data from BP’s latest Statistical Review. 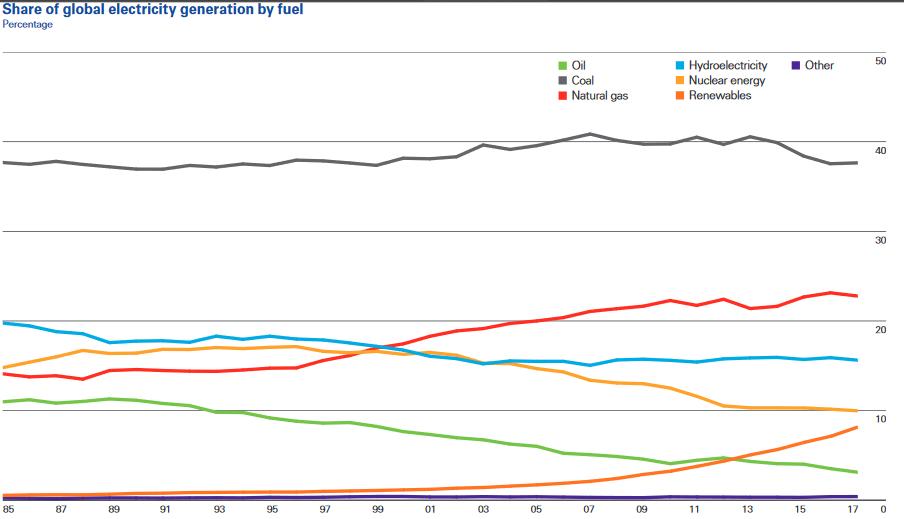 Drawing on this chart, we believe there are five key conclusions that can shape a pragmatic approach to decarbonisation over the next decade.

In summary, the decarbonisation engine is relying too much on one cylinder… renewables. Watch out for a transition to other cylinders sharing more of the load across the next decade. This will have an important impact in shaping the evolution of both power and gas markets.

This is our last article before the summer break. We will return in mid-August to look at the evolution of carbon emissions in Europe and the implications for European power markets. In the meantime we wish you a sunny and relaxing summer.