Momentum behind the role of hydrogen in decarbonising the European gas market is gathering pace. We look at how hydrogen may impact the gas supply chain.

Governments in most of the largest European gas markets are committed to COP21 decarbonisation targets.  Some future targets are likely to be missed. But it now appears very unlikely that governments will either abandon their commitment to large scale decarbonisation by 2050, or substantially delay its implementation.

There appear to be broadly three ways that natural gas (methane) demand can be decarbonised:

Decarbonisation using electrification and biogas alone looks to be a very challenging prospect.  This supports the case for the evolution of significant role for hydrogen. Today we take a closer look at how hydrogen could impact the European gas supply chain.

Methane is structurally embedded in the European energy mix. It is sourced from two main supply chains, pipeline supply and LNG, as shown in the blue boxes in Diagram 1. 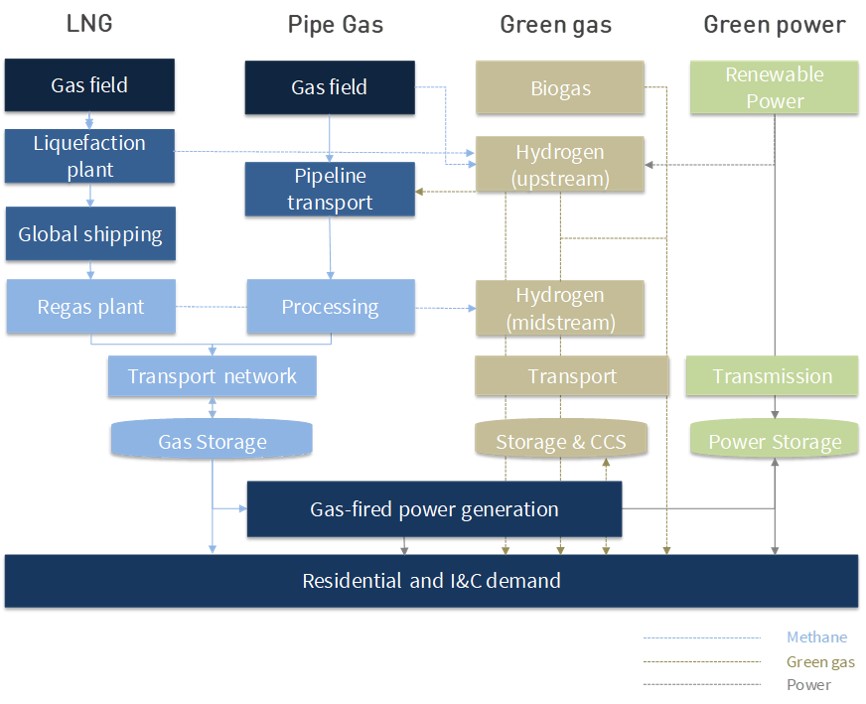 The evolving supply chains required to decarbonise the European gas market are represented in the ‘green gas’ and ‘green power’ chains on the right hand side of Diagram 1.

These low carbon supply chains have had a relatively limited impact on European gas demand to date (wind & solar displacement of CCGTs in the power sector being the most notable impact so far). But this impact is set to accelerate into the 2030s.

The benefits of hydrogen usage

The key benefits of hydrogen relate in part to the challenges associated with biogas and electrification.

The impact of biogas will likely be restricted by limited European resource potential.  It is also expensive to manufacture biogas to a quality & consistency that allows it to be injected into conventional methane networks.  This suggests that the role of biogas will be restricted to dedicated local area networks.

Electrification of the power sector is gathering pace, but there are some big practical challenges to the much touted ‘electrify everything’ solution. For example:

Hydrogen networks could also substantially reduce the requirement for expensive interconnection to decarbonise the power sector.

The means & costs of hydrogen production

Hydrogen is not a new phenomenon. ‘Brown’ hydrogen is widely produced for industrial usage today (e.g. produced by carbon emitting reformation of fossil fuels).  But it is currently relatively expensive to produce decarbonised hydrogen. There are several ways to do this:

The impact of blue hydrogen on the supply chain is complex (as illustrated in Diagram 1).  It is unclear whether methane would be reformed at source & transported (e.g. from countries with low cost methane supply such as the US), or whether reformation would be closer to the burner tip (e.g. at European entry points such as the Russian borders).  This impacts the extent to which elements of the existing methane supply chain could be impacted (e.g. LNG).

The displacement of methane will therefore require substantial policy support.  That could come in the form of a higher carbon price signal, making low carbon hydrogen more competitive. But it will also require coordinated industry and policy action to scale production and reduce costs from current levels (as has happened with low carbon power technologies).

The challenges of hydrogen transmission & distribution

The meaningful displacement of methane at the burner tip will ultimately require widespread replacement of methane network infrastructure and appliances with hydrogen ones. This is being explored with increasing purpose in some Northern European countries, particularly the Netherlands & the UK (who have rapidly declining domestic reserves of methane). But it represents a major challenge.

Hydrogen can also be blended into existing gas networks (up to at least 20% mix with existing methane supply).  This has two very material benefits:

If you find it hard to believe that methane networks could be changed out for hydrogen, there is a precedent. Methane from the North Sea replaced ‘town gas’ (sourced from coal) in the UK in the 1950s and 60s.

Uncertainty makes it even more important to form a view

While the decarbonisation benefits of hydrogen could be substantial, there are some sobering hurdles to overcome.  In the meantime, the policy & technology momentum behind electrification is gathering pace – it is the default option, despite a number of its own challenges.

That provides a strong incentive for existing participants in the European gas supply chain to demonstrate the case for hydrogen.  This is likely to result in accelerating industry & policy action targeting hydrogen over the next 5 years.

Against this backdrop, substantial uncertainty remains as to the pace & penetration of electrification and the future role of hydrogen.  But the impact of these disruptive trends is no longer over the investment horizon.  If you are a participant in the European gas supply chain, the time has come to form a view on the implications for asset risk/return.