The UK Capacity Market is currently being implemented to ensure new flexible capacity is built as older plants retire. While generation investors are focused o

The UK Capacity Market is currently being implemented to ensure new flexible capacity is built as older plants retire.  While generation investors are focused on trying to assess the relative benefits of CCGT vs OCGT capacity, new interconnector capacity is quietly looming as an increasingly competitive alternative.

Interconnectors have been excluded by the UK government from participating in the first auction later this year.  But the government has firmly signalled its intention to include interconnector capacity in the 2015 auction.  In addition to Capacity Market support, Ofgem is paving the way for additional regulatory support in the form of a cap and floor mechanism for interconnector revenues.  With a substantial positive power price differential from Continental markets to the UK, interconnector investment projects are an increasingly attractive proposition.

The BritNed line (UK to NL), commissioned in 2011, provides a reasonable benchmark for the capital costs of laying shorter interconnectors across the English Channel.  BritNed cost roughly £500m for 1GW of capacity, or 500 £/kW on a normalised basis.  This broadly compares to the ‘all in’ cost estimates for the proposed Belgium to UK project (NEMO) and a new UK to FR interconnector.

Costs can vary around this 500 £/kW benchmark depending on project characterstics.  The 1GW Eleclink project (being developed by Eurotunnel and Star Capital) is likely to be significantly cheaper, given it involves laying cable through the existing Channel Tunnel.  The proposed 1.4GW NSN link between Norway and Scotland on the other hand is over a much greater distance with costs closer to 1000 £/kW.

But if we assume 500 £/kW as a reasonable cost benchmark for short interconnection projects, then this is a similar level to new build OCGT capex, and compares favourably to CCGT new build at around 700 £/kW (all in).  But cost competitiveness is only part of the picture.  Wholesale energy revenue dynamics also play an important role.

For shorter interconnection projects (to FR/NL/BE), the key driver of revenue is the spread between Continental power prices (predominantly set by coal prices) and UK power prices (predominantly set by gas prices).  The locational forward market price spreads between the Continent and the UK are currently substantial, rising above 20 £/MWh from 2016 as illustrated in Chart 1 below. 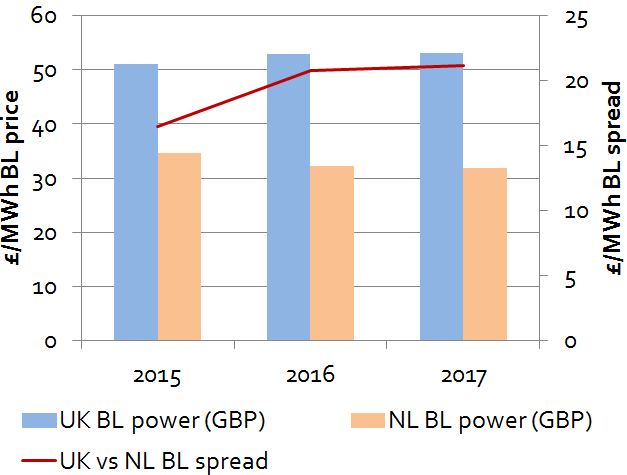 The revenue dynamics for the Norwegian interconnector are even more attractive given Norwegian power prices typically trade at a substantial discount to the UK (in normal and wet hydro conditions).

But as with CCGT investment projects, somebody needs to bear the asset’s market risk exposure (i.e. the fluctuations in locational price spread levels).  This is where regulatory support will play a key role.

There are two main sources of potential regulatory support for UK interconnector developers:

The cap and floor mechanism is a hybrid policy support mechanism based on a combination of the UK’s merchant interconnector model and the regulated asset model used on the Continent.  It is being designed to support the UK – Belgium NEMO interconnector project.  But Ofgem’s intention is to extend this template to support other interconnector projects.  Under the design, if revenues rise above a pre-determined cap level they are returned to consumers.  While if revenues fall below a floor level the asset owner is supported by consumers (via network charges).  Ofgem has proposed that the cap and floor levels are fixed ex-ante and escalated for inflation.

Inclusion of interconnectors in the Capacity Market would allow access to an additional capacity revenue stream, potentially under 15 year fixed price capacity agreements.  But the key regulatory issue that remains unresolved is how interconnector capacity will be de-rated for availability, given dispatch is not directly controllable.  That is a challenge for DECC to overcome before including interconnector projects in the 2015 capacity auction.

A combination of the factors outlined above mean that interconnector capacity may be in a strong position to displace new CCGT build:

The last of these three factors means that interconnector capacity is actually an attractive diversification option for owners of gas plant portfolios.

The last factor which plays in favour of interconnectors is access to finance.  Unlike gas-fired power plants running at low load factor, the risk profile of interconnector investments is much more consistent with that of traditional infrastructure and pension fund capital.  This is particularly the case with a cap & floor revenue support structure and the ability for asset owners to sell multi-year capacity contracts to reduce market risk.  It is our view that interconnectors can play a central role in providing the incremental flexible capacity that the UK requires into next decade.