Gas reciprocating engines are emerging as a key source of peaking capacity in European power markets. They are cheaper & more flexible than CCGTs and have very low start costs. This makes engines much better suited to providing flexibility to back up swings in wind & solar output.

Engines also have a greater potential viability for hydrogen firing than CCGTs. The costs & practicalities of hydrogen firing is currently an important focus for infrastructure and renewable investors. The reason: ESG driven investment mandates.

For many investors, capital deployment in gas-fired power assets can now only be undertaken if there is a credible path to decarbonising asset footprints in the 2030s.

In today’s article we look at investment value drivers for hydrogen fuelled engines.

Hydrogen can be burnt in what is essentially an upgraded version of a standard reciprocating engine, e.g. to deal with higher combustion temperatures. The conversion process does not require any substantial technological evolution i.e. it can be done now.

The current cost of producing green hydrogen in Europe is above 15 €/kg. The key driver is the feed cost of power for electrolysers. Surging energy prices across Europe have driven up the costs of both green & blue hydrogen.

Even if energy prices return to pre-crisis levels the cost of green hydrogen production remains prohibitively expensive for use as a fuel for power generation (at least 6-8 €/kg for European produced green hydrogen).

How much do costs need to fall?

The EU has set a 2030 target for reducing the cost of green hydrogen to below 2 €/kg. It is an understatement to say that this is an ambitious target.

Reduction of hydrogen production costs is constrained by the laws of thermodynamics which determine energy losses from the electrolysis process. Achieving the EU target effectively relies on sourcing extremely cheap power (in the order of 10 €/MWh average feed power prices or less). That in turn relies on large volumes of surplus renewable energy.

Chart 1 quantifies the scale of the fuel cost challenge for hydrogen peakers. It shows the potential Short Run Marginal Cost (SRMC) competitiveness of hydrogen vs gas fuelled engines at different potential hydrogen costs (2 vs 4 €/kg) in the mid 2030s. 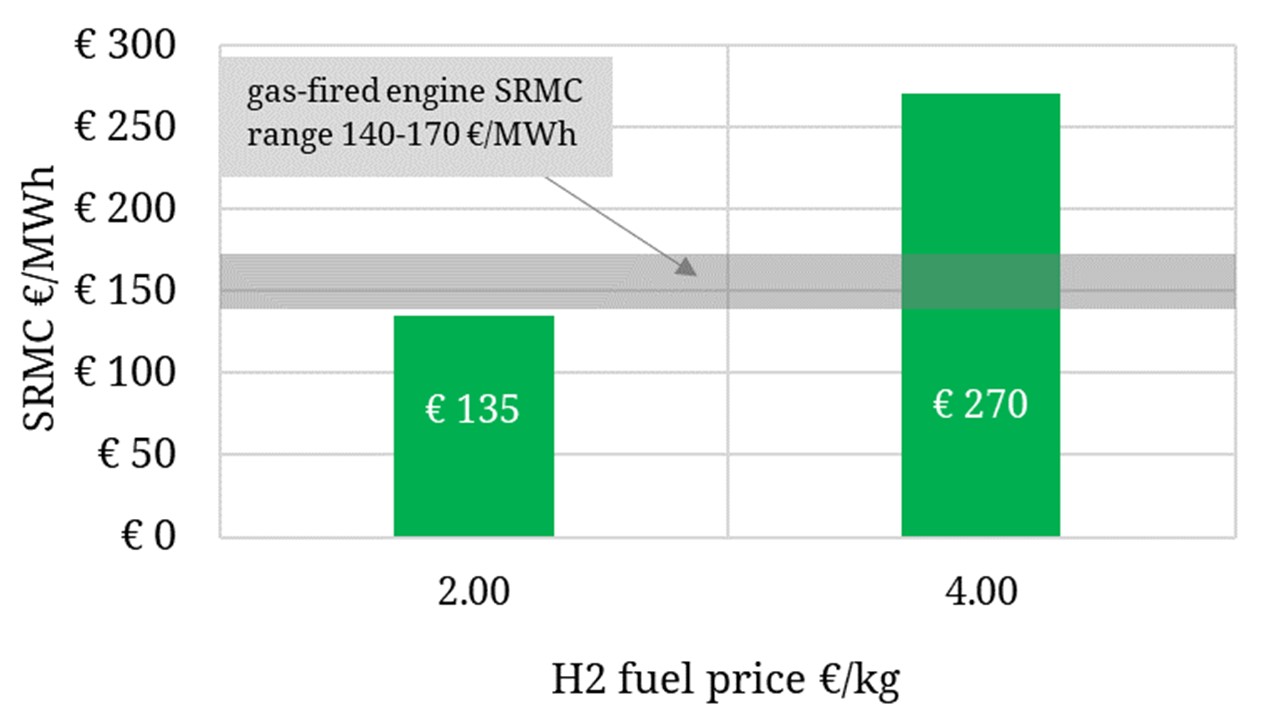 The grey shaded range in the chart shows the projected SRMC (variable production cost) of a gas fired engine in the mid 2030s (assuming a 150 €/t carbon price & gas costs in an 8-10 $/mmbtu range).

If we assume the EU achieves its ambitious goal of 2 €/kg (by mid 2030s) then hydrogen fired peakers can directly compete against gas (left hand bar).

However if hydrogen costs only come down to 4 €/kg (or even 3), hydrogen fuelled peakers will likely remain significantly more expensive on a variable cost basis than gas. This does not necessarily inhibit hydrogen engines from playing an important role in providing low load factor backup flex in periods of low wind & solar output. But it suggest the economics of hydrogen engines would rely strongly on either:

Both of these are plausible outcomes if Europe is going to achieve net zero power sector emissions in the 2030s.

It is of course uncertain what the cost will be to source hydrogen in future. But this doesn’t negate the requirement to analyse the potential impact of hydrogen firing as part of an engine investment case.

In Table 1 we set out 5 drivers that impact the potential viability of switching a peaker site to hydrogen e.g. in the mid 2030s.

Table 1: 5 drivers that impact the potential viability of switching a peaker site to hydrogen

Clean hydrogen will likely remain a premium cost energy source for at least the next two decades, but one with strong policy support momentum to enable scaling and reduce costs.

That doesn’t preclude the viability of hydrogen as a ‘super peaking’ fuel to fill major gaps in wind & solar output (e.g. beyond the inventory of batteries). But it is important to challenge the numbers required for a viable transition from gas to hydrogen firing and analyse the value of this option as part of a peaker investment case.

We set out a new phase in Europe’s energy crisis & how it is infecting global financial markets. We also look at 5 energy trends emerging across H1 2022.
Read more