Japan is the elephant of LNG importing nations. Japanese demand accounts for about 35% of global LNG imports, dwarfing South Korea in second place (at around 1

Japan is the elephant of LNG importing nations.  Japanese demand accounts for about 35% of global LNG imports, dwarfing South Korea in second place (at around 15%).  The post Fukushima closure of Japhttps://timera-energy.com/wp-admin/post.php?post=3360&action=editanese nuclear reactors and the resulting increase in gas-fired generation sent shockwaves through the global gas market in 2011.  This step change in Japanese demand has been the primary driver underpinning the current phase of global gas market tightness that has prevailed since Q1 2011.

As a result of the nuclear closures, Japan is now confronting an explosion in energy costs as import volumes of gas and oil have increased at the same time the yen has declined.  Nuclear power remains deeply unpopular in Japan.  But the new Japanese government is confronting the harsh reality that it cannot afford a nuclear free future.  The scale and pace of Japanese nuclear restarts will be instrumental in shaping the evolution of the LNG market over the next two years.

The post Fukushima shutdown of Japan’s 54 nuclear reactors has caused a sudden increase in Japanese energy import dependence.  In the absence of nuclear power, the world’s third largest economy is only 4% energy self sufficient.

The recent depreciation in the yen, around 20% against the USD since Q4 2012, has caused another jump in the cost of Japanese LNG in 2013.  The restart of nuclear reactors may be politically unpopular, but by delaying nuclear restarts Japan risks crippling its economy with rising energy costs.

There is considerable uncertainty around the regulatory process, timing and number of reactor restarts.  Initial restarts will likely displace more expensive oil-fired generation ahead of gas-fired power plant.  But there can be no doubt that a return to nuclear generation will materially reduce Japanese LNG demand.

The chart below from Reuters shows the impact the Fukushima disaster has had on monthly LNG consumption since Q1 2011. 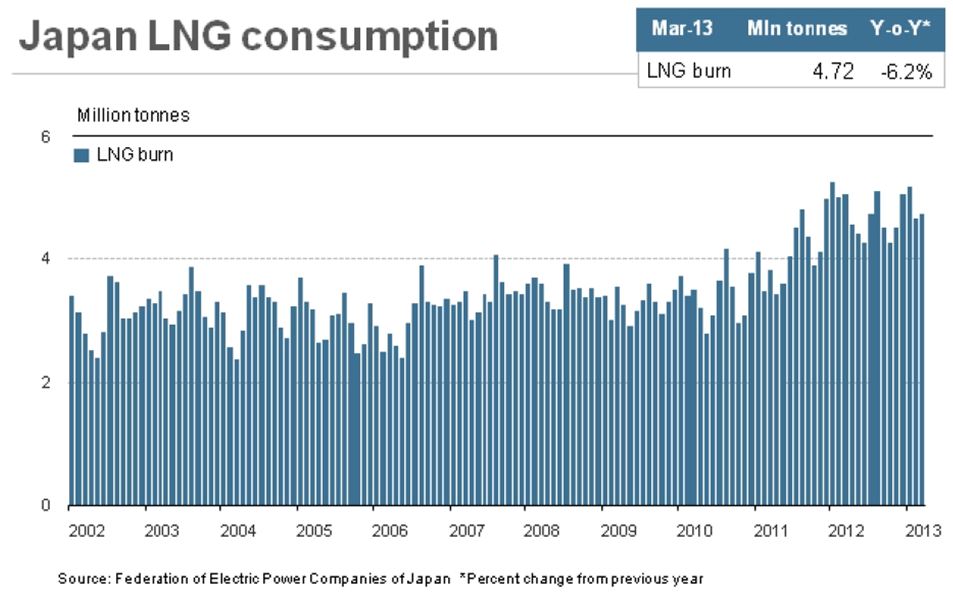 Shinzo Abe’s Liberal Democratic Party (LDP) government was elected in a landslide in Dec 2012 on a platform of radical economic reform.  Central to this reform has been a ‘strong-arming’ of the central bank (BoJ) into a massive programme of quantitative easing in an attempt to (i) raise inflation expectations and (ii) devalue the yen to support Japanese exporters.  Japan’s monetary easing at $65 billion per month now dwarfs US quantitative easing on a GDP adjusted basis.  It is the anticipation and implementation of this radical shift in monetary policy that has lead to the rapid depreciation of the yen since Q4 2012.

As the yen has declined, the increasing cost of energy (particularly LNG) has caused a pronounced shift in Japan’s balance of payments.  A perennial trade surplus has been replaced by sharply rising trade deficits.  In other words the increased cost of energy is more than offsetting the benefit of a weaker yen for Japanese exporters.

Japan is to a large extent hostage to the global market price for oil and LNG, although the Japanese government has been lobbying Obama to approve US exports of LNG to open up a new source of supply competition.   The most obvious mitigation measure the government has to combat the economic pain from rising energy costs is the fast tracking of nuclear restarts.

Only two of Japan’s 54 reactors have been restarted since the Fukushima earthquake.  The main hurdle that Japanese utilities face before restarting further reactors is compliance with a revised set of safety standards, shortly to be enacted by the Nuclear Regulation Authority.  This regulatory hurdle means the timing of start-ups is uncertain, but current expectations are for reactors to start returning to service from early 2014.

Restarting nuclear reactors has the obvious primary benefit of reducing the volume and hence cost of Japan’s energy imports.  A less obvious but important secondary benefit, comes from Japan’s status as a key driver of marginal global LNG pricing.

Just as nuclear closures caused a tightening in the LNG market in 2011, nuclear restarts will be likely to have a dampening effect on global LNG pricing going forward.  This should act to reduce Japan’s cost of future gas import volumes.  It may also act to increase the potential overhang of new sources of supply later this decade (e.g. Australia, US exports, Canada, East Africa).  The bottom line is that nuclear closures have increased Japanese LNG demand by approximately 15 mtpa (21 bcma).  This equates to around 6% of global LNG demand.   So any concerted return to nuclear generation by Japan is likely to have a significant impact on the global LNG supply/demand balance and in turn on price levels.

There has been much fanfare surrounding the introduction of ‘Abenomics’ in Japan over the last 6 months.  Whether this has any real long run impact on an economy that is mired in debt remains to be seen.  But aggressive monetary policy that targets yen devaluation increases the pressure on the Japanese government to accelerate nuclear restarts.