It has again been a lively winter in the global LNG spot market, with winter buying driving Asian prices above the 20 $/mmbtu level. There has also been strong

It has again been a lively winter in the global LNG spot market.  Spot prices are following a pronounced seasonal shape as winter buying has driven Asian prices above the 20 $/mmbtu level.  What has been interesting this year is the level of competition from European buyers, particularly from Spain and Turkey, to secure flexible cargoes.  The knock on effect of Spanish LNG demand, has been a period of structural separation between gas prices in South West and North West Europe.

The Iberian peninsula is relatively isolated from the rest of the European gas market.  Although interconnector upgrades are under development, there is a tight constraint on cross border capacity from Southern France into Spain.  In turn there is another key transmission constraint separating the PEG Sud and PEG Nord hubs within France (as we describe in more detail here).  So tightness in the Spanish gas market can drive quite pronounced price separation across the Spanish AOC, PEG Sud and Northern European (NBP/TTF/NCG) hub boundaries.

LNG supply rarely drives marginal hub pricing in Northern Europe (although one notable exception is the Mar/Apr 2013 price spike at NBP).  But the situation is different in Spain given the prominence of LNG as a supply source.  Spanish gas market prices (represented to some extent by the relatively illiquid AOC hub) tend to exist in one of three states:

The impact of this third state (i.e. LNG spot influence) has been felt to some extent across the last three winters.  It has been particularly prominent this year given issues within the Spanish market.

A good way to visualise the impact of LNG prices on the Spanish gas market is to look at the evolution of a Spanish spot LNG benchmark.  Chart 1 shows a LNG spot price snapshot from the Reuters power and gas team, displaying the evolution of different Waterborne spot price benchmarks. 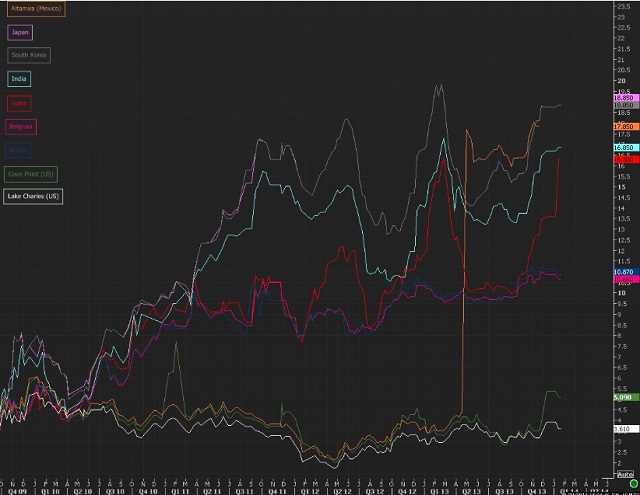 The Spanish spot price benchmark is shown in red.  Over the last three years, Spanish spot LNG prices have fluctuated between:

During times of ample Spanish supply, e.g. Summer 2013, there is a broad convergence of Spanish prices with NW European hubs.  However during the last three winters, Spanish prices have risen to attract an adequate level of LNG flow into Spain, given competition from Asian and South American buyers.

There are a combination of factors this winter that have led to rising Spanish prices.  Lower renewable (wind & hydro) and nuclear output has provided an unexpected boost to gas-fired generation volumes.  In addition there have been significant Algerian production issues that have curtailed contract supply into Spain.

Despite the current winter tightness, spot LNG prices are unlikely to remain the dominant influence in the Spanish market for long.  As the current seasonal spate of competition for cargoes between Spanish, Turkish and Asian buyers dissipates, the pull of European hub prices will likely re-assert.  Over the last 5 years, Spain has suffered a pronounced erosion of gas demand from economic weakness and a fall in gas plant load factors.  Until these effects are reversed, periods of gas market tightness are likely to be temporary rather than structural.   And an expansion of cross border capacity with France will only strengthen the pull of European hub price convergence.