2020 has seen a renewed onslaught of oversupply… higher LNG imports have started to breathe life back into the value of European regas capacity.

We dissect the structural shift in LNG market balance that took place in 2019 and look at its impact on European regas capacity.

2020 has seen a renewed onslaught of oversupply… higher LNG imports have started to breathe life back into the value of European regas capacity.

The LNG market balance shifted dramatically from relative tightness in 2018 to oversupply in 2019. As last year drew to a close, there were some early signs of demand growth recovery. But 2020 has seen a renewed onslaught of oversupply, reinvigorating the trends established in 2019.

The US gas market has also seen major price weakness in 2020. Henry Hub price declines reflect a growing domestic gas glut, driven particularly by associated gas volumes (e.g. gas prices in the Permian Basin have fallen below 0.50 $/mmbtu).  Falling US gas prices are acting to pull down the US LNG shut in support levels for TTF & JKM prices.

In today’s article we look at 3 charts that dissect the structural shift in market balance that took place in 2019.

Supply is the more transparent part of the LNG market equation, given large projects and long lead times. Year on year changes in supply are dominated by new liquefaction projects coming online as illustrated in Chart 1. 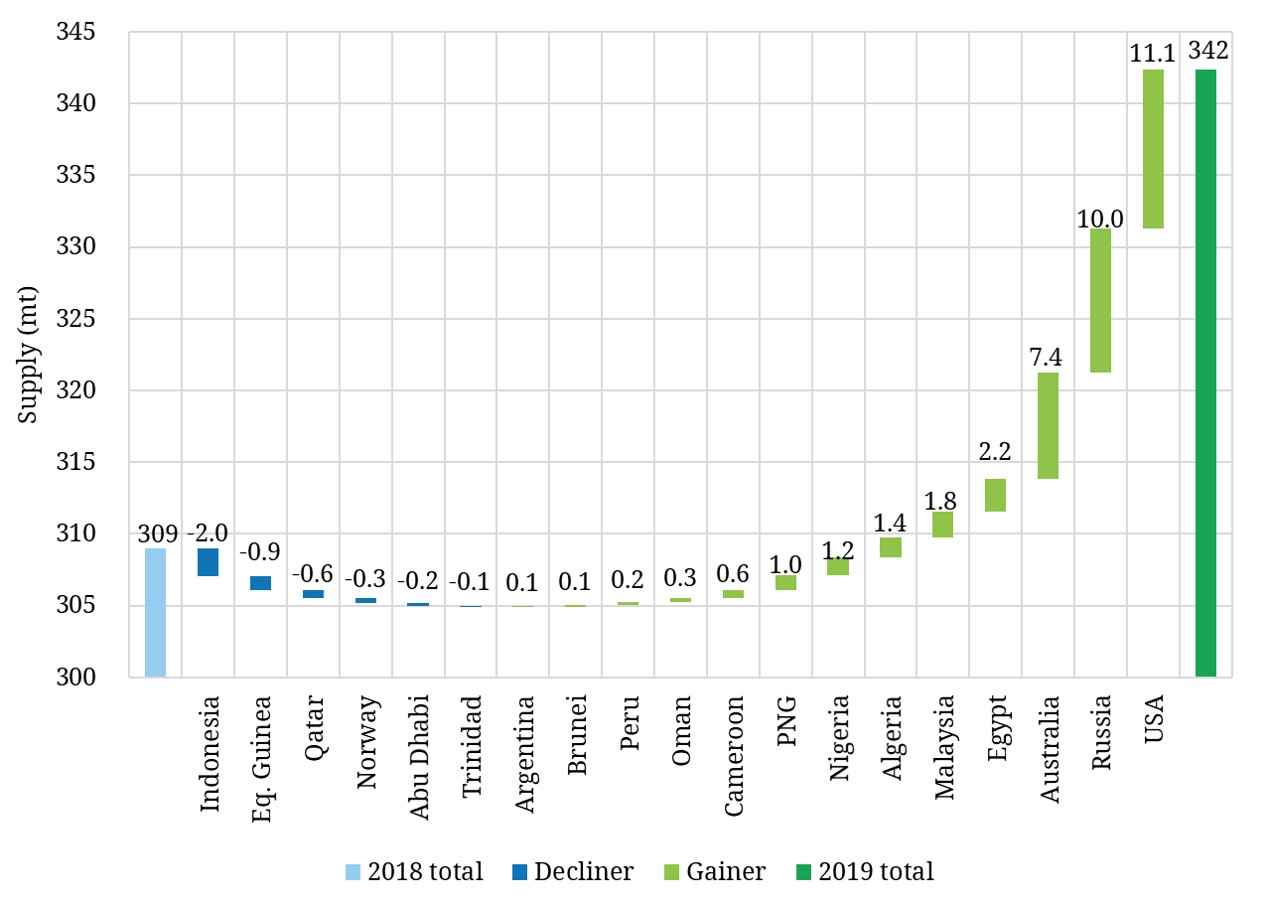 Investments in new supply were made in anticipation of robust Asian LNG demand growth.  There was scant evidence of this in 2019, with weaker demand being the main driver of a shifting market balance.

Demand shift from Asia to Europe

The impact of rapid new supply growth shown in Chart 1, was compounded by outright declines in demand from the traditional pillars of Asian demand.

Japan, Korea and Taiwan (JKT), all saw declining demand in 2019 as shown in Chart 2. This was reinforced by weaker demand in South America (Argentina & Chile) and the Middle East. 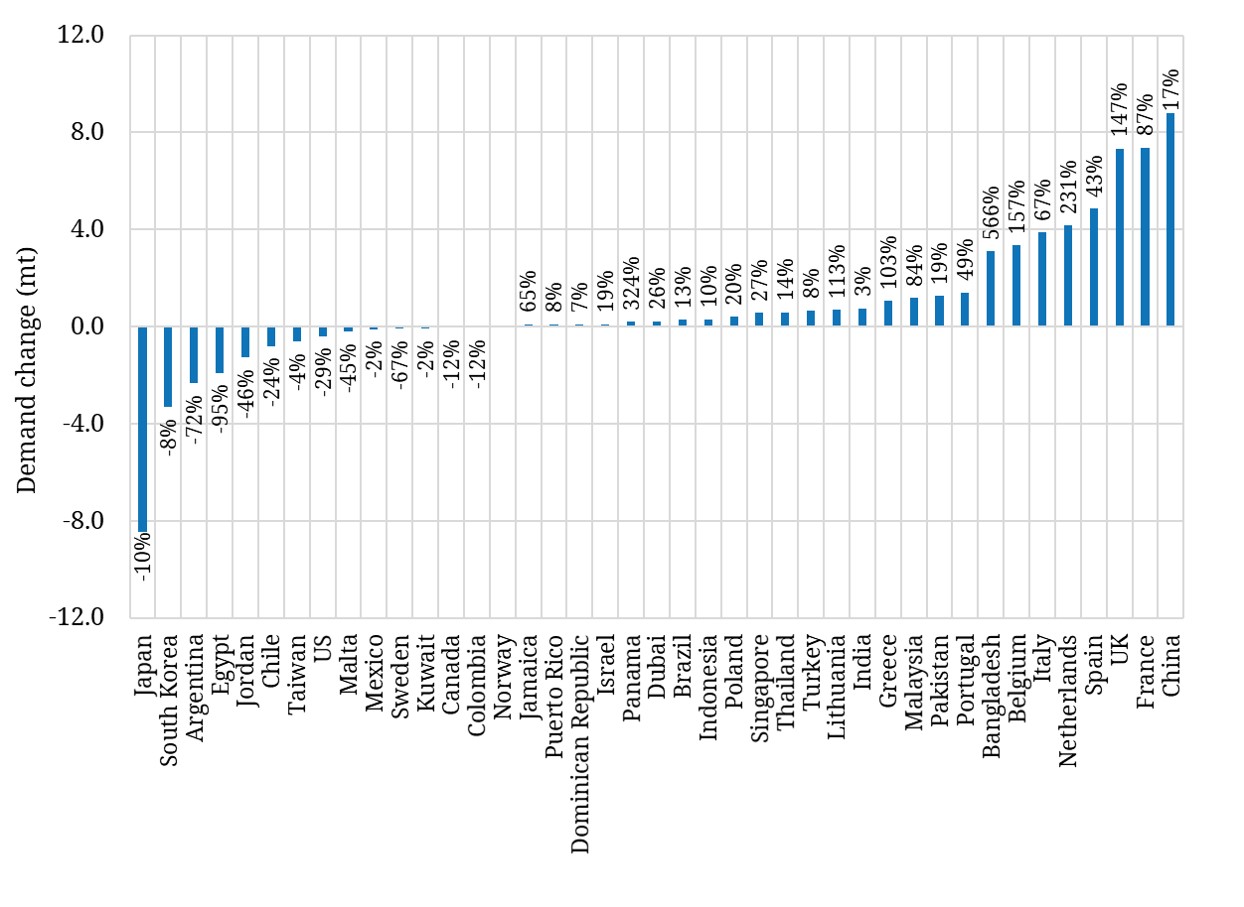 The combination of rapid supply growth and weak demand saw large volumes of surplus LNG flow into Europe. The right hand side of Chart 2 is dominated by countries with regas terminal access: France, UK, Spain, Netherlands, Italy, Belgium & Portugal. It is not difficult to see why in 2019 European hub prices declined and CCGT load factors surged!

China was once again the country with highest demand growth by volume last year.  But the 17% Chinese demand growth rate was less than half of its 2018 level.

Some other Asian markets also saw rising demand, helped in part by liberalising gas markets (e.g. Malaysia received its first Third Party Access cargo in 2019). But outside Bangladesh and a more measured increase in Pakistan, there was not much demand growth action from other emerging markets.

The natural consequence of rising European LNG imports is increasing regas terminal utilisation.  This is illustrated in Chart 3 which shows aggregate European regas terminal send out volumes vs maximum send out potential. 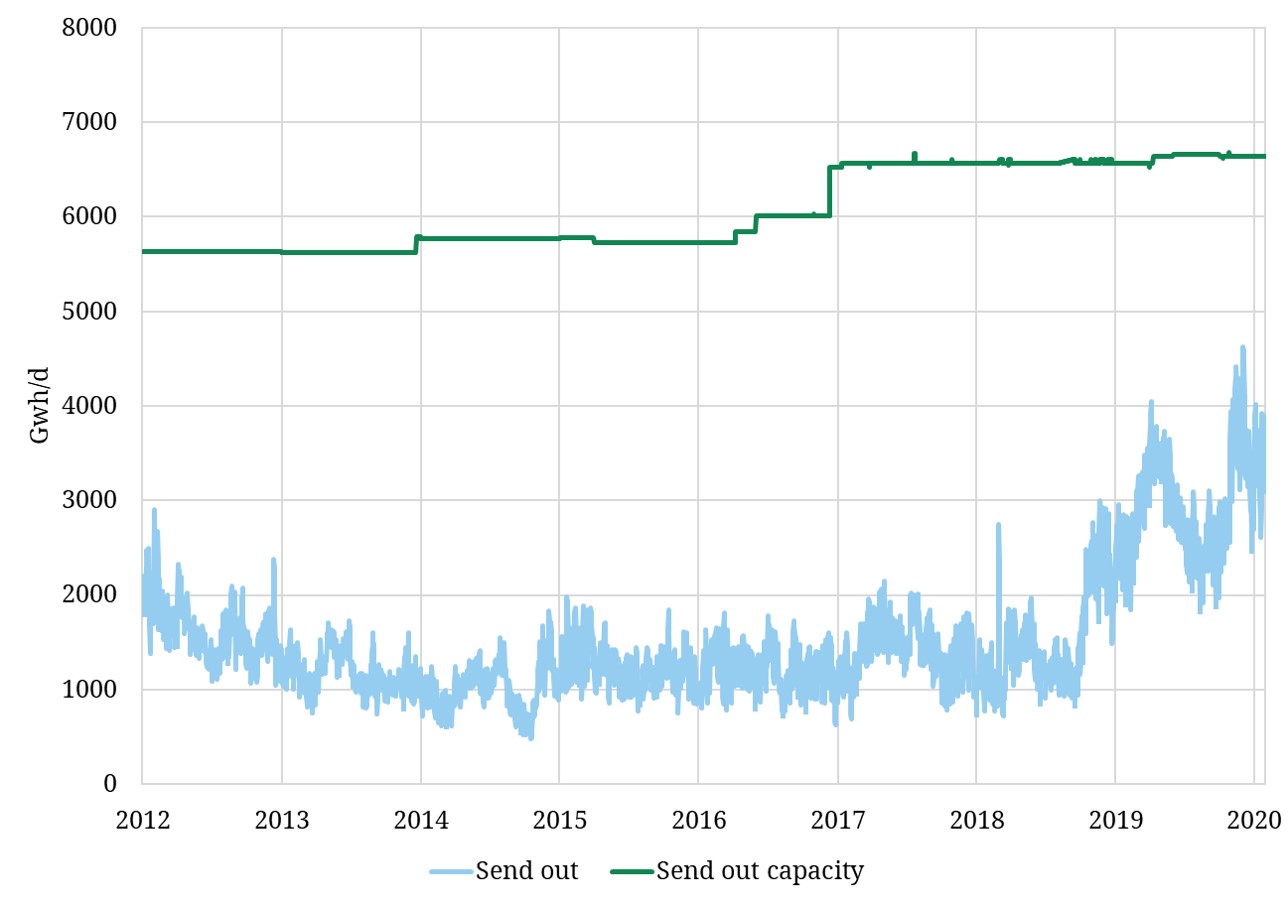 Up until Q4 2018, Europe had seen many years of low regas terminal utilisation. But Chart 3 illustrates how a growing global surplus of LNG has seen average regas utilisation across Europe more than double in the last 18 months.

The chart appears to show what is still a healthy level of headroom between current send out and maximum potential. But this pan-European view of regas utilisation hides constraints that have emerged at individual terminals.

A number of terminals have seen very high or maximum capacity utilisation across 2019-20, for example Bilbao in Spain, Świnoujście in Poland, Adriatic (Cavarzere) and Zeebrugge. The impact of high import levels on NW European regas utilisation has been reinforced by a growing transhipment requirement for icebreakers bringing Russian LNG to market.

There are a handful of regas terminal development projects under way in Europe e.g. Wilhelmshaven in Germany and the Świnoujście expansion in Poland. But regas capacity growth looks to be fairly limited across the next 5 years. On the other hand there is a rapidly growing volume of divertible LNG supply that can flow into Europe during temporary or more structural periods of oversupply.

Higher LNG imports have started to breathe life back into the value of regas capacity across 2019-20.  This looks set to continue through the 2020s with growing European import dependency and a structural tightening in regas capacity headroom.

With growing interest in European regas capacity, we set out regas slot value drivers and the 4 components of slot value. We also look at how these can be quant
Read more
Featured Article
7 Oct 2019

Asian demand growth stalled in H1 2019. This continues to ‘snowplough’ the front of the TTF curve, but could precipitate a tighter market in the 2020s
Read more