We look at the impact of LNG voyage distances on shipping costs and how this drives the flow of cargoes towards Europe versus Asia.

LNG shipping has grabbed an unusual amount of headline space across the last year. The primary reason has been a tripling in spot LNG vessel charter rates between Q1 and Q4 2018.  Charter rates rose from $70k to $220k per day, before falling back towards $150k towards the end of the year.

A shipping cost increase of this magnitude has a material impact on the LNG market.  For most sources of destination flexible LNG production, higher charter rates tend to support cargo flows into Europe given shorter delivery routes (vs longer routes to Asia). The 2018 increase in shipping costs has been an important factor behind the ramp up in European LNG imports since Q4 2018.

The market for LNG vessels is increasingly commoditised and liquid.  Like any other competitive market, supply and demand drive pricing. One of the key factors tightening supply over the last two years has been an increase in average voyage distances.  Longer voyages mean that vessels are tied up for a greater period of time in delivering each cargo.

Chart 1 shows the evolution of average voyage distances in the LNG market across the last 15 years. 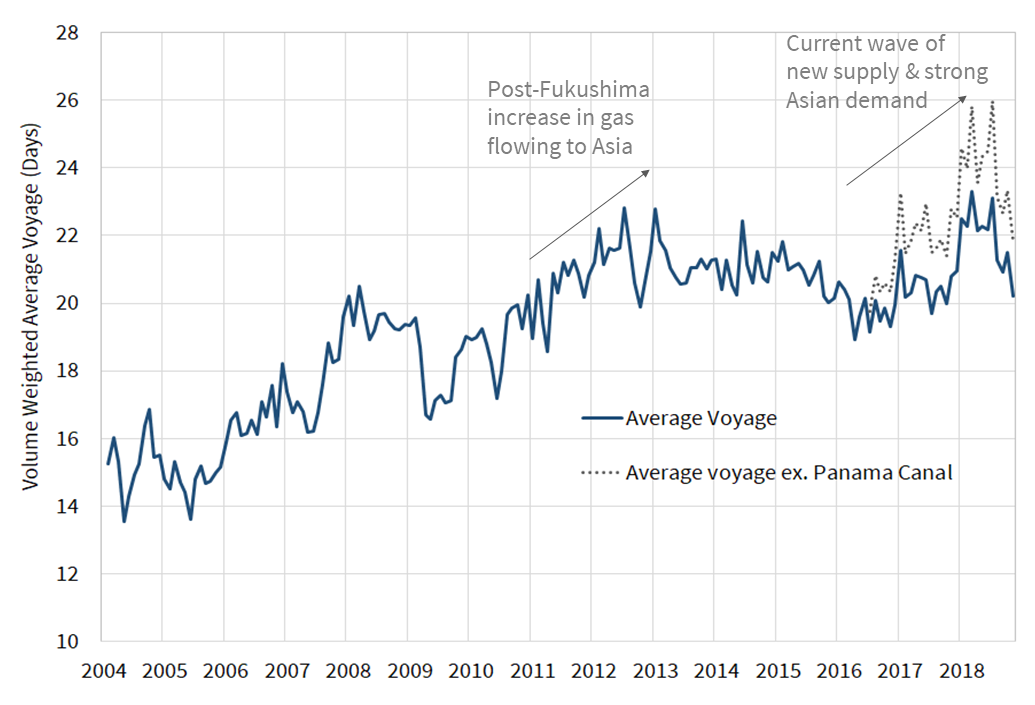 Source: Timera Energy. The commissioning of the Panama Canal expansion in 2016 has shortened voyage times from the US to Asia. To illustrate the impact of this structural change, the second dotted line shows an estimate of average voyage time if the Panama canal expansion had not taken place.

Over time, new supply (e.g. from the US) has been located further away from key demand centres (primarily in Asia). This dynamic has been the structural driver behind rising average voyage times across the chart horizon.

But beneath this key trend are some other interesting observations.  Firstly, voyage times increase in periods where strong Asian demand results in diversion of cargoes to Asia e.g. 2011-13 post Fukushima and 2016-18 strong Asian demand.

Secondly, voyage times tend to decline or stabilise during periods of LNG market weakness as a greater volume of cargoes flow into Europe (typically via shorter delivery routes vs Asia) e.g. during the 2009-10 post financial crisis slump and the 2014-16 period of oversupply.  This dynamic is also behind the steep decline in average voyage distance at the end of 2018 (as LNG flowed back into Europe in Q4).