As year end approaches we focus on the major surprises in European gas & power markets across 2018.

As the Christmas break rapidly approaches, it is time for our traditional year end review of energy market surprises.

We approach this in two parts in today’s article:

Hope you enjoy the ride.

A review of our 2018 surprises

As usual we published a set of 5 potential surprises in Jan 2018.  We below do a quick review and progress check on each of them below.   A reminder that these surprises are not forecasts or predictions, but rather areas where we think it is worth challenging prevailing industry consensus.

1. A setback for LNG prices

Chart 1 shows Asian spot LNG prices started the year at 11.0 $/mmbtu. To everyone’s surprise, prices again reached this level over the summer, with another year of blistering Chinese LNG demand growth.  But the North Asian spot markers look to be ending the year closer to $8.5/mmbtu.

The setback in prices came, but it was very much a Q4 story. Supply has ramped up into year end, both via new projects & from the seasonal increase in liquefaction plant output as temperatures cool. At the same time Asian demand for spot cargoes has been tepid in Q4.  Asian buyers appear well contracted into winter (after being caught short the last two years) and weather has so far been mild.  This has caused a substantial Q4 ramp up in cargoes ‘spilling’ into Europe.  So the setback came but not as most people imagined it. 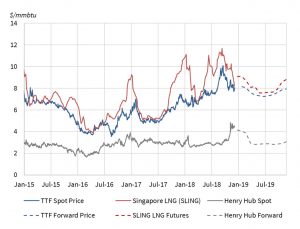 This surprise was rooted in a scepticism of bitcoin, but a constructive view of the peer to peer transaction mechanism underpinning it. Bitcoin crashed in 2018, while development of blockchain applications steadily progressed.

The Nov 2018 launch of VAKT, a blockchain based trading platform for crude oil (backed by e.g. BP, Shell, Gunvor, Mercuria), marked perhaps the highest profile energy progress.  But the more innovative use of blockchain to support the evolution of distribution connected energy evolution (e.g. roll out of renewables, flex, efficiency) remains in the early stages of evolution.  Will 2018 go down as the ‘take off’ point for blockchain in energy? No.

2018 has undoubtedly been a tougher year for UK distribution connected flexible assets. This is in part linked to a dual capacity market surprise: (i) a low 8 £/kW clearing price in Q1 and (ii) a sudden suspension of the capacity market in Q4. From a battery perspective falling frequency response prices have also hit margins.

2018 started with a ‘wall of capital’ looking to invest in distribution connected flex.  This was reflected in strong competition to purchase two of the UK’s leading flex portfolios (UKPR & Greenfrog), competition that somewhat fizzled out after the Q1 auction result. This tempering of investor enthusiasm is a setback not a roadblock. But it is forcing investors & developers to focus on evolving more robust merchant business models going forward.

This surprise came in two parts: (i) rapid growth in liquidity of the traded LNG market and (ii) Gazprom fully conceding to hub price penetration in Europe. It was in essence a big step towards a global gas market underpinned by a TTF hub price signal.

LNG market liquidity has grown rapidly this year.  This has been helped by price volatility, continued expansion of flexible supply and trading intermediaries and significant growth in portfolio hedging against TTF (ICE TTF futures volumes up 70% in 2018).  But the extent to which Gazprom has embraced hub prices is a bigger surprise, via (i) contract concessions to reflect TTF (ii) directly auctioning supply and (iii) selling uncontracted production directly at hubs.

Low interest rates and a search for yield appeared to be fuelling tailwinds for fund investment in European energy infrastructure at the start of 2018.  But as it turned out, this year’s biggest M&A activity in Europe was focused on utilities (e.g. E.ON / Innogy,  China Three Gorges / EDP and Total / Direct Energie deals).

In the gas & oil space, North Sea fund activity continued in both upstream & midstream assets (e.g. Wren House acquisition of NSMP UK gas processing assets). But if anything this was at a slower pace than 2017 and did not reflect a ramp up in fund acquisition activity.

A few 2018 surprises with the benefit of hindsight

So what else made headlines in 2018?  We summarise five things we think shook the consensus tree in Table 1 below.

Our client base has continued to expand in 2018 with new clients including JP Morgan, Cheniere, Axpo, Sumitomo, Ineos, Smartest Energy, Drax & Triton.

Our client work this year has included:

To support this work we have again been actively growing the Timera team in 2018, with some exciting new additions also in the pipeline for 2019.

This is our last feature article for 2018.  But we’ll be back in early January with a set of new surprises for 2019.  In the meantime, we will be continuing to publish material via the Angle and Snapshot columns.

We wish you all the best for a relaxing festive season!