We take a tour of the 5 countries likely to dominate the next wave of LNG supply (2023-30) to see how projects line up on a competitive basis.

The current wave of new LNG supply consists of more than 150 mtpa of committed liquefaction projections coming online between 2015 and 2022. But considerable uncertainty remains as to the size, source and timing of the next wave.

In today’s article we take a tour of the 5 countries likely to dominate the provisions of additional liquefaction capacity to meet LNG supply growth across Asia, Europe and Latin America.  Chart 1 shows an illustrative scenario of next wave supply across the top 5 players. 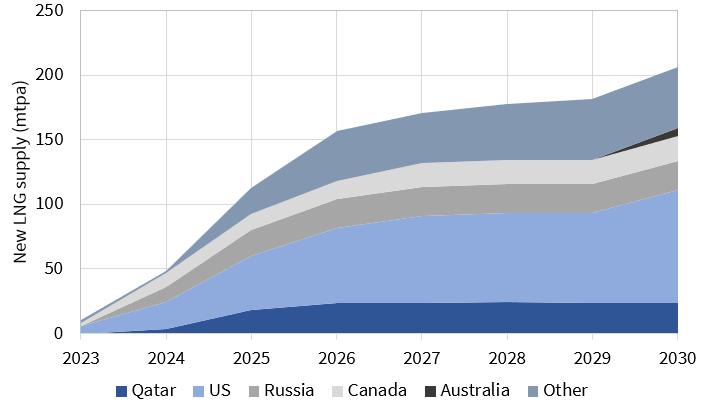 Qatar is currently the world’s largest LNG supplier. A relatively low feedgas cost base means it is best placed to participate in the next wave, albeit with volume constraints.

The North Field supplying feedgas to current trains has been under a moratorium (self-imposed in 2005) preventing further development until a technical assessment of impact on the rapid rise in output on the reservoir was completed.  Most recently Qatar has announced it intends to expand its output from 77 mptpa to 100 mtpa by building 3 new trains (assumed 8 mtpa each).  A further debottlenecking project could also add an additional 7 mtpa at low cost (a future possibility should not be discounted). The 3 new trains are likely to come onstream in 2024-25.  We set out more detail on new Qatari supply here.

As long as Henry Hub remains around current levels (~ 3 $/mmbtu), a new wave of US export projects looks likely over the next few years.  Key prospects for the next wave include:

The Sakhalin project on Russia’s eastern seaboard has operated successfully with Shell as a major partner since 2009.  More recently Novatek has, against all expectations, successfully commissioned the first of three trains at Yamal LNG on the Yamal peninsula of northern West Siberia.  The second and third trains are expected to come onstream in September 2018 and January 2019 respectively.  Novatek will proceed with a small Train 4 (0.9 mtpa) to test a novel ‘arctic cascade’ liquefaction process which, if successful, will be used in later trains. Start-up of Train 4 is scheduled for end 2019.

Novatek is then planning to proceed with a second project ‘Arctic LNG 2’ with three trains of 6.1 mtpa each, starting in end 2023 onwards. Sakhalin 2 expansion is also an even money bet, which would result in an additional train of 5.4 mtpa from around 2024.

Canada was anticipated to be a big next wave player a few years ago.  But Canadian projects now face major challenges in the form of overly complex regulatory/fiscal hurdles, cost base (particularly labour availability) and a waning Asian buyer interest in oil indexed long-term contracts. Two projects currently remain as ‘live’ prospects for nearer term FID:

No other LNG export projects are approaching maturity at present.

Icthys & Prelude projects are due to be commissioned in 2018. No other new LNG export projects are approaching FID at present. Woodside’s large Browse project was shelved in 2015/16, but resurrected in 2017 and is a possibility for FID in the early 2020s.  There are a range of other projects which could come online the late 2020s/early 2030s, most of these brownfield extensions.  Given Australia’s poor recent track record of project slippage and cost overruns, both buyers and investors are likely to be wary.

What about the others?

While these top 5 producers are likely to dominate the next wave, a number of other producing countries are also likely to contribute. If market consensus on Henry Hub is wrong and prices recover towards (or above) 4 $/mmbtu, then countries in East Africa & South-East Asia may step up to displace US export projects.

We’ll return next week with a summary of the ‘second tier’ competitors.