The luxury of oversupply

There has been a structural oversupply of capacity in North West European power markets this decade (with the notable exception of the UK). Excess capacity has been the result of slower than expected demand growth.  This has been exacerbated by an overbuild of thermal assets, particularly new coal and CCGT plants in Germany and the Netherlands.

The NW European power market balance is set to substantially change across the next 5-7 year due to:

The NW European power market balance is set to substantially change across the next 5-7 year due to: 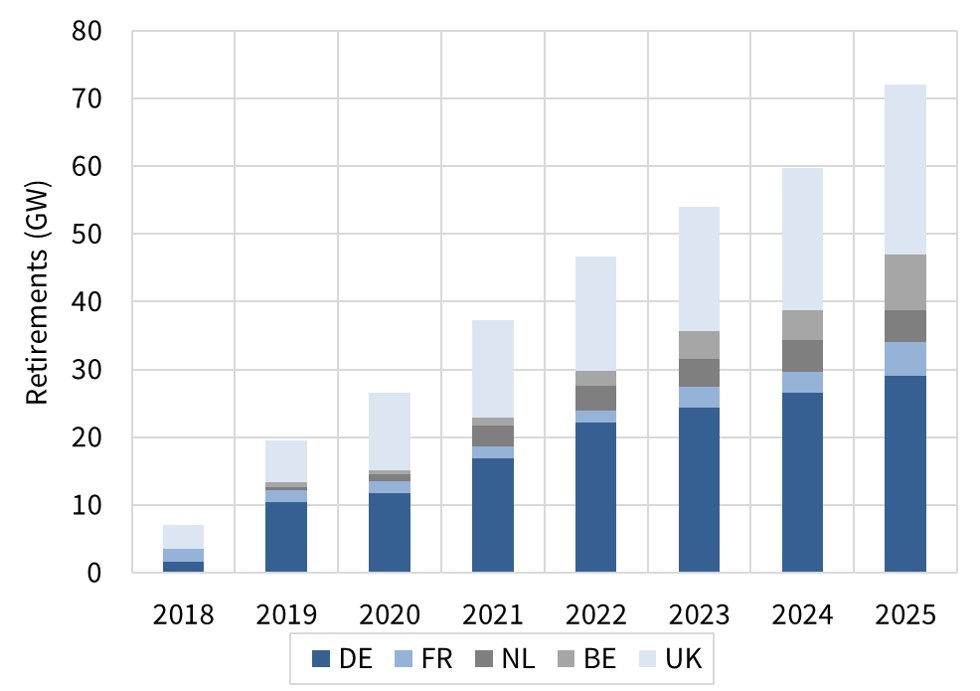 These closures will significantly tighten the NW European capacity balance as well as removing substantial volumes of dispatchable flexible capacity.

Policy makers are not blind to this challenge. In February the EU approved a further 6 capacity payment mechanisms (DE, BE, IT, FR, PL & GR).  But despite new policy measures there is not yet a compelling investment case to support delivery of new flexible capacity (UK aside).

The requirement for new capacity is clear from a security of supply perspective. But the price signals that will support capacity investment are less clear.

Necessity is the mother of intervention.  The UK power market tightened over the first half of this decade as thermal capacity retired. As a result the UK implemented a capacity market that has delivered significant volumes of new flexible capacity.

Capacity investment has been underpinned by 4 year ahead auctions of up to 15 year capacity agreements for new builds i.e. a clear capacity price signal that supports commitment of capital. This approach has not been replicated in other NW European markets.

French security of supply is underpinned by its 63GW nuclear fleet.  Despite political rhetoric, there is unlikely to be substantial net closures of French nuclear capacity before 2030. Nuclear is complimented by significant hydro flex and high levels of interconnection. Flexible capacity retirement volumes are likely to be relatively low over the next decade and will predominantly be replaced by a ramp up in renewable capacity.

The French implemented a supplier obligation based capacity market in 2017, with annual capacity payments.  In practice this mechanism is likely to be more focused on retaining existing capacity than supporting structural investment in new flexibility.  However the French government have provided specific support for new thermal capacity (a CCGT project to alleviate constraints in Brittany) and the newly approved French demand response mechanism may flush out some DSR flex.

Belgium is a step closer to the UK in terms of market tightness.  But it is a relatively small market which is very well interconnected (6GW of links with FR & NL).  Belgium’s major issue is replacement of 6GW of ageing nuclear capacity between 2022-25.  The government and TSO are aiming to do this without a step change in dependency on imported power.

The EU state aid commission approved a Belgian strategic reserve mechanism in Feb 2018.  This is focused on an emergency reserve to retain ageing thermal units (that would otherwise close).  It may also help some smaller distributed capacity, but it is unlikely to structurally solve the nuclear replacement issue.  That suggests that wholesale prices and volatility are set to rise.

Thermal capacity overbuild has been most acute in the Netherlands.  The first half of this decade saw an almost masochistic competitive battle between utilities and independent developers to deliver new capacity volume at the expense of margins.  This wounded thermal plant owners, but excess capacity has dampened security of supply concerns for the Dutch government.

The Netherlands has a relatively young and flexible thermal fleet dominated by CCGTs.  Ongoing proactive support for renewables is set to fill most of the capacity gap from retiring plants.  This means that intermittency will play a more important role in the Dutch supply stack going forward.  But capacity developers will need to look to the wholesale market for investment price signals.

Germany anchors the network of NW European power markets. German thermal capacity dominates regional price setting.  Swings in renewable output are also increasingly drawing on regional flexibility, as Germany moves towards its target of a 65% renewable energy share by 2030. The challenge Germany faces is being exacerbated by substantial closures of thermal capacity.

After the Fukushima disaster, Germany decided to close its remaining 12GW of nuclear capacity.  We are sceptical of the closure logic from an emissions perspective. But the German government is effectively implementing the plan, with 9.4GW of remaining capacity to close by 2022.

Germany is also likely to close an estimated 10GW of coal and lignite units by 2025. This includes 2.7GW of lignite units currently ring-fenced in a climate reserve.  It also covers a number of older coal units that breach IED NOx limits. IED driven closures of coal & lignite may rise to 20GW by 2030, although volume uncertainty remains given potential capex spend to mitigate emissions on some units.

Germany also has an ageing gas plant fleet.  CCGTs typically require major lifetime renewal capex to avoid closure at around the 25 year mark (although exact timing is dependent on run hours, technology configuration and operational patterns).  Another 10GW of gas-fired units will reach this point by mid next decade, likely resulting in substantial gas plant closures.

Given the scale of thermal closures, Germany faces a structurally different problem to other markets such as France and the Netherlands.  German capacity maths does not add up without substantial investment in new flexible capacity. The strategic reserve mechanism that has just been approved by the EU does not appear to solve this problem.

Implementation of the strategic reserve is planned for 2019.  The reserve allows payments to existing thermal units that would otherwise close, but support is capped at 2GW of capacity.  This compares to 10.4GW of capacity contracted for Winter 17-18 under the current network reserve mechanism (although the reserve requirement will fall next winter once the German-Austria market split is implemented).

The reserve measures Germany has pursued to date are focused on retaining existing capacity, not delivering investment in new flexibility i.e. slowing exit rather than increasing new entry.  That points to Germany also heading down the path of sharper wholesale market and balancing services price signals. This may support a recovery in the value of existing flexible power assets.  It also pushes market price risk onto investors in new flexible capacity, who will need to see a path to higher expected returns in order to deploy capital.