The Panama Canal is synonymous with the global shipping industry, facilitating over 14000 transits per year. But currently it is not a significant feature of t

The Panama Canal is synonymous with the global shipping industry, facilitating over 14000 transits per year.  But currently it is not a significant feature of the global LNG market.  This is because only 21 of the 370 LNG vessels currently in service can pass through the canal.  However the Panama Canal expansion project will allow over 80% of LNG vessels to pass through from late 2015 when it is due to be completed.

When the $5.25b project was approved in 2006, the consensus view was for a limited impact on global LNG trade.  The key beneficiary of the expansion was expected to be the owners of Trinidad and Tobago cargoes, given canal transit significantly shortens the trip to Asia.

But the rapid development of plans to build large volumes of LNG export capacity on the US Gulf Coast means that the canal expansion project is set to have a far greater impact on the LNG market than previously envisaged.  In addition, it may increase the competitiveness of lower volume existing trade routes (e.g. Trinidad to Chile) or open up new ones (Peru to Europe).  Panama is also looking to start importing LNG in 2013.

The impact of the canal expansion on LNG trade is fairly obvious: shorter distances and voyages, lower shipping costs.  The differences in shipping times are summarized in Table 1.

Shorter distances reduce fuel consumption and LNG boil-off.  Shorter voyages reduce the charter period for spot voyages and increase vessel utilisation. The scale of the difference in shipping cost of a Panama vs Suez canal transit for Gulf Coast exports is illustrated in Chart 1. 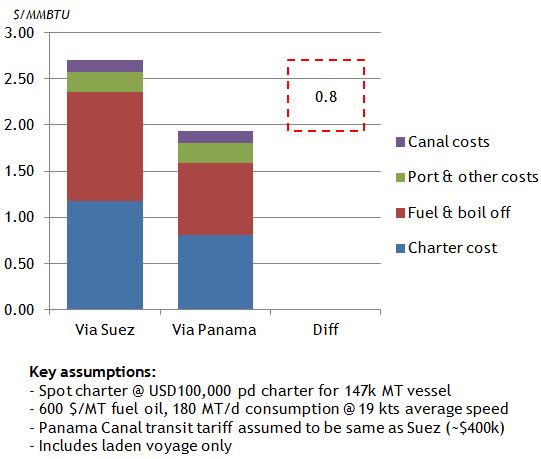 There are two important assumptions applied in estimating the shipping cost differential:

On this basis the estimated cost saving of transit from the US Gulf Coast to Japan is in the region of 0.8 $/mmbtu.  A more precise cost savings estimate will be possible once the new Panama transit tariffs are published.  The Panama Canal Authority is currently consulting with customers and expects to publish tariffs in mid 2014.  There has been concern the tariff may be significantly higher than the Suez equivalent (approx ~$400k), with estimates ranging up to $2m per round trip.

However, the direct canal transit costs are only a relatively small portion of the actual shipping costs.  As a rule of thumb, each $100k of canal transit cost will increase the cost of shipping Gulf Coast exports to Asia by around 0.03 $/MMBTU.  So while a high transit fee would reduce the Panama versus Suez cost differential, it would not erode it altogether.

The other important factor in the shipping cost estimate is accounting for the cost for the unladen (or ballast voyage), see here for further background on this.

The importance of the Panama expansion from an LNG market perspective is its influence on global gas price differentials.  Lower shipping costs improve the relative economics of shipping US gas to Asia.  Over time this should act to reduce inter-regional price spreads.  The Panama expansion is also likely to bring down the price of spot deliveries to the Latin America pacific cost (Altamira in Mexico and Quintero Bay in Chile).

Reduced journey times to Asia will also have a second order impact marginally increasing supply chain flexibility.   This will allow US exporters to respond more quickly to short term fundamental shocks which may act to dampen volatility of prices for short term delivery.

But perhaps most importantly, reduced shipping costs will increase the competitiveness of two very flexible sources of LNG supply, exports from the US and Trinidad & Tobago.  The flow of gas from these exporters will be strongly influenced by the spread between the Henry Hub price and Asian spot price signals.  The Panama expansion will therefore likely play its part in increasing the influence of the Henry Hub price on Asian LNG price signals.