The pace of price convergence across European gas hubs over the last 5 years has been one of the great success stories of an integrated European gas market.  Price signals from the more liquid Northern European hubs (NBP, TTF and NCG) are increasingly penetrating into Southern Europe as transport capacity access improves.  But the PEG Sud hub in the South of France has taken a path of its own over the last 18 months, as the global LNG market has trumped price signals from Northern Europe.

Despite regulatory ambitions to evolve to a single French gas hub, France is for all practical purposes two gas markets.  The PEG Nord hub is well interconnected with North West Europe and forward prices have converged to reflect this.  There are however three factors that can contribute towards price separation in Southern France:

The French gas hubs and infrastructure are illustrated in Chart 1. 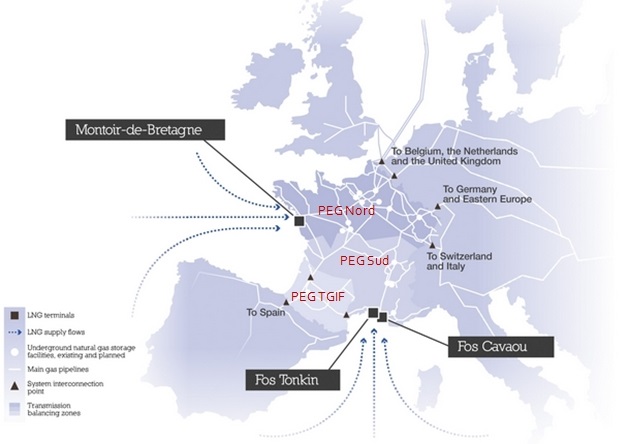 The south of France is much more dependent on LNG imports than the north.  The structural Asian LNG spot price differential post Fukushima has resulted in large volumes of French LNG supply being diverted (or reloaded) and sold to Asian buyers.

The diversion of LNG supply has left a deficit of gas in Southern France that needs to be met via imports from the North.  This has been exacerbated by Spanish demand across the France- Spain interconnector, with Spanish gas prices typically higher than France, particularly as large volumes of Spanish LNG have also been diverted to Asia.  Constraints in the ability to transport gas from the more liquid PEG Nord to its southern cousin PEG Sud (via the North South link) have lead to some interesting periods of price divergence as shown in Chart 2.

Source: CRE based data from Heren and Bloomberg

These periods of PEG Nord vs PEG Sud price divergence have been more pronounced over the spring/summer of 2012 and 2013, with the price spread closing over winter 2012/13. This has been due to several factors:

What does the future hold?

CRE (the French regulator) has shown clear concern over price divergence across French hubs.  CRE has run an industry consultation on the causes and implications of the price decoupling over 2012-13.  The CRE review highlighted issues around transparency and availability of short term capacity, definitely factors which are within its remit to improve.  But as long as a structural LNG spot premium pulls gas away from France, physical transmission constraints on the North-South link may continue to drive price divergence.

One of CRE’s responses has been to push for a single balancing region across France (targeted for 2018).  But this aim somewhat misses the point.  A single balancing region and price would mask the true cost of the North-South transportation constraint by removing the ability for prices in the south to decouple from the north.  It is this price separation that is providing an important incentive for players to optimise portfolio gas flows in response.  A single balancing zone would leave the flow optimisation activities to the system operator (with any costs likely to be smeared across market participants).

A single hub in France is an admirable long term ambition, but it is the underlying transmission constraints that need to be addressed first.  Upgrades on the France-Spain interconnector in 2013 and 2015 are likely to add to price pressure in the south of France, as greater volumes flow to Spain.  This may set up an interesting pricing dynamic where Spanish gas prices are increasingly influenced by pricing in France, but at the same time are contributing to hub price divergence across France.  In this situation, volatility across French hub price signals may be a key factor supporting the value of gas supply portfolio flexibility within France.