We look at the drivers behind substantial price divergences which are opening up across European gas hubs e.g. a more than 30 €/MWh discount of NBP to TTF.

Across the last month front month UK NBP gas prices have plunged to a more than 30 €/MWh discount to TTF. These neighbouring hubs typically trade within a tight 1-2 €/MWh range.

This rapid price divergence from TTF is not limited to the UK. The Spanish PVB hub has opened a more than 20 €/MWh discount to TTF. France’s PEG hub more than 10 €/MWh.

Today we look at how Europe’s pivot from Russian gas to LNG is behind this sudden breakdown in hub price correlations.

We have recently set out the impacts of a market regime shift in the global gas market as the Russian invasion of Ukraine precipitates a European pivot towards LNG.

A surge in European appetite for LNG is driving substantial price divergence across European gas hubs given a sudden shift in gas import flows from Russia in the east, to LNG in the west.

What is the common factor pushing the UK, Spanish & French hubs to a discount vs TTF? Better access to LNG regas capacity.

Unprecedented levels of LNG imports into Europe in 2022 have seen import constraints emerge across NW Europe. These constraints have seen NW European DES spot prices for LNG cargoes on the water plunge to significant discounts to TTF as market participants fight for regas capacity to deliver the gas.

Let’s take the UK as a case study. The UK’s limited storage capacity & its location at the far Western edge of Europe’s interconnected gas market, has seen development of relatively high volumes of LNG import capacity across the Grain, Dragon & South Hook terminals.

Chart 1 shows net flows through the UK’s two gas interconnectors to the Continent (BBL to Netherlands and IUK to Belgium). The UK is typically a net importer of gas across winter into spring. However net flows have been strongly in an export direction in 2022, with export flows across much of April constrained at maximum available flow.

NBP prices as a basis to TTF are normally based upon relative supply and demand balance and the costs of flowing gas from one hub to the other. Periods of strong and constrained exports in 2022 (compounded by BBL reverse capacity being unavailable) have pushed NBP prices sharply below TTF as shown in Chart 2. 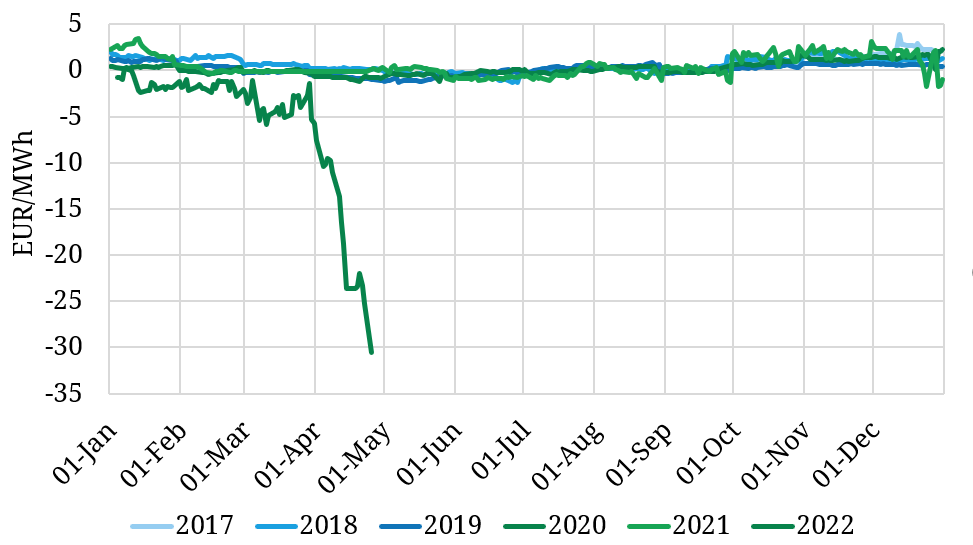 The NBP vs TTF price spread has dislocated from its historical range in April given:

The combination of these factors is causing gas oversupply in the UK, particularly given limited storage capacity since the closure of the large Rough facility. Constraints in exporting gas from the UK are pushing NBP prices substantially lower relative to TTF.

Constraints on pipelines from the UK are only an example of multiple constraints across the interconnected European gas network. Other constraints currently include FR -> ES, FR -> BE,  BE -> NL, DE -> AT, DE -> PL. In many cases firm capacity sales are maxed out resulting in the use of interruptible capacity.

Tightness from the Netherlands to Russia borders

On the TTF side of these constraints there will be no relief from Groningen, where a production extension to help reduce Russian gas dependency has been rejected. The giant Dutch field will have its last normal “gas year” this year and then close.

There has been a structural shift in European gas market flow patterns in 2022 with gas moving from LNG import terminals in the west (UK, Spain, France) to countries facing reduced Russian flows, mostly in the East (e.g. Germany, Austria, Italy and the Netherlands).  This explains the substantial price premium in those markets as congestion appears.

It is one thing to secure access to an FSRU in a contract but another to bring all associated infrastructure online to alleviate flow constraints. In the meantime expect price spread divergence and volatility across European hubs to continue, with knock on impacts in power markets.

The breakdown of typical flow & hub price correlations has been driving a significant amount of client work with gas infrastructure capacity holders across Europe this year, as we support understanding of the current impact/opportunities & future implications.

We look at how Europe’s role in providing flex to the LNG market is evolving under a new market regime & what that means for pricing & portfolios.
Read more
Featured Article
28 Mar 2022

We look at 5 enduring impacts that are likely to shape European energy markets as a result of the current energy crisis.
Read more
Featured Article
21 Mar 2022

Regime shift in LNG market as Europe pivots from Russia

We look at the LNG market implications of Europe’s policy pivot away from Russian gas as well as current impact on pricing & flows.
Read more