France is in a strong position to replace retiring fossil-fired capacity with renewables. But this approach relies on maintaining its nuclear output.

We recently considered Belgium’s challenges in replacing thermal capacity with renewables.  The conclusion: the viability of this approach is risky at best, particularly given current Belgian policy mechanisms.

Today we shift our focus to the much larger French power market. In contrast to Belgium, France is in a strong position to replace retiring thermal capacity with renewables.  Existing flexibility and high volumes of interconnection support the viability of this solution.

But there is one big caveat: this approach relies on France maintaining a relatively steady nuclear share.

In this article we consider the role of French nuclear, the mechanics of the power market and how France’s capacity mix is likely to evolve over the next decade.

The dominance of nuclear power in the French capacity mix is unique.  France ramped up a vast state nuclear investment program after the 70’s oil shocks, building more than 60GW of capacity between 1977 and 2000.  This was specifically aimed at ensuring competitive and reliable energy and insulating the French economy from a dependence on imported fuels.

French politicians have recently flirted with the idea of reducing nuclear dependence. One of President Macron’s 2017 campaign pledges was to reduce nuclear’s share to 50% of generation output by 2025 (from more than 75% today).  But it took his government just 5 months to release the implications of such a promise for emissions, security of supply and electricity prices, before beating a rapid retreat.

French nuclear closure aspirations have not disappeared.  But targets are likely to remain loose and beyond an actionable policy horizon.  In other words, the policy importance of emissions reduction, security of supply and industrial competitiveness trumps nuclear closures.

The potential threat to this logic is a systemic safety issue with the nuclear fleet.  For example, safety issues resulting in temporary reactor closures in 2016-17 related to components manufactured in the same forge.

While nuclear safety is an unpredictable factor, the French state (85% owner of EDF and 90% owner of Areva) is heavily invested in preserving a nuclear future. In the analysis we set out below we work on the basis that a steady nuclear share can be maintained.  The alternative would almost certainly involve large scale deployment of new gas-fired capacity.

The French power market in a nutshell

At a simple level the France’s capacity mix can be cut into three slices that shape market operation:

Chart 1 shows a de-rated view of the current French capacity mix as well as an illustrative scenario for its evolution to 2030. 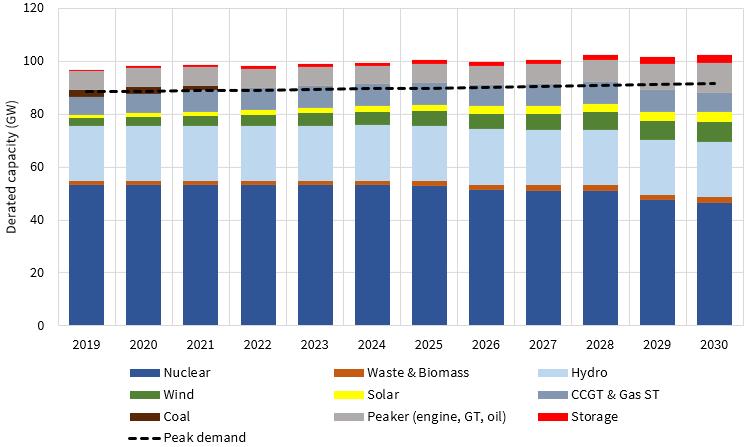 The key mechanics of the current operation of the French power market are as follows:

Over the next decade, the evolution of the French market is likely to be driven by decline in the thermal tranche of the capacity mix, offset by steady growth in the renewables tranche.  In other words replacement of coal, oil and gas capacity with wind, solar and storage. This is not only already in motion, it also appears to be the path of least political resistance.

As with all European power markets, France’s thermal power fleet is ageing. Coal plant closure has been accelerated under Macron with a complete coal exit (~3GW) targeted now for 2021. Emissions regulations will see oil-fired peaking capacity (~1GW) exiting in a similar time frame.

The retirement profile of gas-fired plants is less certain. 2017 implementation of a capacity market (clearing prices around 10 €/kW) is supportive of plant economics.  But CCGTs typically face major life extension capex around 25 years of age and there is not currently a clear price signal to facilitate this. It is reasonable to assume that France could lose 3-5 GW of gas capacity over the next decade.

Chart 2 sets out an illustrative scenario for replacement of this retiring capacity.  In contrast to Chart 1, capacity volumes are shown in nominal rather than derated terms (to allow a cleaner view of renewable roll out). 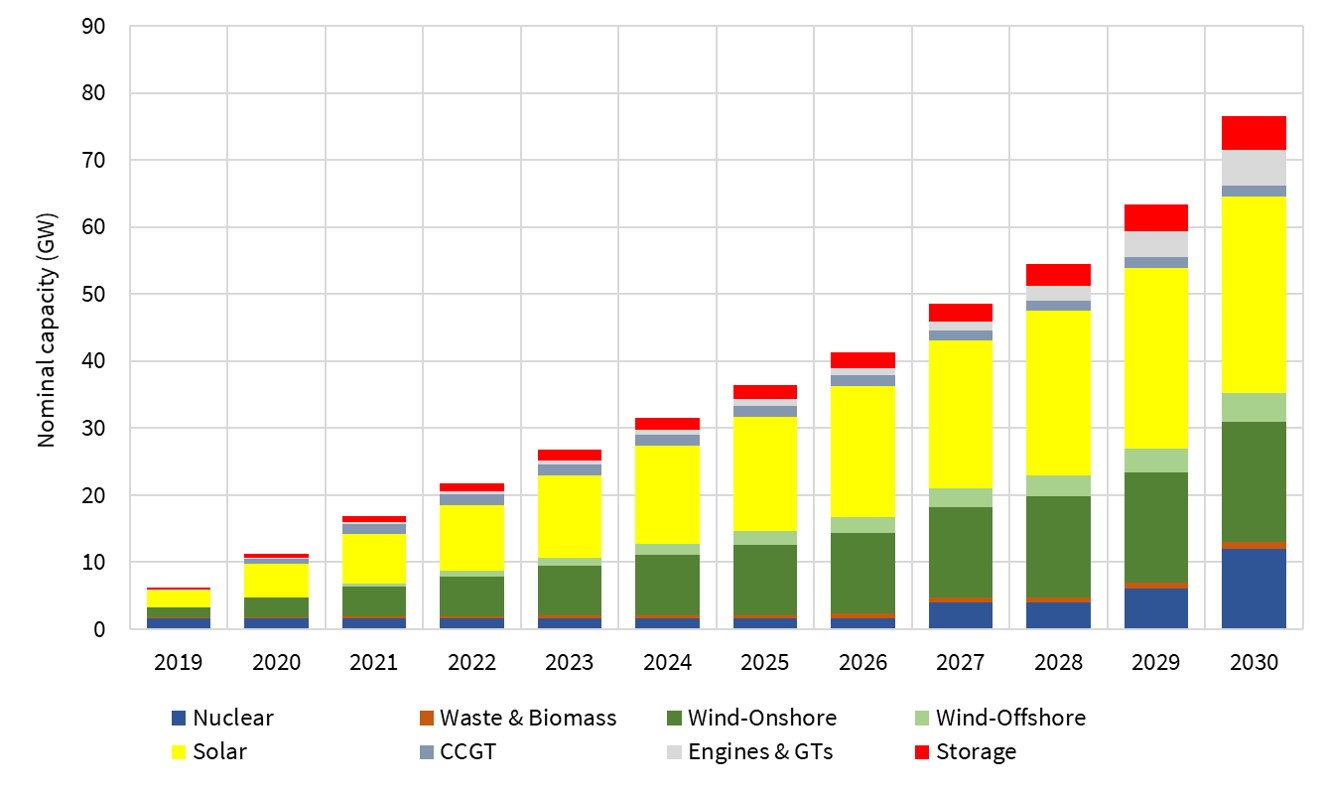 Development of new nuclear plants is back to the drawing board after the problems with the Flamanville plant (which EDF hope will be commissioned by early 2019). But we think it is reasonable to assume the modest ramp up of a ‘new wave’ of reactors from the later 2020s, allowing the older current generation of plants to retire.  If we are wrong on timing here then we expect life extensions to be managed in a way that prevents any major discontinuity in nuclear output. On a net basis we assume a gradual decline in nuclear capacity (i.e. retirements outweigh new build).

This sets up a key role for roll out of renewable capacity. In our illustrative scenario we assume by 2030 the addition of 18GW of onshore wind, 4GW offshore wind and 30GW of solar.  Under Macron, policies are falling into place to support this roll out (e.g. wind & solar capacity auctions). French energy giants EDF and Total have also both announced aggressive targets for solar capacity deployment.

That leaves the flexibility problem.  Incremental gas capacity is likely to be required through the 2020s, but in relatively low volumes (3-5GW) and with a shifting focus towards distribution connected engines.  Storage is likely to play a key role, skewed towards the later 2020s (we assume 5GW by 2030).

France also has strong potential to more efficiently manage its demand side (e.g. via smarter appliances & space heating management) to reduce peak load requirements over time.  But despite this, peak/off-peak price shape is set to increase over time. This is a function of wind and solar output pulling down offpeak prices while high variable cost peaking capacity (engines, batteries & DSR) supports peak prices.

The ultimate security of supply backstop for France is its high volume of cross border capacity (~20GW by 2020). But this may turn out to be a dangerous insurance policy (as Winter 2016-17 illustrated). France’s largest neighbour, Germany, is banking heavily on imported flexibility and there may not be enough to go round in times of system stress.  In an article to follow we will look at the much more challenging problems facing the German power market in replacing thermal capacity.