Russian & LNG imports are reinforcing loss of seasonal flex from domestic gas production, inducing a rebalancing in the European market.

German and Finnish approval of the Nordstream 2 pipeline over the last two weeks helps pave the way for Russia to continue its role as predominant gas exporter to Europe.

Russian gas will compete with LNG supply to meet growing European import demand in the 2020s.  But will Russian or LNG imports replace the seasonal flexibility that Europe is losing from maturing domestic production?

Plenty of Russian gas but seasonal profile is declining

Vast reserves in Western Siberia mean there is no imminent prospect of declining Russian gas production.  There is an estimated 100bcma+ of shut in Russian production developed as the result of overly optimistic European gas demand forecasts last decade.

Russian exports to Europe have in fact been steadily increasing since 2015. But as flow volumes have increased, the seasonal profile of Russian imports has declined.

In our last article we set out how maturing production was causing a decline in seasonal flex from the UK, Netherlands and Norway. In the case of Russia, loss of seasonal flex is driven by changing flow routes and strategy rather than upstream issues.

Gazprom has made a clear strategic decision to bypass the traditional Ukrainian flow route to the extent that capacity is available on other routes.  This strategy is set to continue given:

As part of this strategy, Russia has also substantially reduced its usage of Ukraine’s vast gas storage assets.  This has effectively eroded the provision of flex from Ukrainian storage to the European gas market.  The loss of seasonal profile from Russian flows has been reinforced by Gazprom more actively marketing uncontracted volumes at European hubs across the summer months (having overcome its previous aversion to selling at spot prices).

The reduction in the seasonal flow profile of Russian imports can be seen in Chart 1. 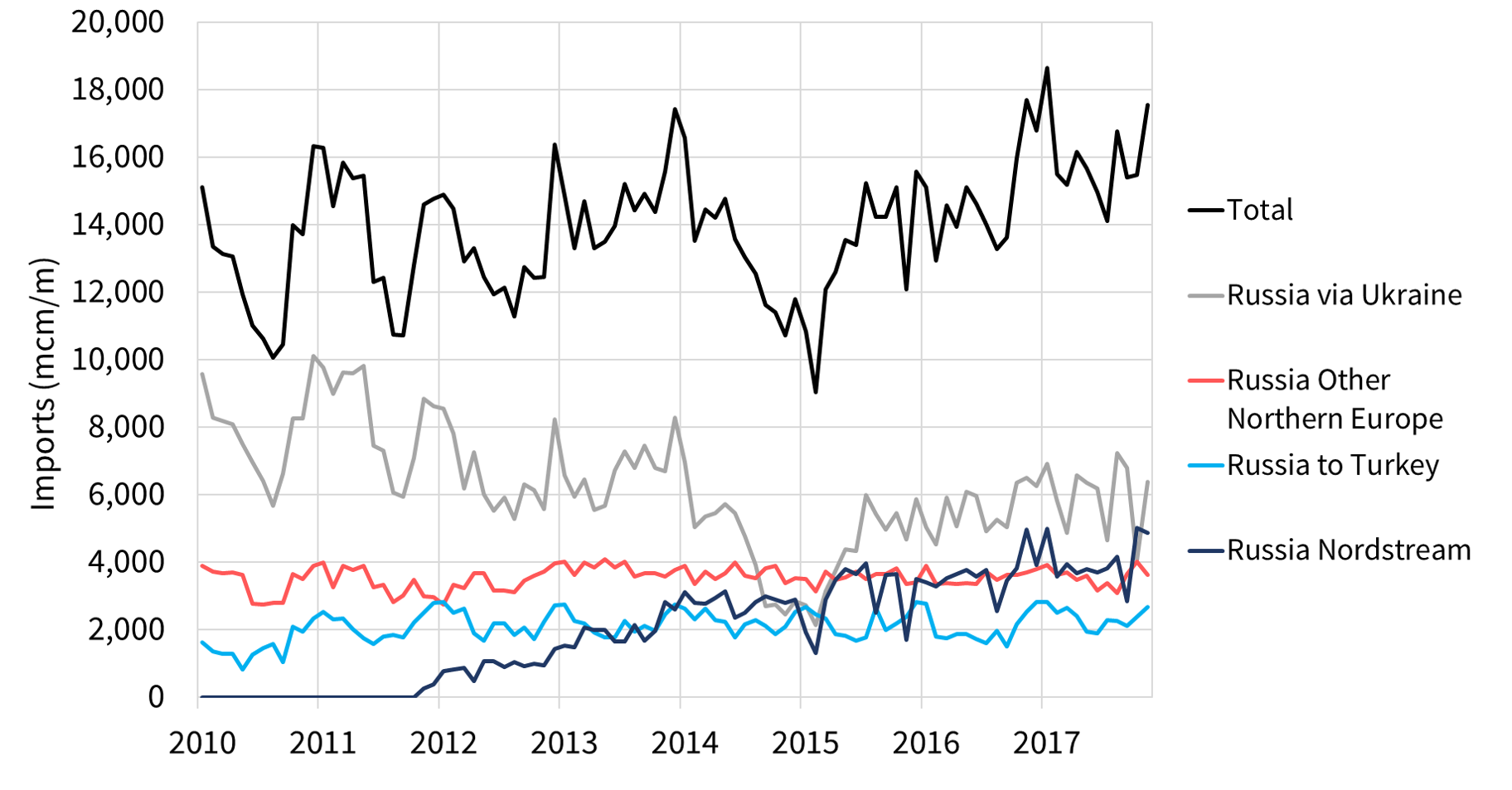 The LNG market can deliver Europe large incremental volumes of gas at the right price.  But the supply chain for LNG is more complex than for pipeline supply.  And it takes longer to respond to market price signals, typically from 2-6 weeks to deliver a material increase in volume.

There are however growing structural trends in the way LNG flows into Europe.  An increasing shortage of domestic storage in Asia (particularly in China) is causing flexible LNG cargoes to be diverted away from Europe across the winter.  This dynamic has been clear over the last two winters as Chinese LNG demand has surged.

A similar logic tends to cause surplus LNG to flow into European hubs across the summer months.  In other words, European LNG imports are increasingly displaying a counter-seasonal profile which is compounding the loss of seasonal shape from domestic production.

In our last article we set out why Europe faces an unambiguous decline in seasonality from domestic production.  The earthquake induced pace of reductions in Groningen production, now targeted to cease production by 2030, is accelerating this dynamic.

In today’s article we have explained why structural trends driving Russian and LNG import profiles are also reducing the seasonal shape of flows into Europe.

For the last decade the European gas market has experienced an oversupply of seasonal gas flexibility.  This was the result of weaker than expected gas demand, overbuild of storage and improved optimisation of existing portfolio flexibility.

However investment in seasonal flexibility has dried up at the same time structural trends are eroding existing seasonal flex.  Over the last five years, seasonal price spreads at European hubs have been crushed towards the variable cost of cycling seasonal storage assets (1.0-1.5 €/MWh). It may be complacent to assume that spreads remain at this level for the next five years.