We look at 5 factors that suggest a decarbonisation tipping point may be near and set out why this is important for European gas & power markets.

‘tipping point’: the point at which a series of small changes or incidents becomes significant enough to cause a larger, more important change.

Carbon dioxide concentration in the earth’s atmosphere has risen 40% since the industrial revolution. Half of that increase has occurred since 1980. And global carbon emissions continue to steadily rise.

There is clear scientific evidence of the link between rising carbon dioxide levels in the atmosphere and increasing average air & sea temperatures (see Chart 1). There is also growing evidence of feedback loops (e.g. melting sea ice) and accelerating changes in climate patterns, although these are more difficult to measure.

Scientific evidence is increasingly pointing to the fact that we are past the tipping point with respect to climate change.

The geopolitical implications of climate change are also coming into sharper focus. For example, the risks of large scale population displacement, decreasing availability of water & arable land and growing conflict for resources.  This increases the incentives for action.

So are we also reaching a tipping point in terms of a decarbonisation response?

This is the first in a series of two articles on a decarbonisation tipping point. Today we set out 5 drivers that suggest a tipping point could be upon us. Then in a second article we will look at the impact of more rapid decarbonisation on energy companies & portfolios. 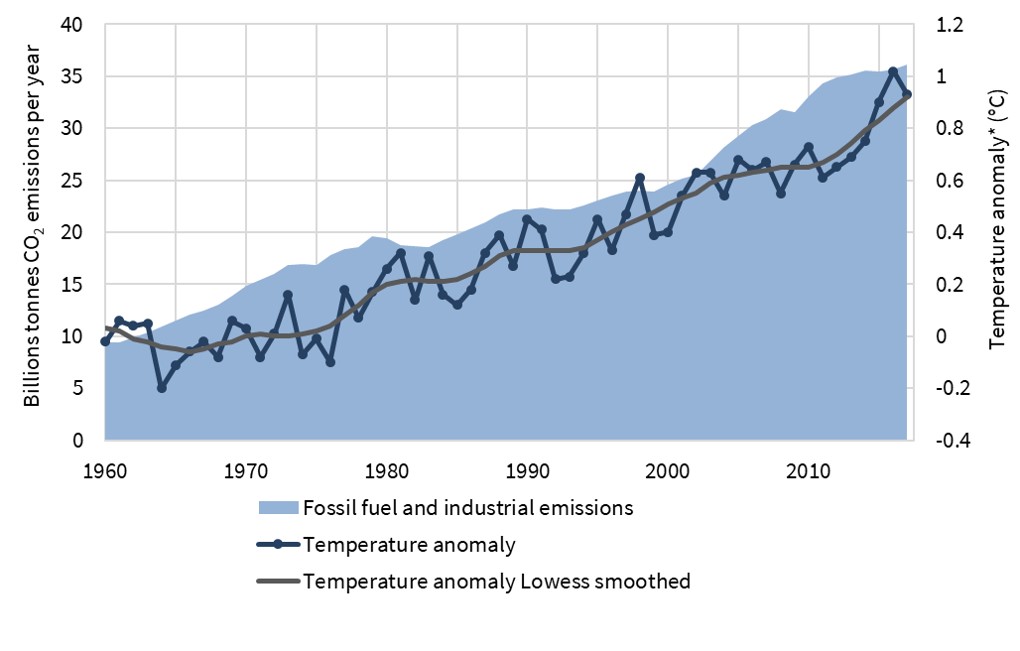 5 drivers that suggest a decarbonisation tipping point is near

Global carbon emissions rose 2% in 2018, the fastest pace for 7 years. This is despite plunging costs & rising volumes of renewable energy. The simple reason is that action on decarbonisation is being outpaced by emissions growth from rising energy consumption caused by population & economic growth.

The global population is increasing by about 1 million people every 4 days. Think of a mid-sized new city of energy demand created each week (as well as the other resources required to develop & support it).

In addition to population growth, economic growth in developing nations is increasing energy consumption of the existing population.  For example, 88% of the Chinese population lived below the poverty line in 1980 compared to less than 1% in today’s urbanised China. Energy consumption at the margin is still predominantly supported by fossil fuels.

The challenges of emissions reduction have seen the problem largely kicked down the road over the last 20 years. But scientific evidence is increasingly pointing to a window for action over the next 10 years in order to avoid more severe climate disruption. Discount factors are no longer enough to shrink the problem into the future.

Austerity is dead. Long live Modern Monetary Theory (MMT).  There is growing momentum on both sides of politics to abandon austerity for fiscal expansion. Economists as well as politicians are swinging behind fiscal spending, led by central bankers who are confronted by the limits of monetary policy in propping up economic growth.

The basic premise of MMT is that in a low inflation environment, deficits don’t matter so long as a country can print money in its own currency. Modern Monetary Madness? Maybe… but in a world struggling against powerful demographic & technology driven disinflationary forces, MMT is a seductive economic narrative to justify political spending.

Countries with this ability to monetise their own debt (e.g. US, Europe, Japan, China) look increasingly likely to embark on large fiscal spending programs. Decarbonisation is an obvious spending target, as evidenced by the rise of the ‘Green New Deal’ in the US.

The costs of large scale decarbonisation are also falling with rapidly declining borrowing costs. Interest rates on government & corporate debt have plunged in 2019, continuing a 40 year downtrend. There is now more than $15 trillion of negatively yielding debt worldwide (i.e. lenders paying borrowers to take their money away). The combination of targeted fiscal spending & low rates may create powerful tailwinds for decarbonisation.

There has been a subtle but important shift of big companies behind decarbonisation over the last 2-3 years. This is in part in response to the rising importance of climate change to customers.  Global giants such as Google, Microsoft and Unilever are decarbonising their business models at a much faster pace than policy requires. Many large companies have now set (or already achieved) 100% electricity decarbonisation targets and are looking to expand on these.

This trend of business support for decarbonisation helps smooth the way for more aggressive policy action.

Greta Thunberg, a 15 year old Swedish girl, started a one person ‘climate strike’ in August 2018. A little over a year later she was favourite to win the Nobel Peace Prize going into the ceremony last week (although it went to the Ethiopian PM) . What makes her impact larger than the many other people who have tried similar protests over the last 20 years? Timing would appear to be an important factor.

Whatever you think of Greta’s political influences, she symbolises the rapid mobilisation of a generation in a way not seen since at least the 1960s. 2019 has seen large youth climate protests on an almost daily basis, involving millions of people from a broad range of countries, wealth levels and political backgrounds.

This organic climate movement is hard to pin down. It seems to capture a complex (and sometimes inconsistent) mix of issues, politics & proposed solutions.  But there is one common theme that binds the movement together: a demand for climate action now.

The Democrats are now odds on favourites to win the White House in 2020. Trump’s odds of winning are slipping with the fortunes of his ‘greatest economy in history’ (he is now 11/8 to win a second term).

It is unclear which of the Democrat candidates will take on Trump. But fiscal expansion to support the Green New Deal is a prominent policy goal for all of the leading Democrats. A Democrat in the White House could see the full force of US innovation thrown behind decarbonisation.

Even in the absence of a Democrat President, there has been growing decarbonisation momentum at a state level. 16 states have now committed to 100% renewable or 100% carbon free targets by 2050.  California (the 6th largest economy in the world) is playing a particularly important role in implementing policy change.

Clear US leadership on decarbonisation over the next five years would likely precipitate a rapid acceleration of the global response.

What does this mean for European energy?

We have become used to a relatively slow rate of progress on decarbonisation over the last 20 years. That could of course continue. There is still considerable inertia acting against rapid change.

But the five factors above are increasing the probability of a step change in decarbonisation response across the next 5-10 years.

Current trends point to this response being led by:

That means European power & gas markets are likely to be at the epicentre of global change. They are the low hanging fruit.

We consider the implications of accelerated decarbonisation on energy companies & portfolios in the next article.