“Germany’s climate targets are incompatible with its coal closure timeline”

The German coal phase out challenge

“Germany’s climate targets are incompatible with its coal closure timeline”

The German coal phase out challenge

Germany has led European renewable investment across the last decade, transforming its power sector. But a large coal & lignite fleet have been an uncomfortable Achilles heel in the German decarbonisation plan.

The future of German coal is rapidly coming to a head. Decarbonisation momentum in Germany is accelerating, as a pillar of the Covid economic recovery plan and with broad based political support.

The simple fact is that Germany’s new 2030 emissions targets are inconsistent with its coal fleet closure timeline. In this article we set out why and what it may mean for the German power market.

German courts made headlines in Apr 2021, after declaring Germany’s emissions reduction policy was insufficient and violated constitutional rights.  Rather than fight the ruling, Germany quickly passed new emission reduction legislation mandating a new set of long term emission targets. These new laws included raising the bar to a 65% cut by 2030 (vs 1990), compared to 55% previously.

In effect, the new legislation reduces maximum 2030 power sector emissions from ~180MT to only 110MT, as shown in Chart 1. 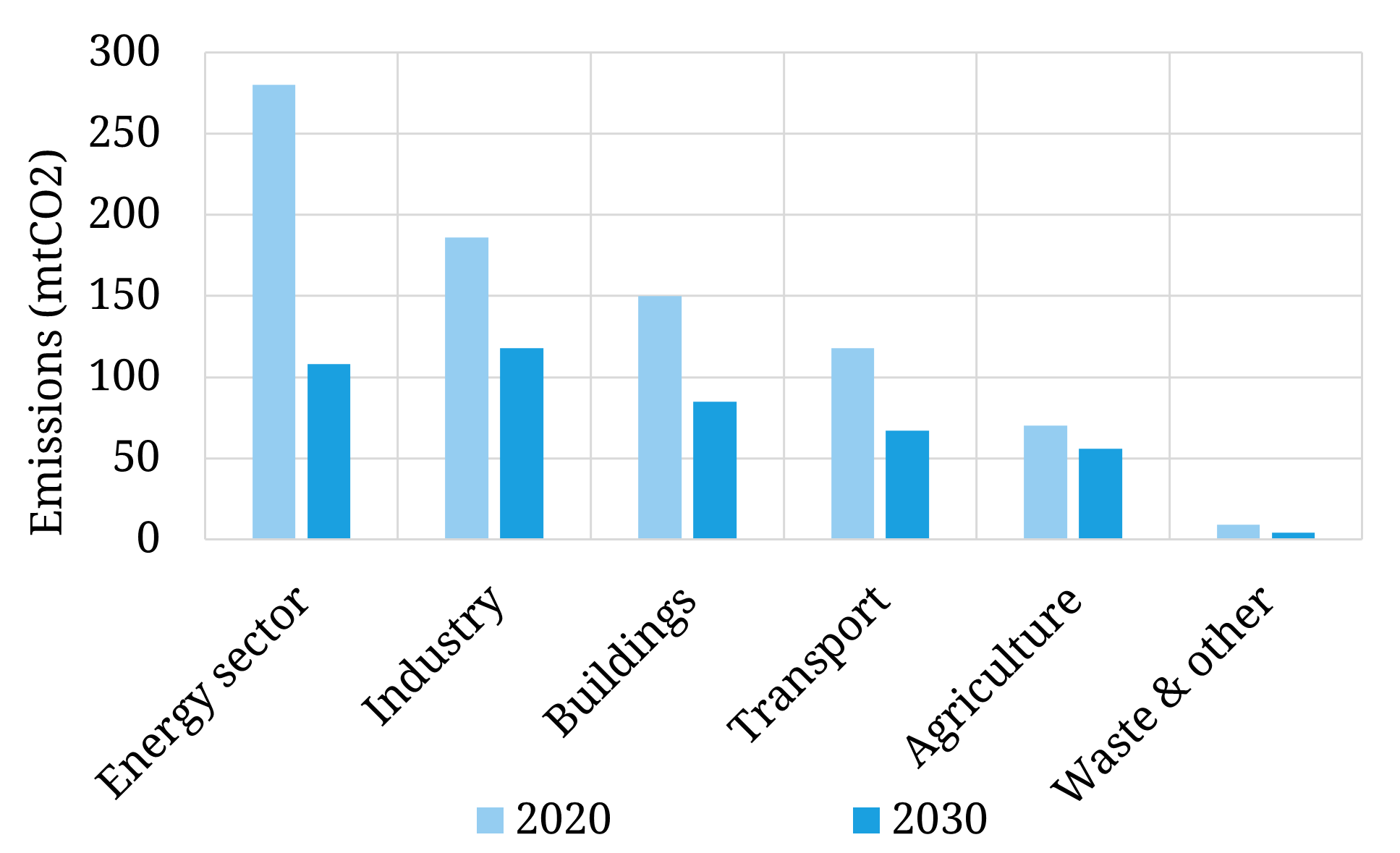 Despite this significant reduction in maximum power sector emissions, German coal & lignite capacity is still projected to be at 17GW by 2030 under current coal phase out laws.

In order to reach the new emissions targets, German policy makers are projecting huge increase in renewable penetration, rising to 65% of gross demand by 2030.  This represents accelerated investment in a combination of on and off-shore wind and solar PV.

However renewables rollout falls well short of the capacity & energy reductions resulting from the closure of Germany’s nuclear & coal fleets.

Analysis of Germany’s climate targets reveals a striking inconsistency between its gradual coal phase out plans and rapid decarbonisation targets.

Whilst coal and lignite will remain an important part of the German energy mix this decade, the new emission targets significantly limit the scope of the coal fleet to provide energy up to and beyond 2030. We set out below why Germany may need to close its entire coal & lignite fleet by 2030 to meet its new emissions targets.

To put this in context, Chart 2 shows the incremental capacity deficit that a 2030 fleet closure implies versus the government’s current timeline. 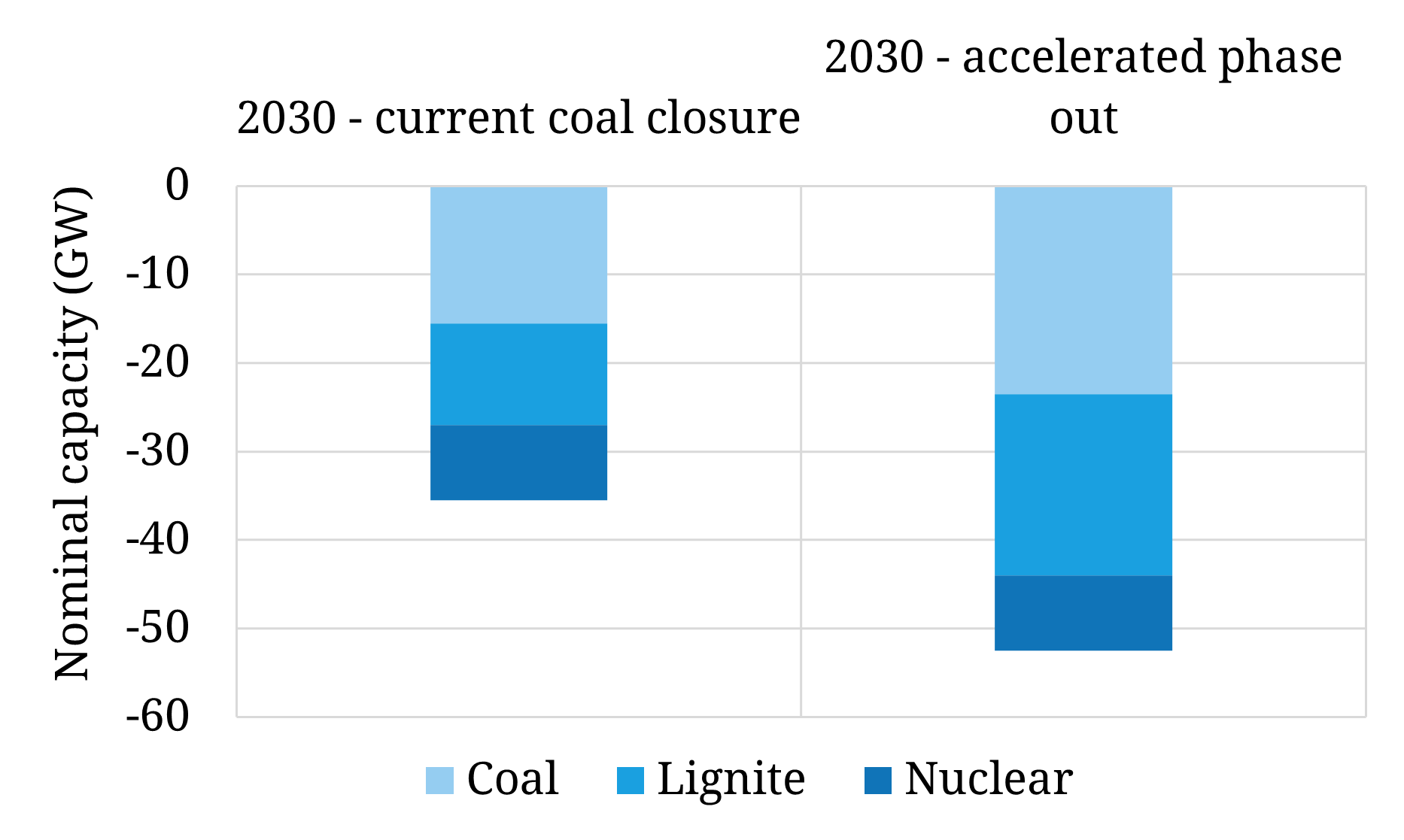 Let’s consider a conservative (optimistic) scenario where Germany (i) meets its 65% renewable generation target by 2030 and (ii) experiences very low power demand growth (650TWh / year in 2030) despite electrification of other sectors. In this case Germany will still require over 220TWh per year of incremental power from non-renewable sources by 2030.

In parallel to decarbonising the power sector, Germany is also closing the final 8GW of its nuclear capacity next year, almost 10 years ahead of its safe operating lifespan. Assuming a conservative 75% load-factor, the early closure of the nuclear fleet increases the 2030 requirement for incremental power by 50TWh per year.

So what can plug this gap? Germany is effectively left with natural gas, coal & imports. Storage will play a key flexibility role in balancing the system, but it represents a net consumer of energy and does not help to plug an energy deficit.  Hydrogen even under the most optimistic scenarios will have little impact by 2030.

Even if the currently planned 17GW of remaining coal and lignite plants in 2030 run at very low load factors (e.g. less than 20%) and residual thermal generation is met with high efficiency gas CCGTs, Germany would breach its 2030 carbon budget.

In the absence of a strong capacity price signal, German coal or lignite plants are not economic at such low load factors. Regardless of regulatory schedules, owners will likely close assets to stem losses.

Relax our conservative 650 TWh per year demand assumption in 2030 and the challenge gets much larger. Electrification of transport, heat & industry will likely drive power demand significantly above this level. If that is the case, the entire German coal and lignite fleet may need to close by 2030 to meet the new binding emissions targets.

In summary, Germany’s climate targets are incompatible with its coal closure timeline. It will take a substantially accelerated closures for Germany to meet its new 2030 emissions targets.  And this acceleration will exacerbate Germany’s growing energy & capacity deficit this decade.

In next week’s article we put some numbers around the scale of these deficits and look at the implications for new flexible capacity investment required to plug the gap.

Coal making a comeback in Germany

We look at the EU’s push to implement carbon border pricing and the potential implications for European energy markets.
Read more