The German policy narrative is for renewables growth to offset the closure of nuclear, coal & lignite capacity…. but the numbers tell a different story.

In our 1st article on our new website & blog, we set out the numbers behind a looming capacity crunch in the German power market and consider the impact.

The German policy narrative is for renewables growth to offset the closure of nuclear, coal & lignite capacity…. but the numbers tell a different story.

The German Energiewende has supported impressive growth in renewables since its inception. Wind and solar now accounts for 47% of German capacity. A renewed policy emphasis on renewables means this percentage is set to increase significantly over the new few years, with new targets of 98GW of solar, 20GW of offshore wind and 73GW of onshore wind by 2030.

Set against this growth in intermittent generation is a rapid reduction in installed firm capacity. 16GW of nuclear, coal and lignite closures are scheduled by the end of 2022, 29GW by 2030.

The German policy narrative is for renewables growth to offset the closure of nuclear, coal & lignite capacity… but the numbers tell a different story. In this article we examine the net effect of these two contrasting capacity changes and set out why we see a looming capacity crunch.

The supply deficit in numbers

In 2019 the German coal commission provided recommendations to phase out Germany’s coal and lignite capacity by 2038, starting in 2022. These recommendations have now been drafted into a proposed law released last week. This will formalise the pathway to zero-coal.

In addition to coal closures, Germany will also close its remaining nuclear fleet by 2022 as part of the Energiewende. 12GW of nuclear capacity has been closed under this policy already, with coal generation making up the shortfall. The remaining 8GW of nuclear is due to close in 2022, but with coal capacity also closing, the current policy intention is for renewables to plug the gap.

Both coal and nuclear closures are dictated by legislation. This significantly reduces uncertainty around closure volumes & timelines.

Projecting renewables growth is inherently more risky and subject to investor sentiment. However, for simplicity we assume Germany meets its aggressive new wind and solar targets in the following analysis (i.e. we show an optimistic view of renewable build).

On the renewables front, the latest 2030 targets are for an additional 48GW of solar and 33GW of wind capacity by 2030, totalling 81GW combined capacity.  As Chart 1 shows, on a net capacity basis, that renewable installations clearly outpace closures, so what is the problem? 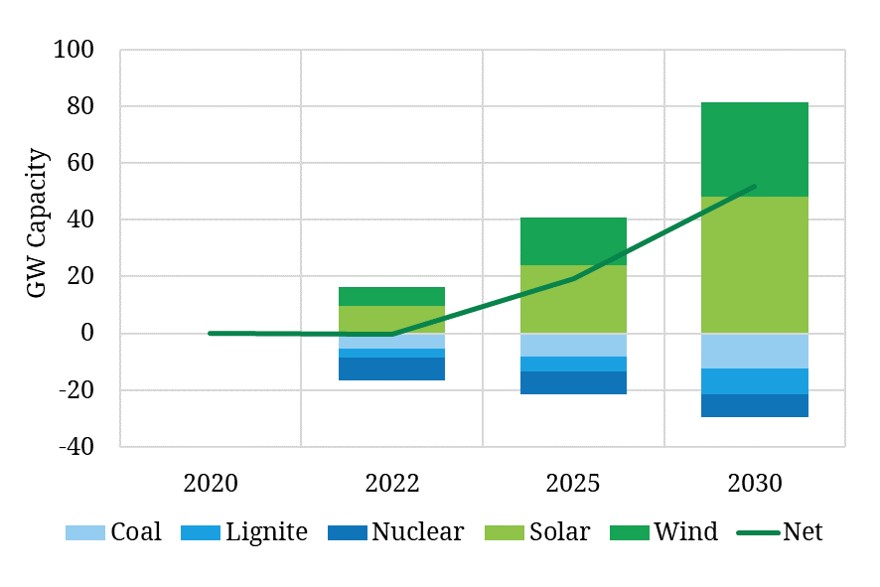 De-rating is important to consider as it allows us to see what the capacity situation will be across peak demand periods, to ensure security of supply. 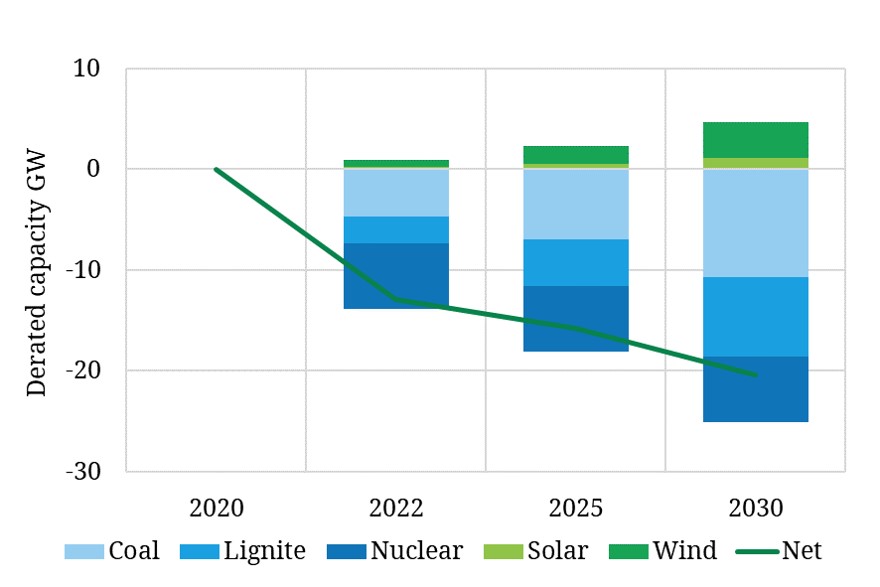 As Chart 2 clearly shows, on a de-rated basis, Germany’s capacity outlook is very different to how it looks in Chart 1, with firm capacity set to fall significantly over the next 3-10 years. New capacity will be required to provide firm and flexible generation.

On an energy basis, we also see some changes ahead. In 2019, nuclear generation accounted for 71TWh of generation, with coal and lignite generating 149TWh. By 2022, assuming linear progression towards 2030 renewables targets, we would expect to see an additional 8TWh of solar generation and 16TWh of wind generation.

The energy output of coal plants going forward is difficult to forecast as initial closures will target the less profitable assets first, however we can assume that the nuclear fleet would continue to produce around 70TWh p.a. had it not been legislated to close.

Chart 3 below shows how from an annual energy produced perspective, the shortfall in nuclear energy alone will not be met by renewables until 2026 at the earliest. Once coal and lignite closures are considered, renewables may still not have made up the total energy deficit by the end of the 2020s. 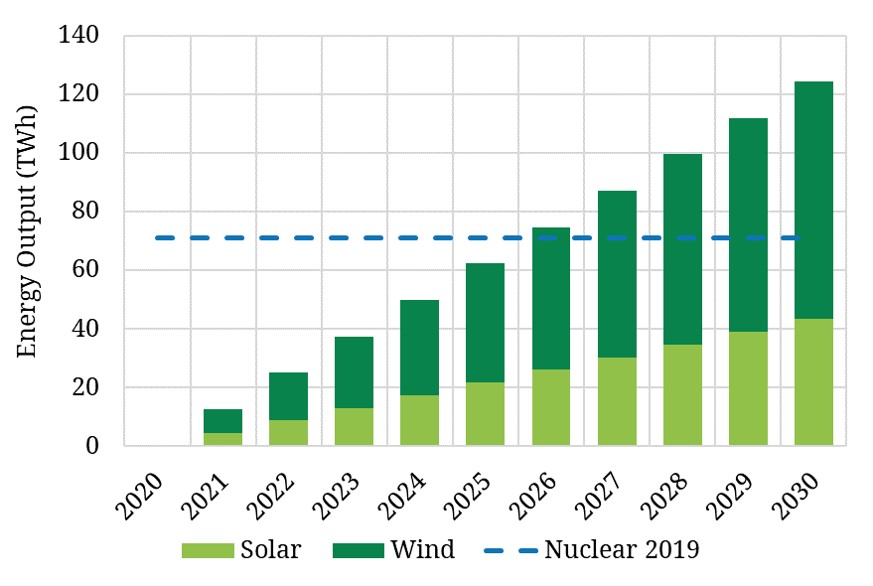 There are well established mechanisms in place to support renewables growth. However the economics of investing in new sources of flexible capacity are less clear, given the absence of a capacity market. Historically, German TSOs have negotiated bilateral contracts to build ‘reserve’ flex, but this approach looks increasingly inconsistent with European initiatives on state-aid.

Gas engines have played a big role in delivering new UK capacity over the last 5 years. Capex is lower than for CCGTs and engines can benefit from a range of other revenue streams (e.g. balancing, reserve, network charge avoidance). Engines will play a role in Germany too, but again the investment case is challenged by an absence of capacity payments.

That leaves DSR, batteries and other forms of storage to do the heavy lifting to plug the capacity gap. These technologies are not hampered by decarbonisation risk. But at present, investment economics remain challenging and additional policy support is required to deliver them at scale.

In addition to new flexible capacity being required, Germany will also likely see a shortfall developing on an energy basis in the 2023-2025 horizon. This is set to drive significantly higher German gas plant load factors.  But it also means higher imports from neighbouring markets (e.g. from higher CCGT utilisation in the Netherlands).

Implications of the changing capacity mix

Historically, periods of low renewables have been met with an increased dispatch of gas and coal generation. As coal and nuclear generation falls away, Germany will need to rely increasingly on existing gas, new flexible capacity and imports to balance the system.

Germany, however, is not going through an energy transition alone. France is closing its coal fleet by 2022, Belgium is phasing out its nuclear fleet by 2025 and Italy & the Netherlands are closing coal fleets by 2030.

Conventional wisdom states that increased interconnection between countries will help balance markets in periods of low or high wind, but is that the case? An analysis of wind load-factors by country shows how interconnection might not be the panacea commonly assumed. 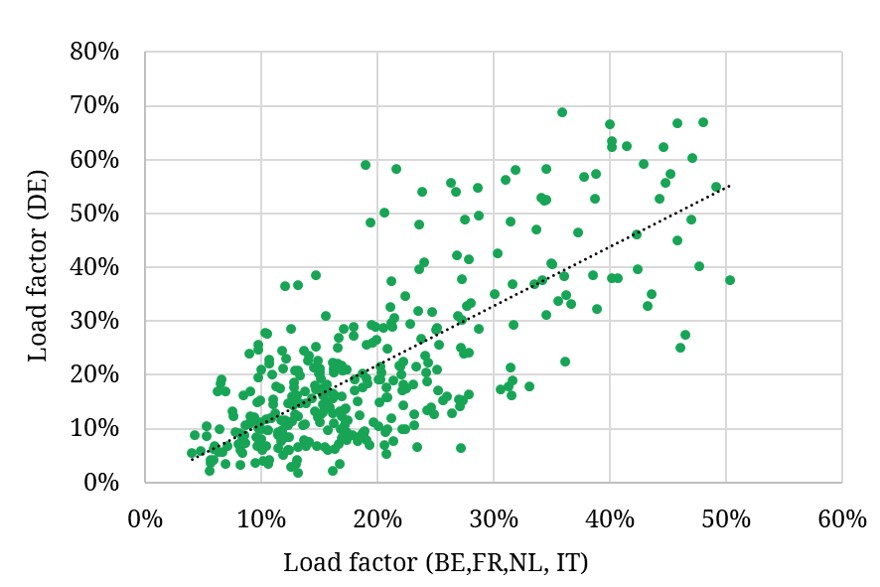 Increased renewables in neighbouring countries will therefore further raise price volatility as similar wind conditions are likely to occur in neighbouring countries. In periods of low renewable output, market prices will surge to meet the high variable cost of peaking units. In periods of high renewable output, prices will plunge to low or negative levels to clear the market.

Storage and DSR will play an important role in shifting load from periods of high renewables to low, as interconnection alone cannot provide a solution. But storage and DSR will not be sufficient to dampen rising price volatility. The combination of a tightening market balance and rising swings in renewable output is set to underpin a structural increase in price volatility through the 2020s.

What gives to square the circle?

Germany is pursuing an aggressive decarbonisation policy with broad public support. But analysis above points to scheduled plant closures driving a material capacity and energy deficit by the mid-2020s.

Renewable build is set to be outpaced by plant closures. The economics of large scale investment in new flexible capacity is challenging. So what gives to keep the lights on and maintain an orderly market?

In our view it is likely to be an increase in policy support for flexible capacity. Low carbon flex such as storage, DSR and hydrogen are likely to be the greatest beneficiaries.  But gas CHPs and peakers may also receive more support, particularly to displace coal.  EU state aid pressure and the scale of the challenge ahead may even lead Germany to consider implementing a broader capacity market.

40GW of European nuclear capacity is scheduled to close by 2040. But 3 key incentives are aligning to suggest a policy shift towards major life extensions.
Read more
Featured Article
20 Aug 2018

Germany is rolling out renewable capacity at an impressive rate. But looming closures of thermal and nuclear plant may induce a capacity crunch in the 2020s.
Read more