2020 will go down in history as the year that net zero targets went global.

The major energy surprises of 2020

We review the major energy surprises & industry trends of 2020, including a status check on our 5 ‘potential surprises’ from January.

2020 will go down in history as the year that net zero targets went global.

The major energy surprises of 2020

The virtual Christmas party season is ramping up and the year is drawing to a close. 2020 is a year that most of us will be happy to leave behind, with the promise of greener pastures ahead in 2021.

That said, there are a lot of major events that have taken place this year that will be important in shaping the future. We focus on these in our last feature article of the year

The article is split into two parts:

… and we’re going to do this without mentioning Covid once.

As has become tradition, we published a set of 5 potential surprises in Jan 2020. A quick review and status check on each of them below.

At the start of 2020, the Green New Deal was a concept being pushed by the more radical fringes of the US Democrat party. By the end of the year it is set to become mainstream US policy, symbolised by the climate focused platform & appointments of Biden’s new administration.

In Europe, a Green New Deal has not only rapidly taken shape this year, but Germany and its neighbours have loosened their purse strings to fund it.  In Asia, the 2020 green shift in policy momentum is best represented by new net zero carbon targets e.g. Japan, Korea and China.

There has been no major recovery in Asian LNG demand in 2020.  But given the sharpest economic shock since the great depression, demand has been remarkably resilient as shown in Chart 1. 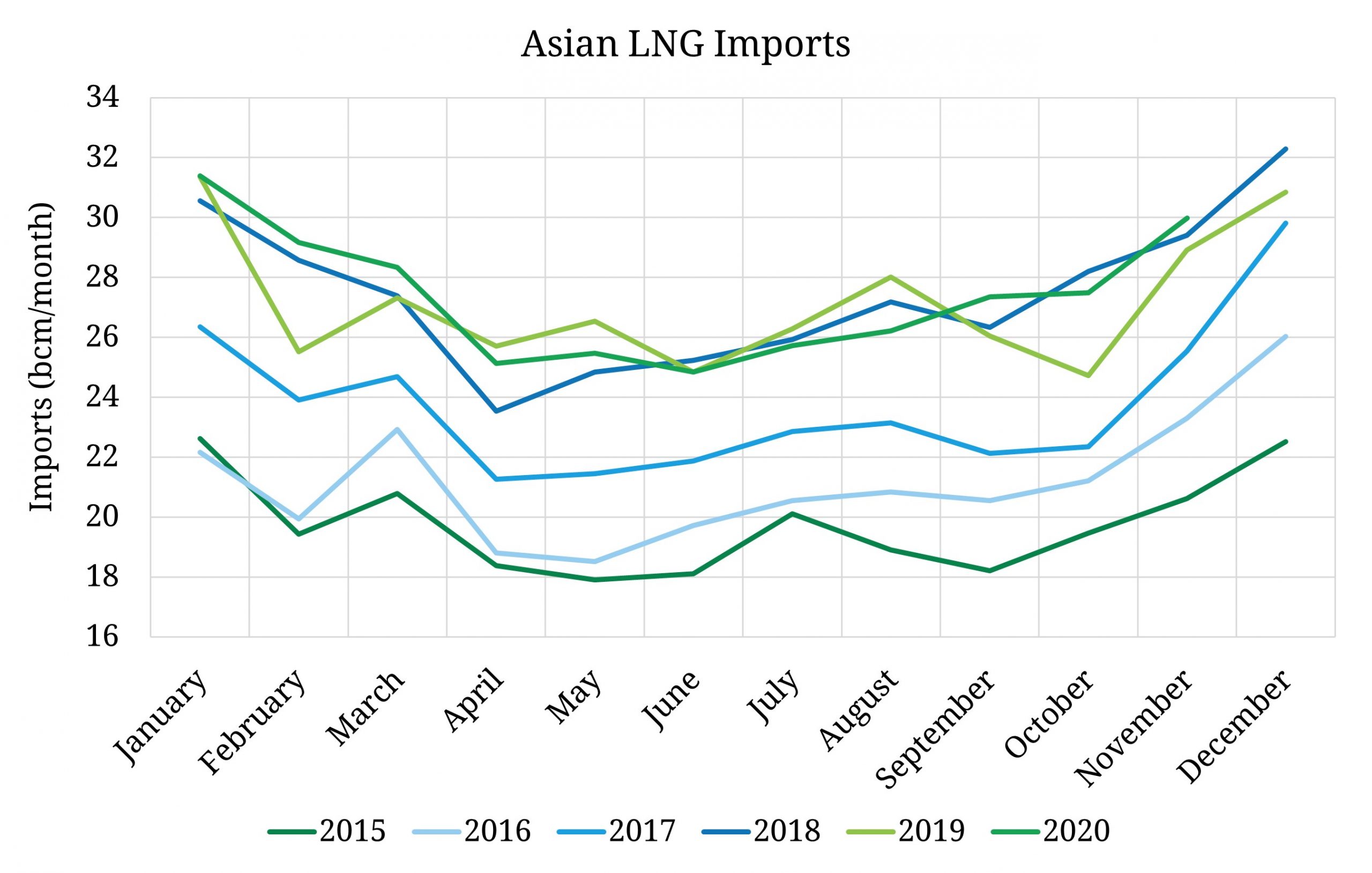 Across Jan to Nov, Asian LNG demand was 6 bcma higher than in 2019, with Chinese demand up 9% year on year.  That represents a remarkable relative strength of demand versus the big negative growth forecasts that were circulating in Q2 2020.

The LNG market is starting to look like a coiled spring.

We published a briefing paper in Q1 2020 on the growing flexibility deficit versus what is required to decarbonise European power markets.  Policy and industry awareness of the scale of required flexibility has certainly grown in 2020. But there has been no great awakening on what we see as looming issues, particularly in Germany.

Germany has now run its first coal closure auction, with 4.8 GW of coal capacity to shut in 2021. The German nuclear fleet and a total of 15GW of coal plants will be closed by the end of 2022. With no capacity market in place to support rapid investment in new flexible capacity, these closures will substantially erode Germany’s derated system capacity margin across the next two years.

The momentum behind hydrogen in 2020 really was a surprise. From a European policy perspective, this was helped by the launch of three key policy initiatives:

These headline policy initiatives have been backed by aggressive green hydrogen targets from national governments, already amounting to 25GW of electrolyser capacity by 2030. Behind the headlines there is support on the way for blue hydrogen as well, particularly in UK, Netherlands and Norway.

Industry commitment to hydrogen investment has accelerated in parallel. We have witnessed this directly via a rapid growth in our client work supporting green & blue hydrogen investment and analysing the impact of hydrogen growth on existing gas & power asset values.

Rather than taking shape, momentum behind the next wave of LNG supply crumbled as gas prices fell to record low levels.

A raft of 2020 investment decisions was expected, including projects in Qatar, Mozambique and the US.  As it turned out there was only one small FID, Sempra’s 2.4 mtpa Costa Azul project in Mexico.

The biggest factor in delaying FID’s was the acute balance sheet stress faced by the oil majors as both crude and gas prices plunged.  This is not an issue that is likely to disappear quickly, suggesting that aside from the Qatari trains, new LNG supply investment may be pretty thin across the next two years.

Price risk in the LNG market is rapidly shifting to the upside.

Next let’s consider three major surprises that have shaped 2020.

2020 will go down in history as the year that net zero targets went global. At a national level, key countries in Asia and North America joined Europe in setting net zero emissions targets. There have been target announcements this year from Japan, South Korea, China, the US and Canada.

After years of political taboo, it is also surprising how quickly climate change emerged as a key theme in the US election and as a core focus for the new Biden administration.  This year saw control of the US climate debate pass from Trump and the Koch lobby in Q1, to Biden and his new ‘Climate Envoy’ John Kerry by Q4.

At a company level, there have also been some seismic shifts. Shareholders are the biggest factor driving change, with share prices of hydrocarbon producers plunging in 2020, partly in response to lower commodity prices but also due to accelerating momentum behind decarbonisation.

European oil majors Shell and BP have committed to net zero targets and announced sweeping changes to their business model in an attempt to pivot towards cleaner business areas.  There has also been a raft of large mining, industrial & technology companies that have ramped up clean targets this year.

2.The resilience of energy markets

2020 has been a masterclass for anyone who doubts the effectiveness of liberalised energy markets. Markets have demonstrated astonishing response and flexibility to absorb the largest economic shock in a hundred years. There has been some volatility, but markets have cleared in an impressively orderly fashion. 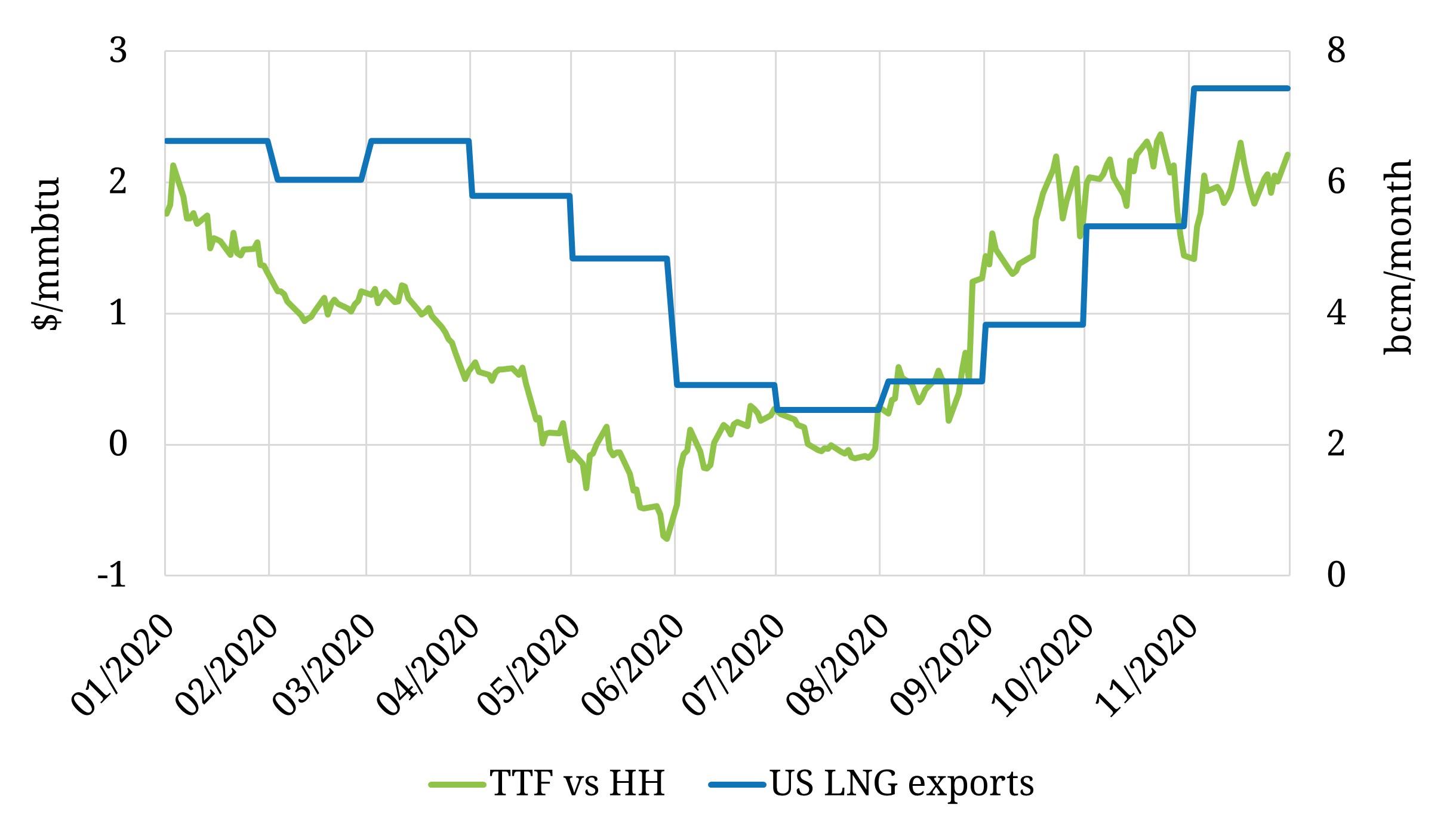 Some of the more dynamic price driven response mechanisms at work have been:

That said, the shocks of 2020 have also exposed some issues, particularly around inadequate flexibility and system operator response in European power markets. If you didn’t know what inertia was at the start of the year, you have probably heard of it by now.

If someone explained to you at the start of the year that:

… you would think they had been smoking crack.

How was this possible? 2020 will go down as the year that the world shifted from austerity to fiscal stimulus.  The IMF has estimated $20 trillion of fiscal & monetary stimulus announced since Q1, more than 20% of global GDP. Setting aside inconvenient issues around borrowing from our future, that is a staggering sum of money. And it is set to grow further in 2021.

In Europe, fiscal response is being focused on clean infrastructure.  Renewable targets have been raised, hydrogen policy is being fast tracked and networks & EV investment is accelerating.

There has also been a subtle but important broadening of the policy narrative this year, with clean investment being about resilience as well as the environment.

We’ve got 5 new surprises for you to consider in our first article back in 2021.

We finish the year with a round up of interesting Timera client work this year:

The common theme across all of this work is the flexibility required to decarbonise energy markets.

To support this work we have continued to expand our team in 2020 and are actively recruiting. And the Timera virtual Christmas bash last week laid to rest the theory that you can’t party online. That said, we’re all looking forward to getting back into the office in 2021!

This is our last feature blog article for 2020. We will be back with more features in Jan 2021 and in the meantime we’ll continue to publish snapshot articles.

We wish you all the best for a relaxing festive season!

The major energy surprises of 2019

We review the major energy surprises & industry trends of 2019, including a score check of the 5 ‘potential surprises’ we set out in Jan-19.
Read more
Featured Article
2 Mar 2020

We set out analysis that shows a rapidly increasing European capacity deficit and a major requirement for investment in 4 different types of flexibility.
Read more