Commodity markets are known for their rapid shifts in supply/demand balance and pricing dynamics. The global gas market is a great case study. In the space of

Commodity markets are known for their rapid shifts in supply/demand balance and pricing dynamics. The global gas market is a great case study.  In the space of a decade we have seen a commodity ‘supercycle’ boom, a global gas glut and a post-Fukushima squeeze.  And now price evolution in 2014 points to the start of something new.

Europe is playing a central role in shaping the evolution of the global gas market, as a gas importer and as a provider of LNG diversion flexibility. In turn, global LNG pricing and flows are becoming increasingly important drivers of the European gas market.  LNG import volumes are still low relative to pipeline imports, but they have a disproportionate influence on marginal pricing at European gas hubs.

The return of significant volumes of LNG to Europe in 2014 has been an important factor behind the hub price slump into the summer. Looking forward into the next phase of global pricing, global price differentials are set to play a key role in driving the evolution of the European gas market.

There have been several quite pronounced phases of global gas pricing over the last decade as described below and illustrated in Chart 1: 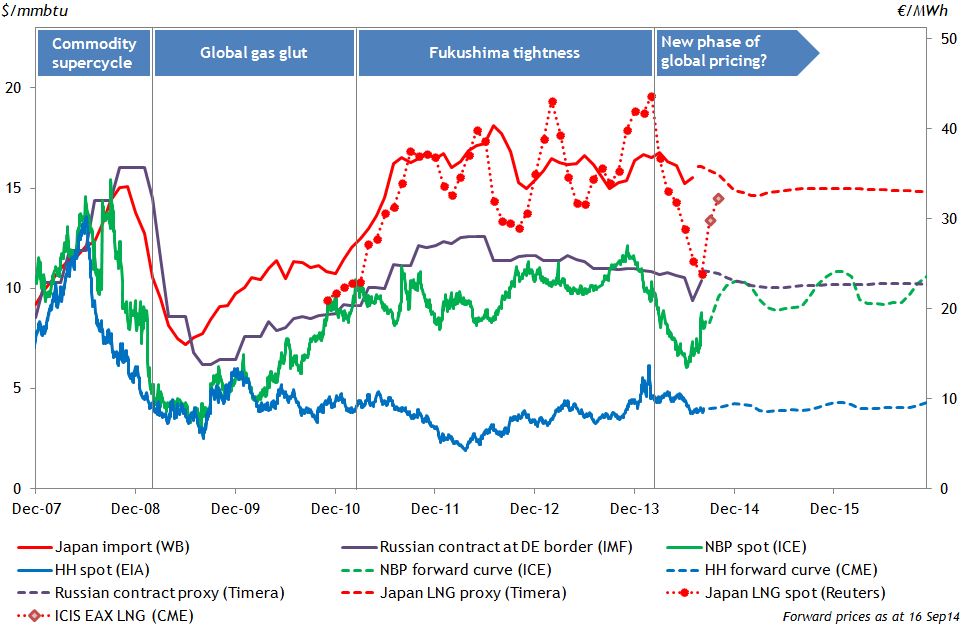 Gateway to a new phase

From the chart it can be seen that a pronounced shift in pricing dynamics is occurring in 2014. As we set out recently, this is no ordinary fall in global gas prices.  Asian spot LNG prices almost halved in H1 2014, from around 20 $/mmbtu to just above 10 $/mmbtu.  European hub prices have slumped in sympathy, to a large extent driven by surplus LNG flowing back into Europe but also by the loss of 57 bcma of demand over the October 2013-April 2014 period  on a year-on-year basis due to a mild winter.  Yet both spot LNG and European hub prices are showing signs of a recovery into the coming winter.

Substantial volumes of new Australian and US LNG exports are looming on the horizon which threaten to tip the global gas market into a period of oversupply (as we set out here). Although new supply starts to come online later this year, volumes do not ramp up in earnest until 2016/17.  That appears to leave the window open for two potential scenarios for the next phase of global pricing:

This means that the flow of LNG into Europe is also likely to become more volatile with a knock on effect for European hub prices. The length of such a transitory phase is likely to be determined by the extent to which emerging demand growth can soak up the substantial volumes of new supply under development.

In both these scenarios, spot LNG prices will play an increasingly important role in determining the behaviour of European hub prices.

The coming winter will be an important test case to understand which of these scenarios is more likely. The approach of winter is helping to stabilise Asian spot LNG prices which are now back above 14 $/mmbtu for November delivery.  This is below long term Asian contract levels (15-16 $/mmbtu at $100/bbl crude) and well short of spot price levels at the start of this year.  However it is enough to incentivise the diversion of cargoes from Europe back to Asia.

The diversion of LNG supply back to Asia and the end of a mild summer in Europe should relieve some of the recent downward pressure on European hub prices.   Certainly the forward curve assumes a sharp price recovery in spot NBP prices as is evident in Chart 1.  And the steep NBP (and TTF) curve contango into winter, points to unease at the ongoing threat of Russian supply cuts.

But perhaps the most important uncertainty for European energy companies is the relationship between hub prices and long term oil-indexed contract prices.  The gap between contract and hub prices which caused European suppliers so much pain in 2009-10 has re-opened again this year.  The evolution of this differential will be a key risk factor in the European gas market going forward.  Will the assessment of Russian ‘oil indexed with concessions’ contract price for Russian pipeline gas into Europe remain the important benchmark for European market players?  Or has the rather opaque process of rebates granted by Russia to many of its European long term contract buyers undermined this as a natural gravitational price benchmark?  We will return to revisit the implications of hub vs oil-index divergence in an article shortly.