One of the challenges governments face from the Covid-19 shutdown is rapidly restarting investment activity and creating jobs. Support for shovel ready infrastructure projects is an obvious target and the energy transition presents a rich opportunity.

One of the challenges governments face from the Covid-19 shutdown is rapidly restarting investment activity and creating jobs. Support for shovel ready infrastructure projects is an obvious target and the energy transition presents a rich opportunity.

Even the most incurable optimist must be having difficulty rolling with the punches from the current flow of news. The impact of Covid-19 is complex, fast moving and highly uncertain. But it helps to deconstruct the current situation into 3 separate but related crises.

Firstly there is a global health crisis in the form of the Covid-19 pandemic. This is understandably the primary focus of media news flow at the moment. We have no expertise in this area and no hypothesis on how it resolves, except to point out that it creates a high degree of uncertainty over the next 6 to 12 months.

The second crisis is the economic impact of the actions being taken to slow the spread of the virus. The temporary but rapid shut down of economic activity is creating an unprecedented global demand shock at the same time it is causing major supply chain disruptions. The depth and duration of this economic crisis is closely linked to the health crisis. But it is also linked to another problem.

The third crisis that has emerged since the start of Mar 2020 is a financial crisis. Financial markets have been displaying many of the stress characteristics seen in the global financial crisis (GFC) of 2008-09. These include disorderly falls in asset prices (e.g. shares & commodities), spikes in asset volatility, frozen credit markets and very poor liquidity.

In today’s article we set out why we think this policy response may induce a wave of new investment in energy infrastructure, despite a tough economic backdrop.

The emerging financial crisis is just as complicated as the health crisis and we don’t have any informed view on how it will play out. Our focus in today’s article is just to set out a ‘tourist view’ of the evidence that a crisis is occurring and to outline the unprecedented monetary & fiscal policy response which we think has important implications for energy investment.

But let’s start by considering in Chart 1 some structural trends & distortions that have emerged over the last decade as a result of the policy response to the last financial crisis (2008-09 GFC). These are important contributors to the current crisis.

Chart 1: A 15 year perspective on some key market trends 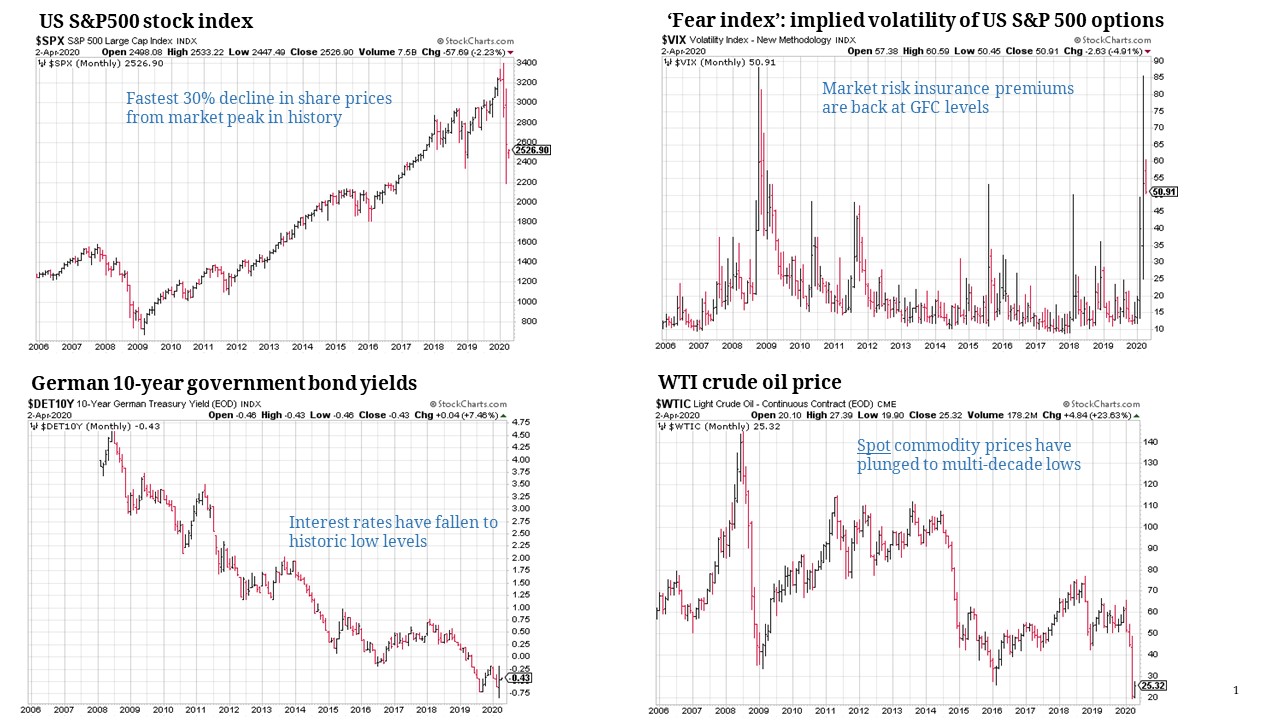 Very large monetary stimulus in the form of central bank quantitative easing, has driven down global interest rates to historically low levels since the GFC. This is illustrated by the bottom left hand panel of Chart 1, showing German government bond yields falling from 4.5% in 2008 to around negative 0.5% today. All other developed economies have a similar chart.

Monetary stimulus and lower interest rates have helped to drive up global asset prices.  This is illustrated by the top left hand panel, showing the benchmark US S&P500 stock market index increasing more than 500% from the depths of the last financial crisis to Feb 2020. The US is just the largest example of a global trend.

There have been several episodes of financial market volatility since the GFC. But every ‘mini-crisis’ that has emerged has been quelled by large and rapid central bank monetary intervention.  This has led to the broadly accepted concept of a ‘central bank put option’ i.e. in times of trouble, investors will be bailed out by central banks intervening to support asset prices and dampen market volatility.

This combination of low borrowing costs, low market volatility and low asset yields (given rising asset prices) has pushed investors to take on increasing amounts of risk over the last decade. Much of the disruption in financial markets in Mar 2020 relates to the rapid & forced unwinding of positions in investor portfolios as risk is repriced as a result of Covid-19 uncertainty.

The market impact of portfolio repositioning is being exacerbated by several other factors:

The combination of these factors has seen market volatility & risk premiums spike to levels seen at the height of the 2008-09 GFC. This is illustrated in the top right hand panel of Chart 1 which shows the level of implied volatility for options on US S&P 500 stock index futures.  This index is parochially known as the ‘fear index’ and reflects the ‘insurance premium’ that investors are prepared to pay for downside protection.

The global monetary and fiscal policy response since mid March this year, dwarfs anything enacted in response to the GFC. Some examples of the scale of the response include:

One of the first questions that springs to mind is where is the money going to come from?  The answer for major developed economies is the digital printing press.  Central banks are essentially creating money to buy (or monetise) government debt in order to backstop markets and support the economy.

This is a variation on a well trodden path. There are hundreds of years of historical precedents of debasing the value of money in order to alleviate a debt crisis e.g. Henry VIII ‘clipping coins’ to reduce the amount of precious metal in gold & silver coinage.

From an investment perspective, currency debasement is of course inflationary, at least in the medium to long term. So it greatly increases the risk of holding cash balances in portfolios, versus investing in real assets.

This may be important from an energy investor perspective, given a number of large energy focused infrastructure and private equity funds currently have relatively high levels of ‘dry powder’.

An argument has been floated across the last few weeks that Covid-19 and its impact will slow down the energy transition. Lower fossil fuel prices reduce the relative advantage of renewables; public tolerance for paying for the transition will diminish when faced with tough economic times; government policy focus will be elsewhere. But this argument ignores the scale of forced policy response that is being induced by the current crises.

One of the key challenges governments face coming out of the Covid-19 shutdown is rapidly restarting investment activity and creating jobs. Support for shovel ready infrastructure projects is an obvious target and the energy transition presents a rich opportunity, at least in Europe.

There is broad public and political support for climate change action across Europe’s larger developed economies.  There is also a strong development pipeline of energy investment projects e.g. across renewables, storage, interconnectors & other peaking flex.  There is also strong momentum behind investors deploying capital targeting clean energy infrastructure, which may be boosted by the risk of inflation.

Finally, Christine Lagarde, the new head of the European Central Bank, has openly been discussing the combined roles of monetary & fiscal policy in tackling climate change. Her political capital across Europe’s largest countries means she is likely to be a key player in coordinating a unified European policy response to the current crises.

Rather than hamper investment in European energy infrastructure, the current crisis may actually turn out to be an accelerant. Policy driven stimulus targeting decarbonisation investment may form an important part of the ‘economic cure’.

We set out analysis that shows a rapidly increasing European capacity deficit and a major requirement for investment in 4 different types of flexibility.
Read more
Featured Article
16 Mar 2020

We set out the drivers behind UK capacity price recovery, look at the implications of recent auction results and at why they’re good news for flex investment.
Read more
Featured Article
30 Mar 2020