Overcapacity in Germany is driving down European power prices and crushing gas plant load factors. At the same time spot volatility is increasing as growing volumes of German intermittent capacity impact marginal pricing. In response forward market liquidity is falling along the curve and becoming more focused in the prompt. These trends are set to continue as renewable capacity expands.

In a recent article we set out the impact of the rapid increase in renewable production on the German market.  Because Germany is at the core of the European power market, with large volumes of interconnection to its neighbours, Germany is exporting the impact of its aggressive renewable policy across North West Europe.

Overcapacity in Germany is driving down European power prices and crushing gas plant load factors.  At the same time, intraday price shape is decreasing and spot volatility increasing as growing volumes of German intermittent capacity impact marginal pricing.  In response, forward market liquidity is falling along the curve and becoming more focused in the prompt.  These trends are set to continue as renewable capacity expands.

Overcapacity and changes in marginal pricing

German policy support for renewable capacity has lead to a surge in new generation capacity at the same time demand has slumped as a result of the financial crisis.  As this growth in low variable cost generation impacts marginal pricing, Germany’s renewable policy is effectively subsidising lower power prices across North West Europe.  This is clearly of benefit to consumers but is creating headaches for owners of gas plant as load factors and returns plummet.  The German transition to renewable capacity is acting to materially change market price dynamics.

The German merit order is different from its neighbours to the west, given a capacity mix with much larger volumes of hard coal and lignite capacity.  Lower variable cost coal and lignite have moved into a key marginal price setting role across North West Europe as renewable output has increased and coal prices weakened relative to gas.

German power exports tend to be larger across the winter months when German coal is displacing more expensive gas capacity in neighbouring markets, particularly the Netherlands and France.  There have also been periods of high offpeak exports to the Netherlands and France as robust renewable production in Germany pushes cheaper coal and lignite on to the margin.  The role of coal as the dominant German price setting capacity is clear in Chart 1 showing output by generation type in Nov 12.  This chart also shows examples of evenings and weekends where robust renewable output and low demand have pushed cheaper lignite capacity onto the margin, in turn driving higher export flows.

Transitions in shape, volatility and liquidity

The impact of the surge in German renewable capacity has been felt most acutely in the prompt horizon.  Price shape is now a function of system demand net of renewable output which can vary significantly from one day to the next.

But there are some important trends in renewable output.  Both solar and wind production tend to be more pronounced in the day time hours as illustrated in Chart 2.  This has acted to flatten intraday price shape to the extent that there have been periods where peak prices have fallen below offpeak.

Chart 2: May 12 solar and wind vs conventional German production

The intermittent nature of renewable capacity, in particular wind, is also driving sharp intraday price swings.  Changes in renewable production can cause sharp movements in the power price as the marginal price setting capacity changes.  Price volatility is increasingly being influenced by much cheaper lignite or even nuclear and renewable production coming on the margin.  As a result there have been a number of cases of zero or negative prices.

The upshot of overcapacity and higher prompt volatility has been a shift in forward market liquidity to the prompt horizon.  Volatility along the curve has been crushed by the capacity overhang, reducing both speculative and hedging activity.  Prompt volumes on the other hand are reacting to an increase in portfolio hedging requirements to manage short term volatility and an associated increase in speculative trading activity, as shown in chart 3. 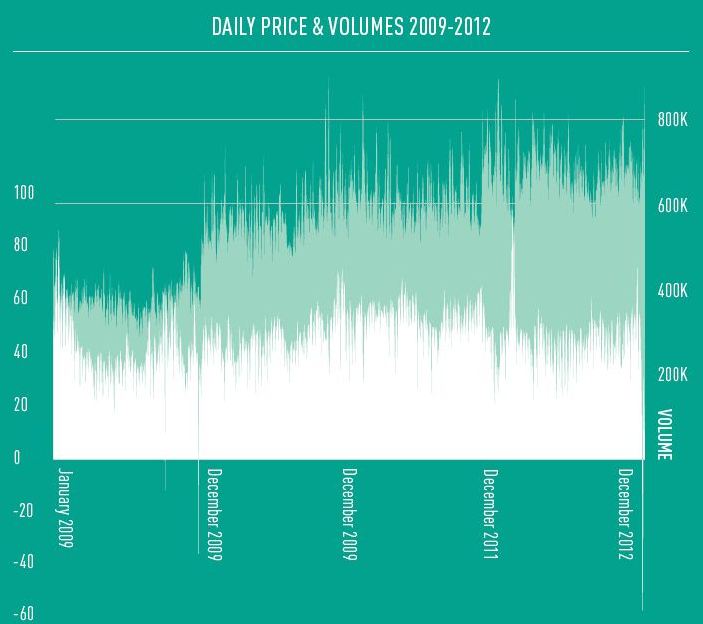 Expect more of the same?

To the extent that renewable capacity continues to be rolled out in Germany, the influences described above are likely to continue, becoming more pronounced over time.  The German power market is also the canary in the coal mine for other European markets pursuing aggressive renewable targets.

But as the German election approaches in September, Germany will also provide an important indication of the political will across Europe to continue the aggressive transition to renewable energy in the face of ongoing economic weakness.  European power market dynamics are evolving rapidly with the roll out of renewable capacity.  But the pace of future change is increasingly becoming a function of political will.

The German power market – a tale of two stories