Concern around the threat of a mid-decade capacity crunch in the UK power market has diminished noticeably over the last 12 months. Last winter was mild, with

The threat of a mid-decade capacity crunch in the UK power market made national headlines in 2013. Concern around this threat has diminished noticeably over the last 12 months.  This change in mood is down to several factors.  Conditions last winter were benign, a new Capacity Market is on the way, and the system operator has new powers to tender for reserve capacity.  The calmer tone in the regulator’s 2014 Capacity Assessment reflects these factors.

Plant availability was relatively good last winter with a system capacity margin around 10%. However a number of scheduled asset closures are approaching and the UK is heading towards several years of historically low system capacity margins.  System margins are projected to fall below 5% by 2015 as shown in Chart 1.  With the capacity buffer this low, the risk of disorderly market behaviour and periods of system stress materially increases.  A cold winter, further asset closures or major plant outages across this period may cause a sharp rise in power prices and volatility. 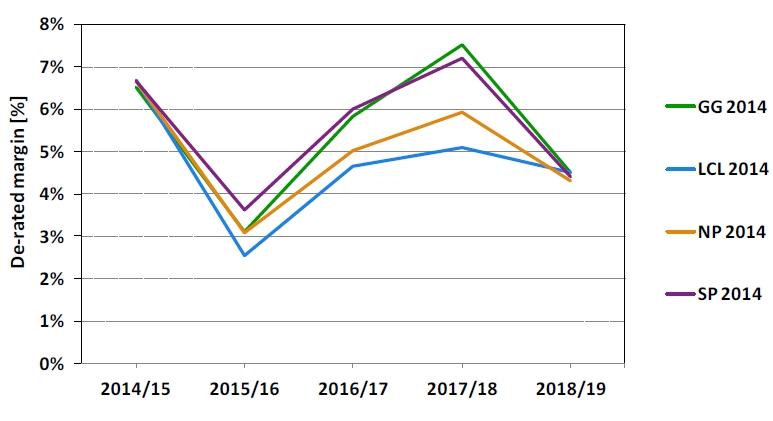 After raising the alert in its 2013 Capacity Assessment, Ofgem set a calmer tone in its latest Assessment (published in June). This largely comes down to three factors:

In this article we take a look at some of the factors that will drive the system capacity balance over the next three years and their potential impact on market price dynamics.

The decline in peak UK power demand over the last few years has been quite pronounced (as shown in Chart 2). The drop from 60GW to 58GW in 2008-09 reflected the impact of the financial crisis. There have also been some structural factors reducing peak demand, e.g. an increase in embedded renewable generation (which nets off demand).  But unusual weather was a key driver of the fall in demand in Winter 2013/14 (from around 56 to 54 GW).  Last winter was one of the warmest and windiest in recent history.

A cold winter across the next 3 years with a recovery in peak demand back to 56GW (or higher) could lead to a very tight system capacity balance.  This is hardly an extreme scenario on the distribution of possible demand outcomes.

The other important part of the capacity balance equation is generator availability. Uncertainty around available capacity can be split into two categories:

There is significant uncertainty associated with both of these categories, which erodes the effectiveness of scenario based forecasts of future outcomes. It is also an unfortunate characteristic of power markets that events which contribute to system stress tend to be positively correlated.

A number of unplanned outages are impacting the UK market coming into this winter (which are not reflected in the system margins shown in Chart 1). Two of EDF’s nuclear plant at Heysham and Hartlepool (around 2.4 GW) may remain offline until the end of the year given unexpected boiler safety issues.  Units 3 and 4 (1 GW combined) at SSE’s Ferrybridge plant are also out after a serious fire, with Unit 4 likely to remain on outage for the full winter.  There is also an overhang of availability risk associated with switching on older gas-fired plants which are currently sitting cold for long periods.

There is around 10 GW of older and less flexible CCGT capacity that has been running at low or zero load factor over the last two years. Most of this capacity is currently suffering substantial losses given ongoing fixed costs.  Plant owners are hanging on for a sparkspread recovery, favourable reserve contracts or capacity payments from 2018, but their patience to absorb further losses is being tested.  The 1 GW Barking power station recently announced it would close.  In our view it is quite possible that several more GWs of old gas capacity could either close, or be removed from the energy market under reserve contracts with the system operator.

In June this year, National Grid announced its intention to contract Supplementary Balancing Reserve (SBR) services as an additional precaution across the period prior to Capacity Market implementation in 2018. Grid also announced the volume of SBR it intended to contract (see table below) and indicated that it would only tender for demand side reserve (DSBR) for the coming winter. 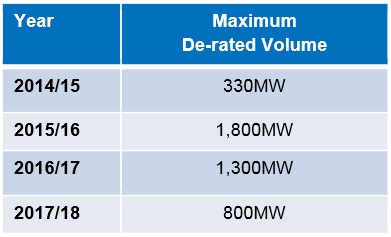 At the beginning of this month, National Grid announced its intention to run an additional tender for SBR this winter. The volume of generation capacity to be contracted is yet to be announced, but the tender is an indication of Grid’s nervousness around unplanned outages and plant closures.

What is important to note about capacity contracted under SBR services is that while it is available to the system operator in emergencies, it is effectively removed from participating in the energy market and balancing mechanism. National Grid’s mandate is to use SBR capacity only as a last resort (i.e. just prior to issuing Emergency Instructions for involuntary demand reductions).  So by contracting SBR capacity, Grid reduces the probability of brown or blackouts.  But the window remains open for a substantial increase in power prices and volatility if the market tightens over the next three years.

Price dynamics in the wholesale energy and balancing markets are driven by the level of competition between generators to provide the marginal MW of capacity required.   Plant closures, outages and SBR contracting all act to reduce competition at the margin.  This in turn acts to increase scarcity rents earned by remaining generators and hence to increase power prices, sparkspreads and price volatility.

After several years of healthy system capacity margins and subdued prices it is easy to assume current market conditions will continue.  But as the system capacity margin falls over the next three years, the probability of a sharp increase in power prices, spark spreads and price volatility increases.  This would provide a welcome relief for the owners of existing flexible gas plants, which will be key to maintaining system security of supply as the capacity margin tightens.