US exports and the trans-Atlantic cost question

The costs of moving LNG from the US to Europe was one of the key focus points at last week’s Flame conference. We set out why we think costs may surprise on

US exports and the trans-Atlantic cost question

The costs of moving LNG from the US to Europe was one of the key focus points at last week’s Flame conference.  A number of divergent views were presented on the level of costs that US exporters need to recover in order to send LNG to Europe.  However there was a consensus that the trans-Atlantic cost differential was likely to become a key factor driving gas flows and hub pricing dynamics.

Timera Energy gave two presentations at Flame that set out our view on trans-Atlantic variable costs and the influence of these in driving US vs European hub price differentials.  Given the interest this topic attracted, we have focused today’s article on setting out a more detailed breakdown of our assumptions, with a particular focus on the treatment of shipping costs.

US export contracts are structurally different from other LNG contracts.  They are structured as a liquefaction capacity option rather than a conventional gas supply agreement.  This means contracts have the inherent flexibility to:

Contract holders pay a fixed capacity fee (e.g. 2.25 $/mmbtu for Sabine Pass). But importantly this is a sunk cost and has no bearing on flow decisions which are driven by variable costs.  This means that US export contracts are essentially a complex option on the spread between Henry Hub and regional spot LNG prices.  We show a simplified representation of the payoff for this option in the diagram below.

The strike price of this option is driven by the variable costs of (i) liquefaction (ii) shipping and (iii) regas as we set out in last week’s article.  We also defined our estimate of a current trans-Atlantic variable cost range for delivery of US exports to Europe as follows:

It is important to note that these numbers are defined using current market fuel and charter rates which may change going forward.

US export volumes are likely to continue to flow to Europe as long as the spread between NBP/TTF and Henry Hub prices exceeds the upper bound of trans-Atlantic variable costs.   Exports may of course flow elsewhere (e.g. to Asia or South America) if netback prices are more attractive.

Chart 1 sets out the component breakdown of our upper and lower bound estimates for trans-Atlantic costs. 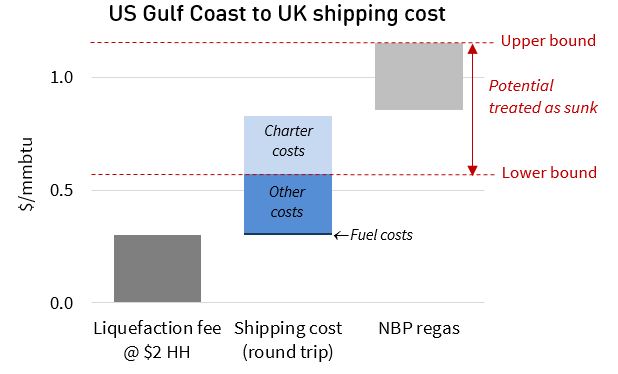 There are some important factors which can influence these cost estimates.  Fuel costs will vary by vessel type, with a key consideration being to what extent the vessel runs on conventional marine fuel (e.g. gas oil or fuel oil) versus boil-off.  Some vessels can make the trans-Atlantic journey entirely via use of boil-off albeit at a reduced speed (14 knots vs 19 knots).  Chart 2 illustrates the impact of running on boil-off vs fuel oil for a Gulf Coast to UK journey. 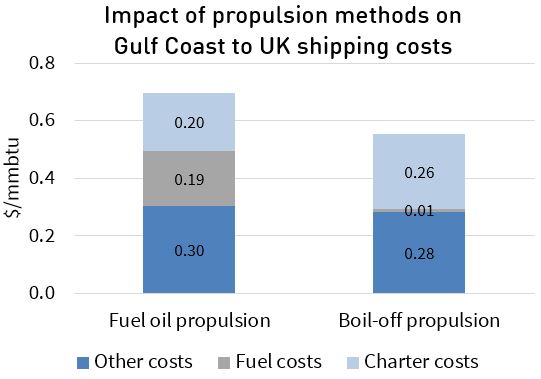 Another key point is the treatment of fixed and variable costs of the ballast (unladen return) voyage. When shipping margins are healthy it is reasonable to assume that in some cases that ballast voyage costs can be internalised by the shipping operator.  But under current conditions, low charter rates do not support annual vessel cash costs, so it is reasonable to assume that the variable cost of the ballast journey is included in costs calculations.  These are quite low if the vessel is assumed to run on boil-off.
We have not included an allowance for port costs in the US liquefaction fee.  There is a lack of transparency as to what charges will be levied on LNG carriers but for other vessel types in can be upwards of $500k.

US cargoes will go to the highest bidder

Any differences in the cost of getting gas liquefied and loaded onto a vessel are likely to be important in determining the ‘merit order’ of US export volume shut ins.  But in our view the shipping and regas costs of the holders of US export contracts will not necessarily drive trans-Atlantic flow dynamics.  US cargoes will likely be sold to intermediaries if they have access to lower shipping and regas costs.

This is where we believe that NBP/TTF vs Henry Hub shut in spread levels may surprise on the downside.  In other words shut ins may be driven more by the lower bound (reflecting sunk shipping and regas costs) than the upper bound (reflecting full variable cost recovery).  Cargos will go to the highest bidder and that is likely to be the party with the lowest variable cost structure.  Don’t underestimate the ability of market driven innovation to erode the trans-Atlantic price spread.