We use a case study to illustrate why gas storage asset variable costs are a key value driver. We also look at how costs can be optimised to increase value.

Like cars, gas storage assets come in a range of sizes and speeds.  Any conversation comparing the relative merits of different storage assets tends to focus on:

These headline attributes are definitely important in evaluating a storage asset.  But there is another characteristic that often gets less attention than it deserves: variable cycling costs.

Lower variable costs mean a lower hurdle to capture market price spreads. This translates directly into higher utilisation and higher expected returns on storage capacity.  It also offers downside protection in a low seasonal spread environment (such as the last five years).  For this reason, low cycling costs are a boon for traders and storage owners alike.

The most practical way to illustrate the impact of lower variable costs is via a simple case study. In Chart 1 below we compare value capture for two different UK storage assets:

For simplicity of illustration we have assessed value capture against a ranking of Day-Ahead (D-A) versus Within-Day (W-D) price spreads. This assumes a basic D-A vs W-D trading strategy as follows: 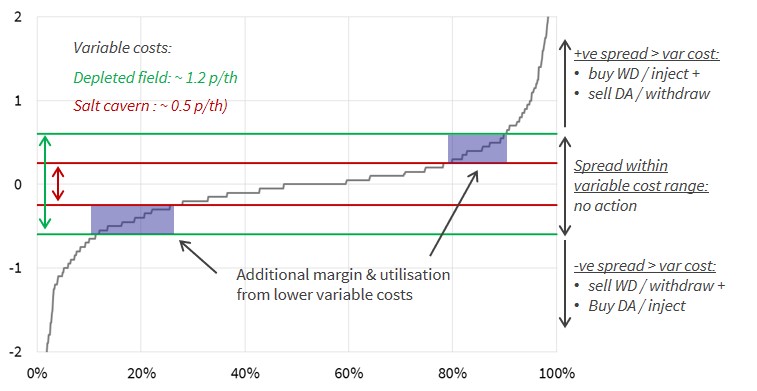 The grey line shows the ranked NBP Day-Ahead to Within-Day price spread for across 2015-2018.  For both storage facilities there are a range of lower spreads where no action is profitable i.e. where variable cycling costs exceed price spreads.  But the ‘no action’ range for the fast cycle storage (red lines) is significantly smaller than for the depleted field (green lines).

Lower cycling costs mean greater utilisation & cycling opportunities for the salt cavern facility.  Lower costs also mean that the salt cavern captures a higher margin from spreads than the depleted field can capture.  Both these dynamics help protect margins for assets with low cycling costs when operating in a low price spread environment.

The variable costs of storage can often be influenced by asset owners as a way of enhancing returns and optimising asset value.  Key factors influencing variable cost are:

There is ultimately a cost / benefit trade off for owners in optimising the variable costs of storage assets. Taking actions to reduce variable costs makes sense as long the incremental spend to achieve reductions is less than the risk adjusted market returns it yields.