Welcome back to 2020! We will shortly be cutting over to a new website and blog page. This is part of a comprehensive Timera brand refresh currently in progress. This includes revised service lines, a new website, new publication format and a new blog layout.

As the year progresses we will be incorporating new blog content, drawing on a broader range of input from our expanding team. If you want to receive a weekly summary of new content in an email you can subscribe via the link on this page (it’s free!). You can also receive content as it is published via LinkedIn or Twitter feeds.

So without further ado, we start the year with our usual 5 surprises.

Wind back the clock two years and ‘climate change’ was a taboo topic in US politics. That started to change with the Democrats winning a House majority in 2018.  Then the concept of a ‘Green New Deal’ policy platform was born in 2019.

2020 is likely to be dominated by the US presidential election. All prominent Democrat candidates have adopted some form of the Green New Deal.  This could mean that climate action is a central policy issue in the lead up to the election, particularly given such a stark contrast to Trump’s policy approach.

The US debate may be a catalyst for growing momentum behind the Green New Deal concept globally (even if the Democrats lose the election). For example Germany is already in the process of adopting its own version.

Our first surprise for 2020 is just how quickly this policy concept could spread. It is supported by three powerful tailwinds:

Europe could be a particularly fertile source of surprise given a new and capable European Central Bank president (Christine Lagarde) who looks to be gearing up as a champion of fiscal expansion to fight the dual battles of economic weakness and climate change.

2019 saw a big downside surprise in Asian LNG demand growth. Four of the ‘Big 5’ Asian buyers saw declining demand (vs 2018) and the demand growth for the 5th (China) halved. This has fuelled growing pessimism on demand growth in 2020.

Our second surprise for the year is that Asian LNG demand growth rebounds back towards 2018 levels. Weak economic growth played a significant role in driving soft LNG demand in 2019.  US-China trade tensions were also an important factor.

A watered down trade deal was signed last week, at the same time that forward economic indicators have started to stabilise. There has also been a global ramp up in fiscal and monetary expansion across the last twelve months.

There are also some specific LNG market drivers that could support demand recovery. For example, issues with Japanese nuclear restarts and switching from coal to gas to improve air quality (e.g. Sth Korea, China). A cold snap in Q1 2020 could also significantly boost demand.

Continental European power markets have lived through a decade of overcapacity as a result of lower than expected demand since the financial crisis.  This has helped to contain power price levels and volatility.

That situation could be set to rapidly change over the next three years as a substantial volume of regulatory driven capacity closures are implemented. The German power market lies at the centre of what could be a transformational shift in European supply & demand balance. 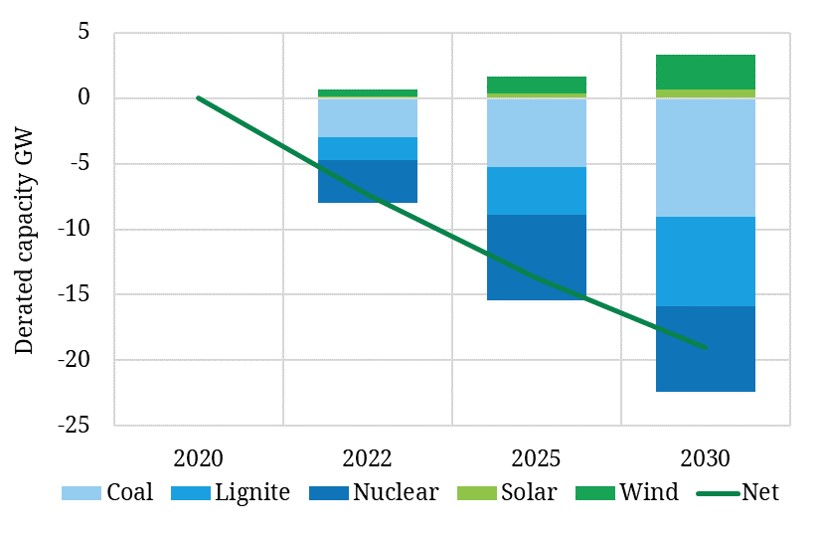 Germany is set to lose 8 GW of derated capacity by 2022 (on top of 1. closures that have already occurred over the last two years and 2. the 2.7GW of lignite capacity ring fenced for closure in a capacity reserve).  That volume almost doubles by 2025 (15 GW) and is likely to reach 22GW by 2030. And this does not account for closures of older gas-fired plants.

Out third surprise for 2020 is that the market, investors (& maybe even policy makers), wake up to the implications of the looming structural shift in the German and NW European market balance.

Everyone has heard of the concept of the ‘hydrogen economy’. But to date there has been an element of science fiction to the vision of a hydrogen fuelled world. There is chasm between dreams and practical realities of the cost-effective consumption of hydrogen.

Could 2020 be the year that fantasy starts to transition to reality? There are two things required for this to happen:

Action is likely to be focused on Northern Europe (e.g. UK & Netherlands) and Japan, given a current dependency on natural gas and low or declining domestic resources. However there may be a broader race to prove production technology e.g. Australia is currently exploring both green & blue hydrogen projects to export low cost renewables & methane in a hydrogen form to Japan.

If a 2020 ‘hydrogen surprise’ does occur, it is likely to be led by industry investment with a view to kickstarting policy support.

One of our ‘hindsight surprises’ for 2019 was the volume of new LNG projects that reached FID (a record 65 mtpa). This means substantial volumes of LNG coming to market across the 2024-26 horizon.  Our final surprise for 2020 is that FIDs continue at a blistering pace, with a mountain of LNG building into the mid-2020s.

As 2020 begins, we are sitting in the middle of a mini-glut. Yet prices and volatility may recover sharply across the 2021-23 period as new supply falls away (given a hiatus in new project FIDs from 2016-18). This in turn is causing a ‘second wave race’ to bring new liquefaction projects to FID for delivery in the mid 2020s.

There is a growing queue of potential projects that could reach FID this year. These span the US (e.g. Lake Charles, Freeport, Cameron, Corpus), Mozambique, PNG, Canada and the official sanctioning of the Qatar expansion trains (T8-11). While individually the economics of some of these projects may be compelling, the combination of all of them could build a formidable second wave.

There is a remarkable 5 year pattern to LNG market cycles that is linked to project delivery lead times. For example, from the current mini-glut, step back 5 years to the market slump of late 2015/early 2016, or another 5 years to the glut of 2010. You would have to be brave to bet on a tight LNG market in 2025.

As usual we’ll be back at the end of the 2020 to review these surprises… as well as reviewing what actually happened. In the meantime we wish you all the best in negotiating the surprises of 2020.

The major energy surprises of 2019

We review the major energy surprises & industry trends of 2019, including a score check of the 5 ‘potential surprises’ we set out in Jan-19.
Read more
Featured Article
7 Jan 2019