Liquidity and price transparency is evolving rapidly and supporting increasing price correlation across European gas hubs. But some physical and contractual co

Trading in the European gas market has developed around a two tier structure of trading hubs.  Forward liquidity is focused at the UK NBP and Dutch TTF virtual trading points.  Prompt liquidity has emerged at a number of other locations (e.g. Zeebrugge, NCG, Gaspool, PEGs, CEGH, Baumgarten and PSV).  Participants manage their forward exposures at the liquid hubs and then use liquidity at the other hubs to balance their physical positions over the prompt horizon.

An important feature of this tiered European gas hub structure has been the strength of price convergence. Prices between the different Continental hubs can diverge over the prompt horizon (e.g. within-month) as a result of locational supply and demand factors (e.g. weather, LNG flow). But structural divergences in prices beyond the prompt horizon are becoming rarer and price correlation between hubs is becoming stronger.

There are several drivers of convergence & correlation.  Increases in short term trading, supported by capacity release programmes, unbundling of TSOs and flexible capacity allocation mechanisms have helped incumbents and non-traditional shippers to arbitrage price differences across hubs.  Another important catalyst for hub price development is an oversupplied market. Hub liquidity and the convergence of prices across hubs is boosted by companies selling surplus volumes of gas. This gave a significant boost to the evolution of European trading hubs during the 2008-10 gas glut.

We have now entered a new phase of oversupply with increasing volumes of LNG flowing into European hubs. This should again support hub development. But some physical and contractual constraints remain as an obstacle to a truly integrated European gas market.

There are two important metrics that provide an insight into European hub integration:

Structural price convergence and higher levels of correlation also act to equalise levels of volatility across hubs which in turn decreases the extrinsic value of transportation capacity.  In today’s article we focus on price correlation as a measure of hub integration. We focus on the day-ahead horizon where liquidity is at its greatest. This is also typically the horizon over which we would expect to see evidence of the strongest drivers of price differences across hubs (e.g. due to weather variations or local supply issues). 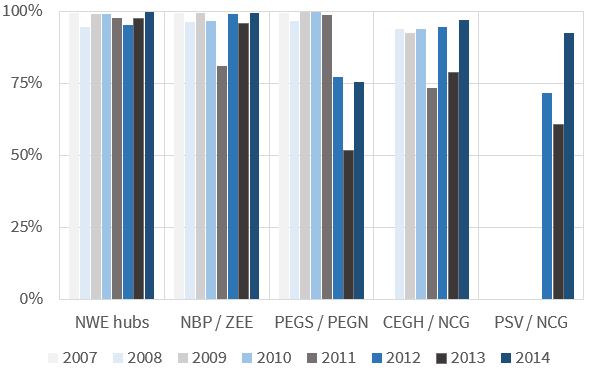 The first two groupings of correlation scores in the chart, illustrate the strong parallel movement of day-ahead gas prices within the well-integrated North West European hub grouping (TTF, NCG, GSL, ZEE, PEG Nord). This reflects the fact that in NW Europe there is adequate transmission capacity across hubs, no barriers to trade across borders, and a limited impact of anti-competitive behaviour. Shippers can take advantage of these conditions to exploit any short-term trading opportunities across hubs.

Strong price convergence and increased correlations have also hit trading book margins over the last few years.  Whilst not so good for trader bonuses it provides clear evidence at a broad level of an efficient and well functioning market that ultimately will have benefited many European consumers.  It also acts to highlight cases and the impact of temporary or structural price de-linkage.

Evidence of problems on the southern boundaries

The 3rd, 4th and 5th grouping of correlation scores in Chart 1 tell a different story of price convergence between NW European hubs and some important peripheral pricing points. The lower correlation scores here reflect price de-linkages at the PEGS (Southern France), PSV (Italy) and CEGH (Austria) hubs. These are caused by barriers to trade that remain between these markets and NW European hubs, preventing full integration.

PEGS de-linkage: The nature of these barriers is primarily physical for France and Austria: de-linkages occur when there is physical congestion of the interconnecting infrastructure. For example PEGS de-links when physically separated from PEGN given congestion on the North-South (N-S) transport link. This has typically been due to LNG supply being diverted away from Europe, requiring consumption to be met by higher flows from north.

As the LNG market tipped into a state of oversupply in the second half of last year, the volume of cargo diversions from the south of France fell. The resulting increase in supply to this region restored a single price for gas within France as can be seen in Chart 2. 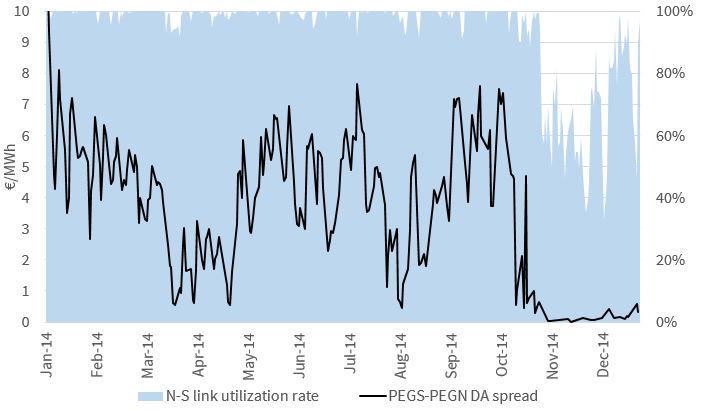 The prevalence of congestion issues on the French N-S link has already prompted the decision for investment in reinforcing the physical infrastructure, aiming at creating a single French market by 2018.

PSV de-linkage: Price de-linkage at the Italian PSV hub is a somewhat different story. Although the PSV premium increased significantly in H2 2013 and H2 2014, most of the time the route from the lower-priced NW European hubs to the Italian hub was not physically congested. For example in 2014, at least 20% of interconnection capacity was available and it was fully utilised only for limited periods in September.

Under-utilisation of transmission capacity linking the NCG and PSV hubs reflects contractual rather than physical barriers to trade as we have written about previously. Congestion has to some extent been alleviated by re-sales of pre-booked capacity on an interruptible basis carried out by TSOs and by ENI’s release of long term booked capacity through periodical auctions. But full price convergence with NW Europe requires regulatory attention to progress a further reduction in contractual barriers.

CEGH de-linkage: CEGH is significantly better integrated with NW European hubs than PEGS and PSV. But there are physical constraints that can arise that cause price separation. For example issues arose from the requirement to ship gas eastwards, due in part to reverse flow to Ukraine and Russia not meeting nominations in the summer of 2014. This led to frequent saturation of transmission capacity at Oberkappel, especially favoured by physical constraints on the German side (disparity between entry and exit capacity, plus pressure constraints in the MEGAL system). Offered interruptible capacity was not enough to solve the bottleneck between NCG and CEGH under these conditions.

Barriers to integration are expensive

Although they may appear relatively minor, the cost of de-linkages is not negligible. Some simple calculations below illustrate the increased costs of purchasing gas as a result of congestion in 2014:

These numbers provide a clear incentive for regulators to ensure policy and capital is being directed in the right places.

A fully integrated European gas market will also require a degree of foresight.  Market conditions are also set to structurally change over the next decade with declining domestic production, a new wave of LNG and a potentially changing Russian export strategy. These factors may drive a new set of congestion problems. The evolution of a fully integrated European gas market against the backdrop of these structural changes will require regulators to show proactive anticipation rather than reactive response.