Hub price convergence has been one of the great structural changes in the European gas market over the last decade. While North West European hub prices have a

Hub price convergence has been one of the great structural changes in the European gas market over the last decade.  While North West European hub prices have already largely converged, Southern Europe is now falling into line.  The evolution of the Italian PSV hub over the last year is a case study in the power of spot price signals driving convergence.  Is the Spanish AOC hub set to follow?

North West European convergence took a leap forward with the development of Norwegian portfolio flexibility in 2006-07 (e.g. commissioning of the Langeled pipeline) that facilitated the arbitrage of price differences across the NBP, TTF and Zeebrugge hubs.  This was reinforced by the gas glut (2009-10) and the consolidation of German hubs (2010-11) which combined to significantly boost hub liquidity.

The French hubs (PEG Nord, PEG Sud and TIGF) illustrate the fact that liquidity is not a necessary condition for convergence.  Liquidity in France may be limited to smaller spot volumes, but the majority of industrial and commercial customers are contracting gas on hub related pricing terms.  Despite some resistance from incumbent suppliers, the Italian and Spanish gas markets are also falling into line.

Italy: a case study in convergence

The penetration of North West European hub price signals into the Italian gas market over the last year is clearly illustrated in Chart 1. 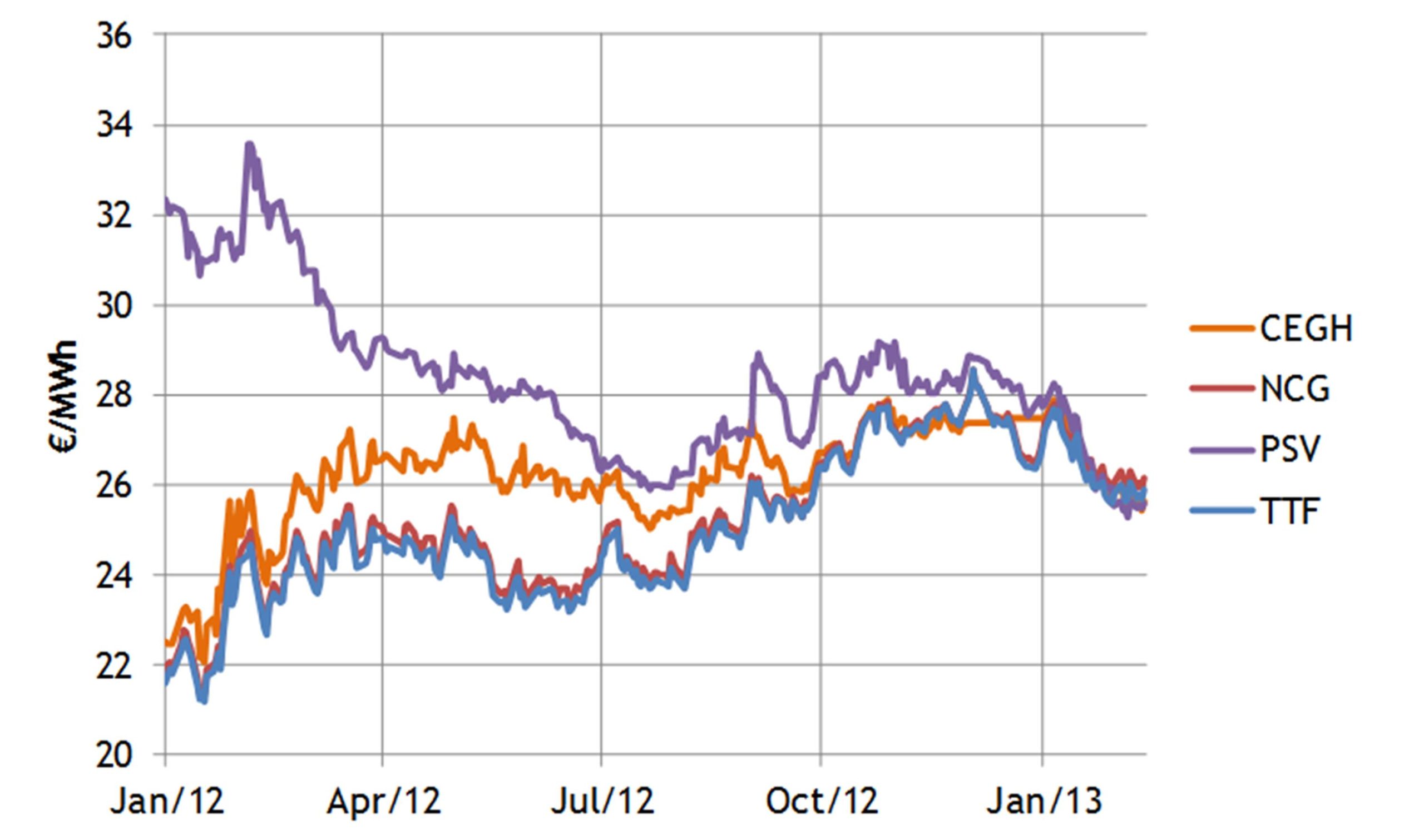 Liquidity at the PSV hub suffers from a number of flaws.  Capacity access to the main pipelines into Italy (e.g. Transitgas and TAG) is hard to come by.  The nomination and balancing rules are complex and opaque.  And perhaps most importantly, ENI as the incumbent supplier, dominates access to transport and flexibility infrastructure, while having little commercial interest in developing hub liquidity.  The Italian government has also displayed limited enthusiasm in its encouragement of hub evolution.

But poorer liquidity at PSV has not prevented rapid price convergence with North West European hubs over 2012 as shown in Chart 1.  Italian gas prices started 2012 at a 45% (10 €/MWh) premium to German hubs.  By the end of the year that premium had disappeared.  The key factor driving this price convergence has been the release of short term capacity on the TAG pipeline.  This has enabled large portfolio suppliers (e.g. E.ON, RWE) to divert long term contracted supply at Baumgarten, through TAG to be sold at the Italian PSV.

European Regulators may consider Italian convergence to be a feather in their cap as a they attempt to push towards greater gas market integration and efficiency.  But the rapid pace of PSV convergence is a timely reminder that market forces are a much stronger driver than incremental regulatory tinkering with market rules.

Italian price convergence illustrates the strength of hub price signal penetration in influencing commercial decision making.  As long as there is infrastructure to facilitate the flow of gas between two hubs, commercial incentives typically prevail.  This was concisely set out by none other than ENI’s Senior EVP of Trading (Marco Alverà) in a Q4 2012 analyst conference call:

“on the one hand, the increasing liquidity at the hubs is putting severe pressure on our commercial margins, on the other hand, this increased liquidity is giving us some benefits in negotiations as the suppliers are now finally coming to terms with the fact that liquid markets and hub markets are to be reckoned with and have to be taken into account into the [supply] contracts.”

With Spanish interconnector capacity to France due to be expanded to 5.5bcm this year, Spanish gas market convergence is likely to follow.