A surge in carbon prices is pushing up TTF gas prices & Asian spot LNG prices. This relationship is driven by switching in European power markets.

A carbon price surge in Europe pulling up LNG prices in China? This may sound like a case of the butterfly effect. But the current tandem rise in carbon and gas prices reflects an important linkage through the European power sector.

The carbon vs gas price relationship has come into focus this year as the result of surging carbon EUA prices. Carbon prices topped 25 €/t last Monday, a 142% move higher from the start of Q2 2018 (when prices were 13 €/t).

As carbon prices have increased, so has price volatility. After peaking on Monday last week, EUA prices fell 20% by Friday to close the week just under 20 €/t.

The TTF gas curve and Asian spot LNG prices have risen in parallel with carbon since Q1. They also fell in sympathy with the steep decline in EUA prices across last week.

The mechanics of this linkage between gas and carbon prices is underpinned by gas vs coal plant switching in European power markets, as we set out in this week’s article.

What is driving carbon higher

Carbon prices have rallied this year in response to finalisation of the Market Stability Reserve (MSR) measures.  The MSR has been a long time coming, but represents a clear mechanism to reduce the surplus of carbon credits that has built since the financial crisis.

Under the MSR, surplus carbon inventory will be removed at the rate of 24% a year across 2019-23. Culling of EUAs will then continue beyond this at a 12% rate.

The net impact of the MSR has been to reignite the requirement for market driven emissions abatement from the power sector.  In other words, the EUA market anticipates a shortage of emissions allowances, which needs to be cleared via higher prices.

The key mechanism driving carbon abatement at the margin, is the switching of coal units for CCGTs. Germany is particularly important given its large switching potential, with 28GW of installed hard coal capacity and more than 20GW of gas-fired capacity (currently running at relatively low load factors).

Rising carbon prices hurts coal plant competitiveness versus gas.  The carbon intensity of coal-fired units is more than double that of CCGTs (e.g. 0.85 vs 0.35 t/MWh of power produced). This means the variable cost of coal plants rises faster than CCGTs in response to a carbon price increase.

Everything else being equal, this carbon induced shift in competitiveness in favour of gas plants results in higher CCGT load factors. This in turn causes higher gas demand which acts to pull up European gas hub prices.

Movements in forward prices anticipate this relationship. In other words, a move higher in carbon prices is typically accompanied by a move higher in gas prices to maintain similar gas vs coal switching levels.  This dynamic can be observed in Chart 1. 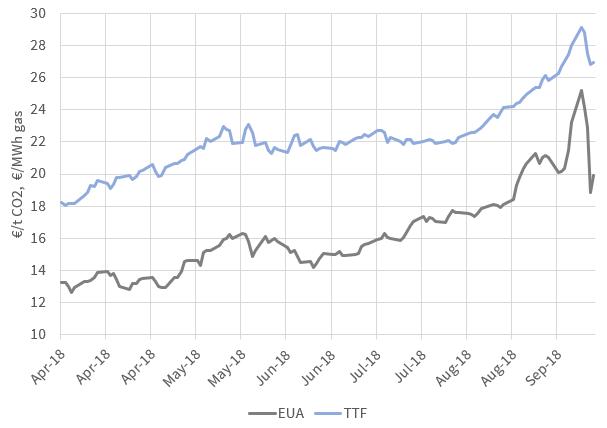 Front month carbon & EUA prices have been 94% correlated since the start of Q2 (with daily price returns 41% correlated).  The ratio of carbon vs gas price moves is not a ‘1 for 1’ relationship as it depends on the relative impact on gas vs coal plant variable cost.

The detailed mechanics of this carbon vs gas price linkage are quite complex.  They depend on the relative variable costs of coal vs CCGT units taking into account gas price seasonality, different unit efficiencies and supply stack variances across markets.

This complexity means there is not a simple formula that defines the relationship between carbon and gas prices. It requires detailed modelling of pan-European power markets as we set out here.

But there is a clearly observable correlation between carbon and gas forward prices that is driven by European power market switching boundaries.

The connection to LNG spot prices

Strong Asian LNG demand this year has opened up an Asia/TTF spread that has been ranging above the 1.50 $/mmbtu level required to divert significant volumes of LNG from Europe to Asia. Asian spot prices must rise with TTF to support this spread level, in order to maintain cargo diversions to meet Asian demand.

The fact that Asia is pulling LNG away from Europe strengthens the importance of switching levels in driving TTF pricing. When Asian and European gas prices are converged, LNG imports tend to dampen rising European hub prices.

But in 2018, cargo diversion to service inelastic Asian demand has created somewhat of a vacuum above European hub prices. That has seen the carbon price rise translate more directly into higher TTF prices.