The sharp ramp up in European hub prices across Q3 has fully reversed in Q4. We set out the current state of play and 5 factors behind this decline.

European hub prices doubled between July 2017 and September 2018.  50% of that move happened in Q3 2018. Through the objective barometer of market price, the European gas market has tightened significantly across 2017-18.

The big rally in gas prices between the current and previous summers was fuelled by:

We described these 3 key drivers of hub prices in a recent article published in October.

In Q4 there has been another interesting shift in gas market dynamics.  Gas prices have fallen back sharply from September levels and LNG is flowing back into Europe in a very different pattern to the onset of the last two winters.

In today’s article we provide a brief summary of why gas prices are falling and the current state of play heading into winter.

What is behind the Q4 price plunge?

Energy markets are rarely dull as illustrated by the evolution of global price benchmarks in Chart 1. TTF prices rose more than 25% across this summer (from around 8 to 10 $/mmbtu), only to reverse and give up those gains across October. As of late November prices look to be trying to stabilise around 8 $/mmbtu. 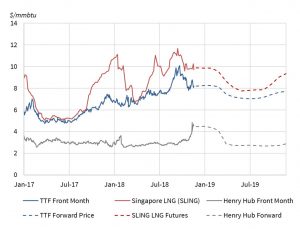 So why this sudden price reversal? To a large extent this comes down to the same drivers behind the Q3 price rise, only acting in reverse. The following is a summary of 5 factors behind the Q4 price decline:

The first two of these drivers illustrate the impact of global macro drivers on the European gas market.

The last three represent the practical mechanisms via which these macro drivers act on supply and demand balance and hub prices.  Q4 price dynamics are a great case study of the 3 key hub price drivers we set out in our October article.